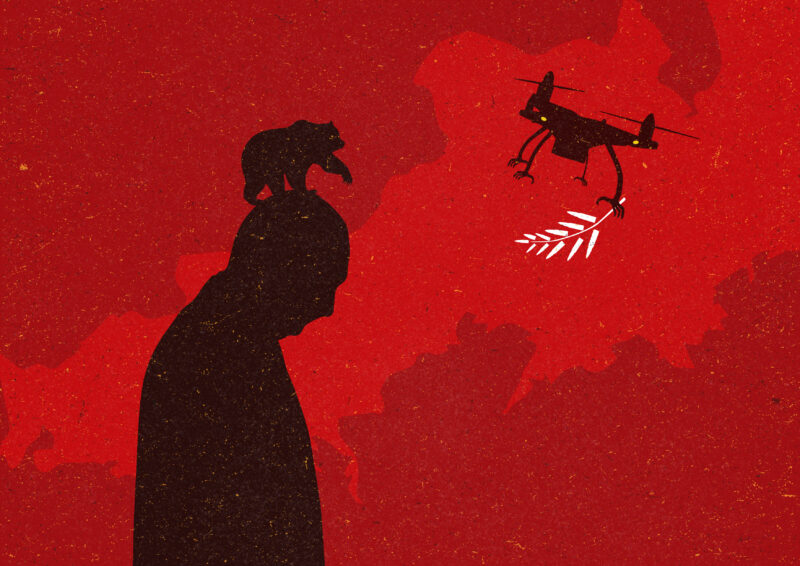 This story was originally published by Sbunker as part of the regional initiative Western Balkans Anti-Disinformation Hub, and was written by Fitim Gashi, with contributions by Demira Krujezi, Petrit Zogaj, and Bardhi Bakija. An edited version is republished in two parts by Global Voices with permission.

For more than two decades, Kosovo has been a contentious issue between the West and Russia. During the 1990s, Russia openly supported Serbia against Kosovo independence despite the fact that the Serbian state had launched and waged a number of wars in the Balkans, including the last war in Kosovo.

NATO military humanitarian intervention in Serbia and Montenegro in 1999 caused the biggest rift between the West and Russia. Since then, Russia has not ceased opposing developments in Kosovo, especially since Kosovo declared its independence. Blocking every initiative in the Security Council (where Russia is a permanent member) to amend Resolution 1244 is the clearest evidence of the Russian state's opposition to Kosovo. Russia’s position was further cemented with regard to initiatives for Kosovo’s membership in international organizations, such as the Council of Europe, Interpol, UNESCO, etc.

Just days before Russia's military strike on Ukraine, President Vladimir Putin, during a joint conference with the German Chancellor Olaf Scholz at the Kremlin, recalled NATO’s intervention in Yugoslavia in 1999, seeking to justify the attack on Ukraine.

In addition, Russian officials from Putin to Foreign Minister Sergeĭ Lavrov said that mercenaries from Kosovo were fighting in Ukraine. These statements were widely disseminated in the Russian state-controlled media, which have unhindered reach in Kosovo, as well. Kosovo institutions increased security alertness and imposed sanctions on Russia, which partially affected the field of information, too, blocking a number of Russian channels. Moreover, the alarms were raised that the Russian occupation of Ukraine could jeopardize Kosovo’s security, especially in the north where the full reach of sovereignty is lacking.

The war in Ukraine rekindled the diplomatic battles and mutual Kosovo-Serbia accusations. They were manifested mainly on social networks, and fake news was not lacking.

Kosovo was not immune to Russia’s hybrid war after the latter launched its large-scale invasion of Ukraine. The recurring tensions have resulted in Kosovo being viewed as a country with the potential for destabilization through poor neighborly relations with Serbia. In an interview with the “Russia Today” channel, Lavrov said that there was information that the countries of the Western Balkans were “recruiting mercenaries for US-instigated military conflicts.” Meanwhile, the Russian News Agency (TASS) quoted Lavrov as saying, “Kosovo and some other parts of the Western Balkans are becoming a fertile ground for crime. There are terrorists and drug dealers there.

Putin reinforced his subordinate’s statements after the talks with Scholz, when he said that the number of “mercenaries from Kosovo” was increasing in Ukraine. “Russia is registering a growing number of mercenaries from third countries, in particular from Albania and Croatia, militants from Kosovo and even jihadists with war experience from Syria,” the Kremlin said in a statement.

However, these allegations were denied by Kosovo institutions as misinformation by Russian officials. The Ministry of Foreign Affairs noted that Kosovo citizens are denied by law from participating in foreign wars, with severe penalties. The MFA has described the news coming from Russia as a fierce campaign against Kosovo and other Western Balkan countries with the goal of escalating the situation, through Serbia:

The statements of TASS news agency and Minister Lavrov are part of a fierce campaign of Russian propaganda whose goal is to divert the attention of the entire democratic world away from the anxiety that the Russian hegemonic politics and diktat is causing over the rights of peoples to a free and sovereign life. This fierce Russian campaign against Kosovo and other countries of the Western Balkans aims to, among others, create a tense situation in Kosovo and wider in the region through the Russian satellite in the Balkans, Serbia.

In an effort to blame NATO, media outlets such as Russia Today, Sputnik and TASS aired Putin’s and Lavrov’s statements accusing the North Atlantic Alliance of bombing Serbia in 1998-1999. According to Lavrov, Russia finds it difficult to believe that NATO is merely a defense alliance, “given its bombing campaign in the former Yugoslavia in 1999.” He said that the bombing did not bring prosperity to Kosovo. He made these remarks while talking about the meeting between Scholz and Putin on February 15.

Meanwhile, in a joint conference with his Polish counterpart Zbignier Rau, Lavrov said he hoped that the countries that wanted to withdraw from the Organization for Security and Co-operation in Europe (OSCE) had good reasons to do so, in order that “the bad experience of 1999 not be repeated.” Here Lavrov was referring to the Reçak massacre which he, in the same vein as Serb officials, called a fabrication.

To prevent the spread of misinformation, the Independent Media Commission temporarily removed broadcasting channels originating in the Russian Federation.

According to the IMC’s press release, the decision was made in order to stop Russian propaganda and protect Kosovo’s public safety. Although the IMC did not specify which channels were affected by the decision, it was reported that they included Russia Today (RT), Russia 24 and Planeta RTR.

In any case, this decision was not extended to online platforms and social networks. Web pages owned by the Russian state, such as Russia Today and Sputnik are still accessible. After the Russian aggression in Ukraine, numerous articles and news reports were distributed that made analogies between the war in Kosovo in 1999 and the developments in Ukraine. In one of them, criticizing Russia for the invasion of another country was described as hypocritical, as according to them, NATO had done the same when it bombed the former Yugoslavia.

The oversight of online space in Kosovo is under the purview of the Electronic and Postal Communications Regulatory Authority (EPCRA). Through internet operators (ISPs), it can technically block the Russian websites from being accessed within the territory of Kosovo. But for that to happen, an official request from the government has to be made to close the pages originating in Russia. According to officials of this authority, no request has been made so far.

The Press Council of Kosovo has also warned media officials to be as careful as possible when reporting on the war in Ukraine.

This is the first part of the report. Read Part 2 here.