"This Sri Lankan uprising is following its own unique, local model" 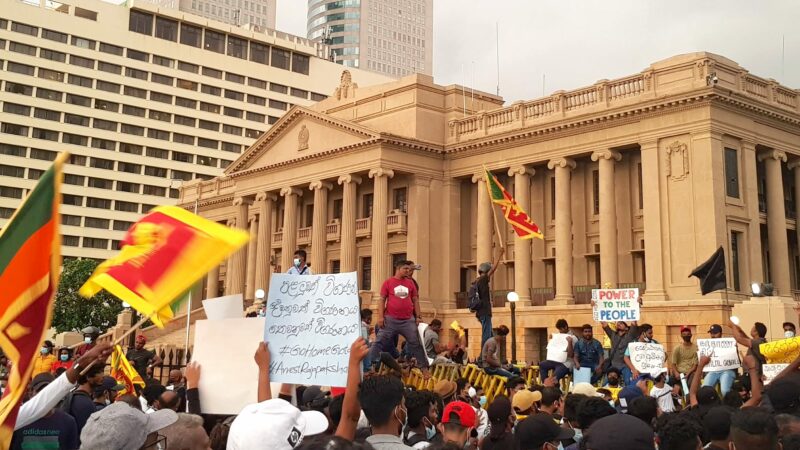 Peaceful and spontaneous protests have intensified across Sri Lanka over the past few weeks since March 31, 2022. The general public, including students, teachers, doctors and other professionals as well as the opposition parties organised separate protests across the country, the highlight of which is the protest at Colombo’s Galle Front. Their only demand is that President Gotabaya Rajapaksa and his brother Prime Minister Mahinda Rajapaksa should resign immediately over mainly their mishandling of the economy that had led to the current economic crisis in Sri Lanka.

To quell the public uprising, President Gotabaya Rajapaksa declared a state of emergency on April 1, 2022, and major social media platforms (Facebook, YouTube, Twitter, WhatsApp, Viber etc.) were blocked for around 16 hours on April 3.

Amidst protests, all 26 ministers of the Sri Lankan cabinet resigned on the night of April 3, and the state of emergency was withdrawn on April 5.

The Rajapaksa brothers still refuse to step down and offered to meet with protesters on April 13 to discuss their ideas for resolving the current economic, social and political crisis in Sri Lanka.

Sri Lanka is reeling from its worst financial crisis since independence in 1948, as foreign currency shortages due to the inept handling of the economy hampered the import of food, fuel, medicine and other essential items. Shortages of fuel, rolling blackouts, gas and medicine, and higher costs of food have made normal lives miserable. On April 12, 2022, Sri Lanka declared that it is defaulting on its USD 51 billion foreign debt.

The protests have been observed as spontaneous and leaderless as the usual suspects who organize protests — such as the unions and student groups — were not seen. Some political parties have mentioned that they will not join protests by unknown or anonymous groups.

As of April 14, there have been 240 protests of different sizes around the country by different social groups according to Watchdog’s protest tracker. These include protests by fisherfolk in Galle and Ambalantota, carpenters in Moratuwa, private bus drivers in Anuradhapura, health workers of the Kandy, Kegalle and Mullaitivu hospitals, Free Trade Zone workers in Katunayake, and public protests in Akkaraipattu, Balangoda, Bandarawela, Batticaloa, Dambulla, Gampola, Habarana, Hambantota, Jaffna, Kandy, Kelaniya, Kurunegala, Mannar, Matara, Minneriya, Mullaitivu, Nuwara Eliya, Panadura, Ragama, Thihariya, Vavuniya, Walasmulla and Yakkala.

Social media spaces are occupied by people sharing images, slogans, poems, cartoons etc., and hashtags like #GoHomeGota2022 or #GoHomeGota are trending. The #GoHomeGota2022 campaign even has a website. However, some government-sponsored actors have launched a counter-campaign called #WeAreWithGota to engage in a battle of the hashtags.

Meanwhile, on April 1, Social media activist Anuruddha Bandara was arrested for running a Facebook page called “Gota Go Home.” He was released on bail on April 3.

Some protesters are also using innovative tactics, like this, as entrepreneur Farhan tweeted:

Galle Face, a 12-acre urban park along the coast in the capital Colombo is the most happening place with thousands of anti-government protesters. On April 9, tens of thousands of protesters started to gather in the afternoon defying the order of closure of the premises. The ‘#OccupyGalleFace’ movement has only one demand: they will stay there “until Rajapaksa resigns.” Citizen journalism platform Groundviews posted some images of the protests. The protest site was renamed “Gota-Go-Gama.”

#GotaGoHome echoes across Galle Face as Protesters call for the immediate resignation of the incumbent government and its President. #EconomicCrisisLK #GoHomeGota #GoHomeRajapakshas #SriLanka #LKA https://t.co/7sza97k7IB

These protests, mainly led by the youth, including students, teachers, doctors and other professionals, are peaceful and innovative. The protesters are wary of politicians, both from the ruling party and the opposition. Dozens of tents have been erected to shelter them from the rain and sun, and more are  on stand-by. Professionals such as artists, cricketers and musicians are also joining the protests. Sympathetic supporters are regularly donating water, food and medicines, and mobile toilets were set up.

Some media are comparing these grassroots protests to the Arab Spring movements.

MASSIVE turnout for #OccupyGalleFace protest in Colombo. Crowds are growing by the minute. If you are making your way to the #අරගල භුමිය , park somewhere else and walk.. it'll save time and fuel…. Don't worry about food and water, there's plenty for everyone

A police officer who joined the protests was briefly arrested and then granted bail on April 15.

The IGP and Govt are in a real catch-22. If this cop protesting at #GotaGoGama is suspended, public anger towards Rajapaksas will increase further. But if no action is taken against him other cops will be emboldened to protest themselves. #OccupyGalleFace #lka #SriLanka pic.twitter.com/rmgMZDvuZk

As of April 16, the occupy protest has reached its 8th day. According to Professor Hiroshan Hettiarachchi, this Sri Lankan uprising is following its own unique, local model.

The protests saw national unity between the Muslims, Buddhists, Hindus and Christians and between Sinhala and Tamils as they came together for the protest:

According to web administrator Daniel Alexander:

It's so pleasing and beautiful to see Sri Lankans around Sri Lanka from every religion joining Muslims daily in iftar during the peaceful protests against the government. Unity is our strength. They're trying to divide us and we are united to send them home. 🇱🇰 #SriLanka pic.twitter.com/3peZ9fGMdT

There is even music:

The #OccupyGalleFace protests are also gaining support from elsewhere in the country:

Ambika Satkunanathan at Groundviews debunks the criticism of the Occupy Galle Face movement:

Criticism of Occupy Galle Face has also centred on its methods. That protestors are not taking it seriously, that there is song and music. That “it is like a party”. These comments demonstrate a failure to understand the multi-faceted nature of protests and the fact that protests will always have those who come along for their own purposes. Galle Face turning into “a carnival” has perhaps broken the taboo on protesting, especially the middle-class aversion to and disdain for protesting on the streets.

The Sri Lankan opposition has rejected Rajapaksa's offer for a unity government and threatened to bring a no-confidence motion against the Rajapaksa government if it fails to solve the public concerns. A new finance minister has been appointed and the rest of the cabinet are expected to be appointed and to be sworn in on April 18, 2022, Monday.

On April 17, 2022, a Sri Lankan delegation headed by the new finance minister Ali Sabry travelled to the USA to discuss with the International Monetary Fund (IMF) the bail-out package of USD 4 billion Sri Lanka sought earlier. Meanwhile, several community-driven initiatives have popped up to help Sri Lankans in need.