Academics and booksellers push back to defend freedom of expression 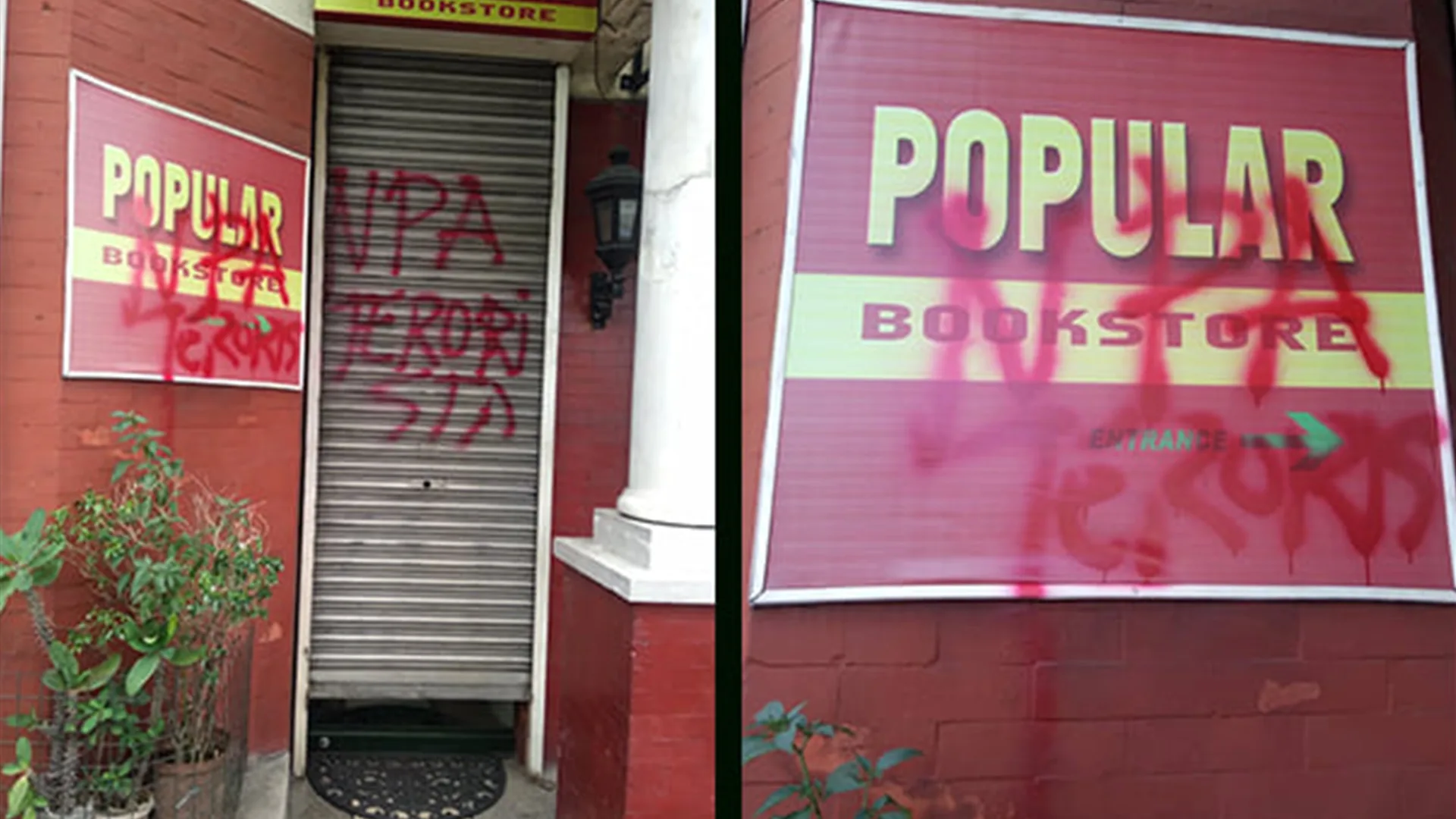 In late March, Popular Bookstore in Quezon City and Solidaridad Bookshop in Manila City, two independent bookshops in the Philippines’ National Capital Region, became the latest targets of red-tagging: the practice of labeling individuals and organizations as radical, left-leaning communists, thereby framing them as subversive or terroristic to delegitimize and justify violence against them. Red-tagging has a long history in the Philippines.

Popular Bookstore’s signage and façade were vandalized with the words “NPA terorista” on March 22, 2022. This slogan refers to the armed wing of the Communist Party of the Philippines (CPP), the New People’s Army, which was designated a terrorist group by the Rodrigo Duterte government. The Solidaridad storefront was likewise spray-painted red on the morning of the same day.

A wide array of academics, booksellers, publishers, and civil society organizations have denounced the red-tagging of the two independent bookstores as an attack on free speech and academic freedom.

For Academics Unite for Democracy and Human Rights, an alliance of Filipino teachers, researchers, school administrators, and other education workers, it is no surprise that enemies of critical thinking and dissenting ideas should target one of the few remaining bookstores in the Philippines selling titles with intellectual substance and other hard-to-find books:

Bookstore shelves are snapshots of how a nation thinks at every moment of its history. Bookstores with shelves empty of books or filled only with books containing a single idea or no ideas whatsoever reflect a nation's deep intellectual poverty. #HandsOffPopularBookstore pic.twitter.com/YnjTXVyguP

Founded shortly after the end of World War II, Popular Bookstore is no stranger to red-tagging—its owners were victims of anti-communist witch hunts in the 1950s for selling Marxist books. Solidaridad, founded by novelist and national artist F. Sionil Jose in 1957, is a long-time favorite haunt of writers, artists, and freethinkers in the nation's capital.

Only those who fear knowledge and learning are threatened by bookstores like Popular Bookstore and Solidaridad. This comes after the purging of books in libraries in the #Philippines by the NTF-ELCAC.

The Congress of Teachers/Educators for Nationalism and Democracy (CONTEND), an organization of progressive faculty and academic employees at the University of the Philippines, points fingers at the Duterte government’s National Task Force to End the Local Communist Armed Conflict (NTF-ELCAC) as the only possible culprit behind the red-tagging of the bookshops.

Starting in September 2021, NTF-ELCAC and the Armed Forces of the Philippines (AFP) initiated the removal of so-called “subversive” books from libraries in several state-run universities and colleges. The books targeted include documents on the peace negotiations with the CPP’s political arm, the National Democratic Front of the Philippines (NDFP), as well as other titles on the communist insurgency and Marxism in the Philippines.

Red-tagging had been a regular feature of Philippine politics since the period of American colonial rule in the early 20th century. American colonizers and local elites instilled anti-communist ideology to suppress the spread of what they perceived as a major threat to American-style capitalism and contain its power to mobilize workers and farmers in a society with extreme class divides.

One of the early cases of red-tagging in the country occurred in 1927 with the deportation of Tan Malaka, an Indonesian independence fighter and leader of the PKI, the Indonesian Communist Party, who was in and out of the Philippines to escape Dutch repression and help organize Filipino workers.

Because of his socialist convictions, Malaka was painted by US officials as a danger to the colony’s security and variously called a “Javanese Red” and a “Bolshevik Agent” in the newspapers of the day.

Inspired by the 1917 Russian Revolution, radical unionists led by Crisanto Evangelista founded the old Communist Party of the Philippine Islands (PKP) in 1930 to advance workers’ rights and welfare and work for immediate independence from American rule. Just a year into PKP’s existence, the party was illegalized, and its leaders and members were arrested in a crackdown by colonial authorities.

After the Second World War, the government of the Philippines, which had just been granted independence by American authorities in 1946, trained its sights on the communist-led Huk peasant rebellion in the rural heartlands of Central Luzon north of the capital Manila, and conflated all dissent and expression of left-wing politics with the “Red Menace.”

It was not just communists who were targeted, but anyone who questioned pro-American policies.

The Huk rebellion was crushed due to a mix of strategic errors and massive state repression during the 1950s. But young radicals who came of age during the explosion of unrest and resurgence of activism in the 1960s re-established the Communist Party of the Philippines in 1968 and launched what they called a “people’s war” to achieve national democracy with a socialist perspective.

From Marcos to Duterte

In response to the intensifying social crisis engulfing the country, President Ferdinand Marcos imposed martial law in 1972 and ruled as dictator until his overthrow in a 1986 uprising.

Anti-communism was a key plank of the Marcos dictatorship, which systematically repressed the brewing social unrest while allowing the dictator's family and cronies to amass tremendous wealth and power. Backed by millions of dollars in US military aid, Marcos’s counterinsurgency war in the countryside launched brutal “search and destroy” operations and the forced displacement of the rural population into “strategic hamlets” to flush out communist rebels.

Thousands of activists and opponents of the dictatorship, many of them red-tagged as “communist-terrorists,” became part of a brutal statistic of over 70,000 warrantless arrests, 30,000 tortures, and 3,257 extrajudicial killings.

Yet the fall of the Marcos dictatorship and the relative expansion of democratic space did not mean the end of red-tagging. Leaders of following administrations, from Corazon Aquino to Duterte, implemented a series of counterinsurgency programs patterned after US Low-Intensity  Conflict (LIC) and Counterinsurgency (COIN) doctrine.

The counterinsurgency campaigns that followed have not only targeted rural-based armed rebels, but also rural villages suspected to be rebel “mass bases” and civil society organizations red-tagged as “communist front organizations.” This anti-communist campaign came to a head with the rise of Duterte, who in 2018 announced his intention to repeat Indonesian dictator Suharto’s anti-communist genocide that killed at least 500,000 in Indonesia in 1965, and with the looming return of the Marcoses to the presidential palace in the upcoming election. The slide to authoritarianism was further solidified with the enactment of the draconian 2020 Anti-Terrorism Law.

The repercussion of these actions on democracy and human rights is staggering, as the entire state machinery is enlisted in red-tagging all forms of dissent. State-sponsored anti-communism has reached absurd heights, to the extent that even the campaign of the leading opposition candidate in the May 2022 presidential elections, outgoing Vice President Leni Robredo, has been red-tagged by the NTF-ELCAC as communist-backed.

A string of charges have been filed against officials of the NTF-ELCAC by civil society organizations and the families of red-tagging victims. The targeting of Popular Bookstore and Solidaridad is but the latest in a long and brutal history of red-tagging and state repression of dissent and critical thinking in the Philippines. But the whipping up of anti-communist hysteria is also stoking Filipinos’ long tradition of tyrannical resistance.

Disclosure: The author, an assistant professor at the University of the Philippines Diliman, is a member of both CONTEND and the Academics for Democracy and Human Rights.