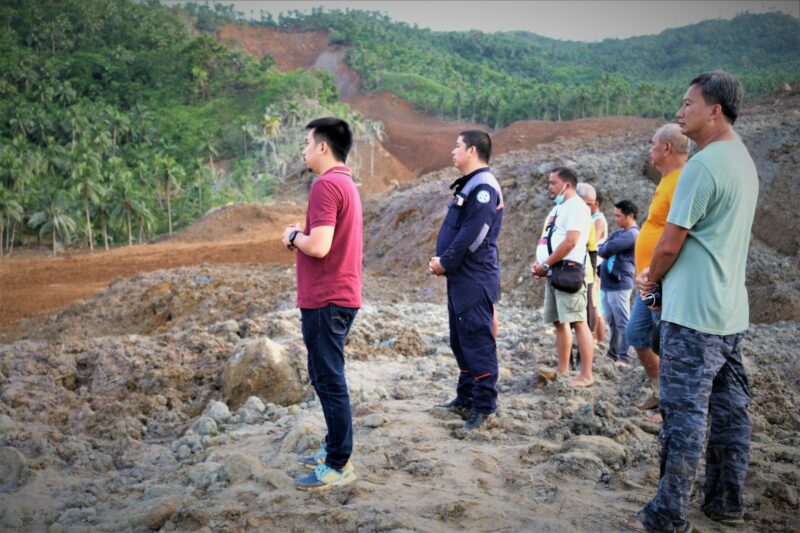 Local officials inspect the damage caused by a landslide in Abuyog, Leyte. Photo from the Facebook page of Congressman Carl Cari.

More than 100 people in farming and coastal communities in the eastern Philippine island of Leyte were killed in landslides and floods brought about by tropical storm Megi (local name Agaton) which touched down over the country over the weekend.

Many Filipinos weren't aware of the destruction for days, since most local social media reports and news coverage have been consumed with the ongoing national election. Internet and electricity were also unreliable for several days. Many were surprised to learn about the disaster since it is unusual for strong storms like Megi to hit the Philippines until the second half of the year.

According to local officials, the death toll in Baybay City and Abuyog town, both in Leyte, has climbed to 137 people as of April 15, 2022. Many more are missing and feared dead after Megi, which was the strongest typhoon to hit the country this year, and caused several days of heavy rains in various parts of the Visayas and northern Mindanao.

Leyte was hit the hardest. A landslide in Abuyog town’s village of Pilar, which is surrounded by the sea on one side and a mountain on the other, flattened almost a hundred houses with mud and fallen trees on April 12, 2022 — nearly every home in the village.

According to news reports, authorities were trying to cross through roads that were blocked by debris to evacuate hundreds of stranded people on the second day of flooding when the landslide happened.

Local officials added that 86 people were also killed and many more injured in the rural areas surrounding Baybay City, Leyte. Hundreds more are missing across Leyte.

Netizens used the Twitter hashtag #AgatonPH, after typhoon Megi’s local name, to share updates on the impact of the tropical storm in affected areas. These are some photos showing the impact of Megi shared by some netizens:

LOOK: Several barangays in Jipapad, Eastern Samar were flooded due to the incessant rains caused by #AgatonPH.

Not only houses were flooded but also some public structures as the municipal gym | 📷 by Vicky Abestros/MDRRMO@rapplerdotcom@MovePH pic.twitter.com/OtdFCewHPS

There are also casualties in other parts of the country: three were drowned in Mindanao, another three were killed in Negros, and one more in Iloilo. Various parts of the Visayas were inundated with floods that wiped out crops, destroyed homes, and forced thousands of people into evacuation centers.

We really need your help rn. These rescuers were supposed to deliver relief goods for the victims but the current of water were too strong and out of control that's why this happened. #CapizNeedsHelp #Capiz #AgatonPH pic.twitter.com/k4RlfuBQpo

#CallForHelp Sara, Iloilo is one of the towns ravaged by the flash flood caused by #AgatonPH. NIPSC Campus in Sara was very devastated. Tulungan natin ang mg apektadong kabataan who are just resuming their F2F classes when the typhoon hit. pic.twitter.com/3LaZ4iboCp

Disaster response and relief efforts are currently ongoing, with some netizens sharing details of these activities online. News site Rappler is gathering a running list of such efforts to help communities affected by typhoon Megi.

This drone video captured images of a destructive landslide on Leyte