Presidents may only serve two terms under Indonesia's constitution 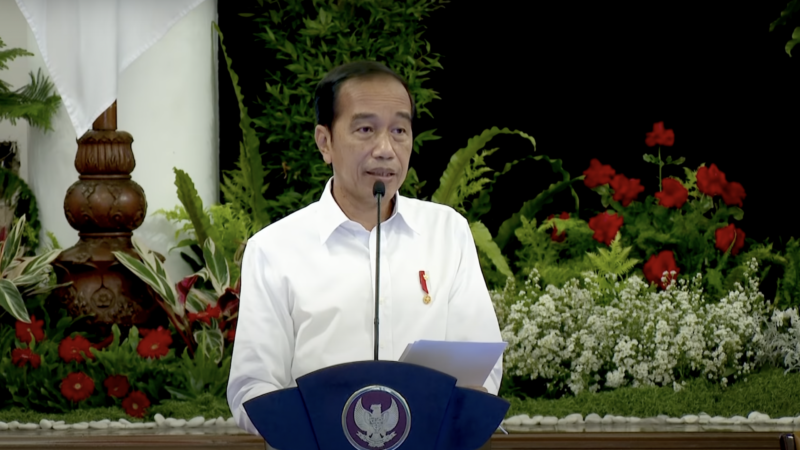 Indonesian President Joko Widodo (Jokowi) at a Cabinet meeting on April 5, where he told his aides to stop suggesting he runs for a third term. Screenshot via the Sekretariat Presiden YouTube Channel.

As the world continues to grapple with the fallout from the COVID-19 pandemic, with added stress due to the war in Ukraine and the subsequent goods shortages, some politicians have been calling on Indonesian President Joko Widodo (Jokowi) to extend his presidential term beyond the two-term legal mandate or postpone the 2024 election. Amid the growing chatter, Jokowi himself was filmed ordering his aides to drop the idea, saying:

“Nobody brings up the matter of [a term] extension nor [elections] delay anymore. No more.”

He issued the order during a Presidential Cabinet meeting on Tuesday, April 5, telling his aides to address the nation’s rising inflation rate instead of stirring controversy around the 2024 election.

He notably did not rule out the idea entirely, remarking that he plans to adhere to the Indonesian constitution. However, those who support the idea suggest his term could be legally extended through either a constitutional amendment or an election delay.

Based on the current constitution, Presidents in Indonesia are allowed to serve a maximum of two five-year terms. Jokowi is approaching the twilight of his second term and as of now, would be unable to run for a third.

However, the idea has been gaining momentum in recent weeks after several high-profile officials, including influential minister Luhut Pandjaitan, backed the idea, causing widespread debate and controversy in the nation.

During an interview Luhut claimed social media data indicated a majority of Indonesians support extending Jokowi’s term: “My personal opinion, I feel like it will be better. If he (the president) gets an extension…just once.”

However, a poll by the Saiful Mujani Research and Consulting (SMRC) shows that more than 70 percent of Indonesians reject the extension plan.

Media spokespeople have also been critical of the idea. On March 7, senior editor for The Jakarta Post Endy Bayuni wrote an op-ed criticizing the suggestion that Jokowi should extend his term, calling it “subversive” and a “sure recipe for the end of democracy.”

The President needs to rebut media reports circulating that the initiative to launch the discourse on delaying the elections came from his office. Keeping mum only reinforces the rumors. It is shocking to hear that an idea that clearly would undermine the democratic political processes should come from those holding the highest offices of the nation. … They are betraying the Constitution that puts trust in political parties to support democracy, and not to subvert it.

Supporters say an extension is necessary because it would streamline Indonesia’s economic recovery after the sharp dip caused by the COVID-19 pandemic and allow the president to implement his agenda, including his USD 35 billion capital relocation project.

Throughout his career, Jokowi has been known for his strong economic policies. He had hoped to use this term to bolster the nation's economic development and establish Indonesia as a high-income nation. But in the last two years, Indonesia has been grappling with rising inflation and a recession due to the COVID-19 pandemic, causing it to drop from an “upper-middle-income country” to a “lower-middle-income country” according to World Bank classifications. So it is of little surprise that some Jokowi supporters might want to give him more time to carry out his planned reforms.

Additionally, recent reports indicate Jokowi is wildly popular in the archipelago, with an over 70 percent approval rating, according to reporting from Kompas, a top online publication in Indonesia.

Despite his popularity, some worry about what the debate about terms could mean for the world’s fourth-largest democracy.

the fact that we are actually discussing term limit extension in the first place is deeply concerning, regardless of what Jokowi said

*at the very least*, this means Jokowi is surrounded by people who think they are above the law https://t.co/7ZiFm4nqoe

Critics say the move is reminiscent of Suharto-era policies and would be a major backslide for Indonesia's democratic reforms. Suharto ruled Indonesia for over 30 years through an authoritarian, often violent regime, until he was ousted in 1998. After Suharto's reign, the nation turned to democratic ideals and implemented a series of laws and restrictions — including term limits — to prevent a repeat of its authoritarian past.

The growing chorus of officials around #Jokowi calling for an extension of his term in office are tragically destroying a beacon of hope for democracy in #Asia. Shame on them. #merdeka

Others condemned the President’s apparent reluctance to take a firmer stance on the issue. Edbert Gani, an analyst at the Center for Strategic and International Studies in Jakarta, told Reuters:

What's so hard for the president to say: ‘I reject the term extension, I reject delaying the election, I don't want to run for a third term'? It's difficult for the public to guess the real situation if the president doesn't make a very clear statement.