Bolsonaro distanced himself from Brazil's positions at the UN 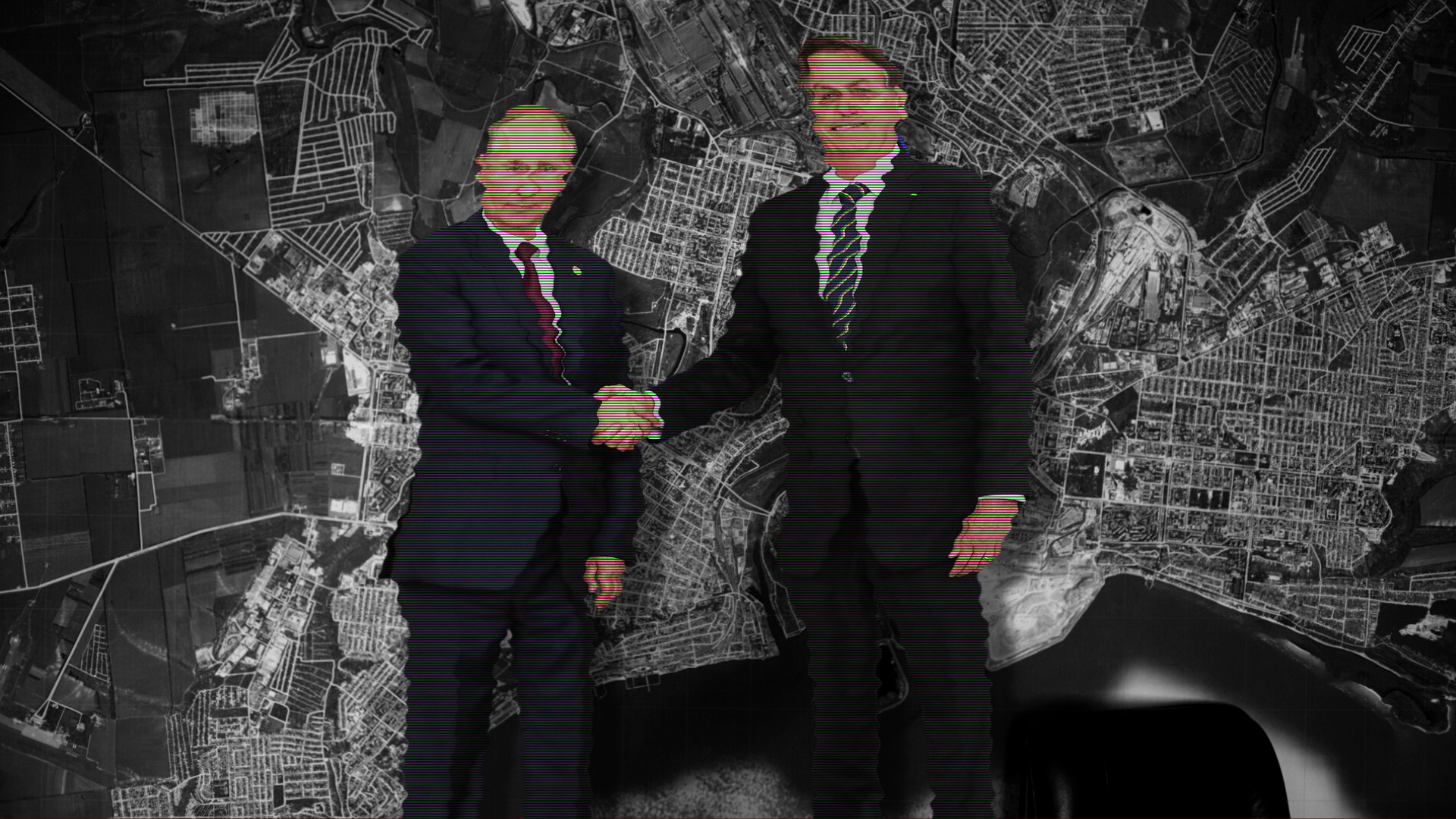 Bolsonaro and Putin at a meeting in Brasilia in 2019. Main image: Marcos Corrêa/PR, aerial photo of part of Ukrainian territory: Ivan Sigal/Global Voices

A week before the invasion of Ukraine, Vladimir Putin appeared on camera alongside an official visitor to Russia — Brazilian president Jair Bolsonaro.

The situation on the Russia-Ukraine border was already tense and had the world on high alert. During the visit, Bolsonaro said that Brazil was in solidarity with Russia and that the two countries had a lot to collaborate on, citing agriculture, oil, and gas, according to CNN Brazil.

Next to the Russian president, Bolsonaro said he “preached peace and respected those who acted that way.”

At other points, he also said that he had the impression of a perfect marriage, called Putin a “friend” and stated that the two shared values such as “God and family,” according to the news outlet UOL.

Less than ten days later, a week into the invasion of Ukraine, when images of attacks on civilians were already shocking the world, Brazil was among the 141 countries to vote in favour of condemning Russia at the United Nations General Assembly. Brazil also currently has a seat on the Security Council.

The Brazilian ambassador Ronaldo Costa Filho explained the decision by saying that “a line had been crossed.”

The Brazilian president, however, still seemed to resist speaking out clearly about the war, sparking criticism even from conservative supporters.

When Vice President Hamilton Mourão, a reservist general, said that “Brazil was not neutral,” that the country respected Ukraine's sovereignty and supported the West's “forceful stance” against Russia soon after the invasion, Bolsonaro disavowed him.

In his weekly live broadcast on social media on Feb. 24, without mentioning the vice president's name, the president pointed out who was in charge according to the Constitution and said that Brazil was committed to peace.

“It is my decision, but I want to hear from people who are actually ministers to deal with these issues. We are for peace, we want peace. We traveled in peace to Russia. We had an exceptional interaction with President Putin,” he said, according to the Power360 website.

Hours later, he went on his Carnival break, on the São Paulo coast, where he took a jet ski ride.

In Bolsonaro's words, reinforced by Brazil’s chancellor Carlos França on March 8, the position remains one of neutrality, without condemning the invasion or “taking sides.”

In early March, Brazilian journalist Jamil Chade revealed that a plan to evacuate Brazilians living in Ukraine — around 500 people — was avoided by the government before the conflict started so as not to affect Bolsonaro's planned trip to Moscow.

As Putin's government claimed it had no intention of attacking Ukraine, any move to warn Brazilians to the contrary could appear to show a lack of trust in the Kremlin's word, Chade said.

Since Bolsonaro is unvaccinated against COVID-19, he underwent five tests to be able to meet Putin and resume “the relations that were interrupted by the pandemic,” as the Russian president put it. Bolsonaro insisted that the focus of the meeting was not Ukraine and showed solidarity with Russia.

The leaders and their translators discussed bilateral agreements favouring the energy, environment, defence, science and technology, education, and culture sectors.

They also talked about increasing the supply of Russian fertilizers, the main Russian import to Brazil. In early February, a Russian group was negotiating the purchase of a fertilizer plant from state-owned Petrobras. Negotiations are still ongoing.

Before the invasion of Ukraine, Bolsonaro's supporters even shared memes on social media associating his visit with a withdrawal of Russian troops from the border.

When the attacks began, the Brazilian tourism minister said that Putin had not heard Bolsonaro's message of peace — the same minister, Gilson Machado, had previously claimed that the Brazilian president had convinced Putin not to start a war.

According to Brazilian media reports, military figures that are part of the government advised Bolsonaro to stand by Putin.

A report in the Folha de S. Paulo newspaper also said that the government and the country's agricultural sector had decided to include "gestures to Russia" in statements, "which reflect arguments made by Putin's government."

"Foreign negotiators, when raising this concern with Brazilian authorities, receive the response that the country is against the violation of Ukrainian borders — but that this does not oblige it to fully subscribe to the Western powers' course of action and that Itamaraty's position has been coherent," the report stated.

Economists assess, though, that the "neutrality" policy adopted may have a negative impact on Brazil.

On March 2, journalist Lauro Jardim published, in Globo newspaper, the story that in WhatsApp groups Bolsonaro was more open about what he thinks, reportedly having shared a message including a conspiracy theory about a New World Order, in which only Russia, China, and the Arab League would be able to confront.

"The same people who want the Brazilian president to take a firm position on the Russia vs. Ukraine conflict, are those who want to take the Amazon from us," reads an excerpt, according to the columnist.

Running for re-election in the October elections, Bolsonaro has been lagging behind former president Luiz Inácio Lula da Silva of the Workers' Party (PT) in the polls.

Although he has supported accusations that cast doubt on the security of Brazil's electronic voting machines — a system in place for over 20 years, and through which he was elected as congressman and president — Bolsonaro denied that he had discussed the issue of electoral security with Putin.

"This is not a matter to be dealt with outside Brazil, with all due respect. If anybody makes any inference in this direction, in my understanding they are overstepping their role," he told the newspaper Estado de S. Paulo, while in Moscow in February.

The President of the Brazilian Supreme Electoral Court (TSE), Minister Edson Fachin, has already said he is studying Russian cyberattacks which have taken place in elections around the world.

The "neutrality" espoused by the president in this war made it into Brazilian Twitter’s trending topics on Feb. 27, the day Bolsonaro made his statement on Brazil's position.

It is estimated that around 600,000 people of Ukrainian descent live in Brazil today. The Ukrainian Society of Brazil (Subras) published a statement saying that "as Brazilians, [they were waiting] for a position from our representatives."

Speaking to the UOL outlet, the president of the Ukrainian-Brazilian Central Representation, Vitorio Sorotiuk, said Bolsonaro did not respond to President Volodymyr Zelensky's invitation to visit Ukraine as part of his trip to Eastern Europe. The Brazilian presidency did not speak with the report.

"Bolsonaro offended the president of Ukraine and turned his back on us," Sorotiuk said.

For the chargé d'affaires of the Ukrainian embassy in Brazil, Anatoliy Tkach, President Bolsonaro is "ill-informed" about the war.