The Russo-Ukrainian war and official response across Central Asia 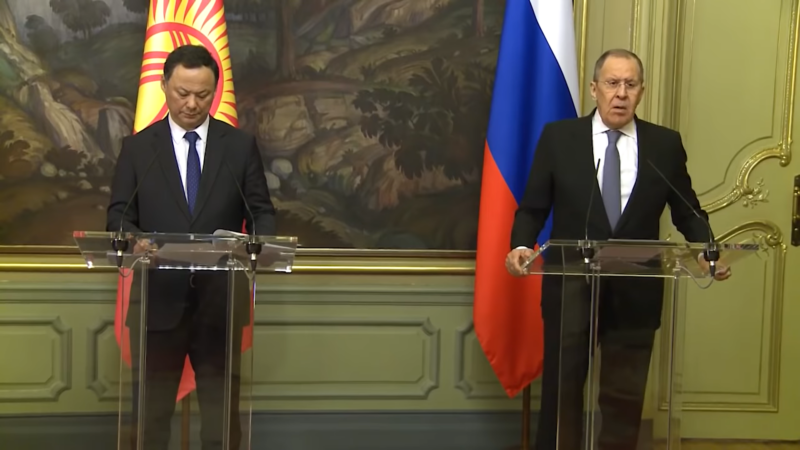 Joint press conference of the Kyrgyz MFA Ruslan Kazakbayev (on the left) and Russian MFA Sergey Lavrov (on the right). Moscow, March 5, 2022. Screenshot from the Ministry of Foreign Affairs of Russia YouTube channel

The Russian invasion of Ukraine and the way it escalated into a full-fledged war unraveled the foundations of Central Asian economic, political and strategic architecture, forcing the governments and citizens to take a stance and choose sides in this new “lose-lose situation.” Along with long-lasting economic, social, and political interactions between Russia and post-Soviet Central Asian states, three (Kazakhstan, Kyrgyzstan, and Tajikistan) are members of the Collective Security Treaty Organization (CSTO), the Russia-led military alliance, while two (Kazakhstan, Kyrgyzstan) are full members of the Eurasian Economic Union (EAEU). On top of that, remittances, predominantly from Russia, make up almost a third of Kyrgyzstan's GDP, while Kazakhstan is the only Central Asian state to share land borders with Russia, it is also home to more than 18 percent of the ethnic Russian population.

Under these circumstances, each state responded differently to the war — from ignoring it altogether to incorporating their national interests into it, adapting, in the meantime, to the changing course of the war, while trying to withstand Russian pressure.

As Akylbek Japarov, the Chairman of the Cabinet of Ministers of Kyrgyzstan, uneasily summed up:

I would be honest, from all sides they demand some determination. They demand that we choose sides in this conflict.

On February 22, 2022, following the Russian recognition of the separatist entities in Eastern Ukraine, Kyrgyz President Sadyr Japarov commented that Russia was, perhaps, compelled to recognize the independence of the two breakaway regions to protect the civilian population of the Donbas region, where many Russian citizens reside. He approvingly added that recognizing any state is a sovereign right of any country.

A similar apologetic stance was taken by Mukhtar Tleuberdi, the Kazakh Foreign Minister, as he not only mentioned the West's failure to duly respond to the Russian agreement proposals to the US and NATO, but brought in “the humanitarian crisis in the Donetsk and Luhansk republics.” He, nevertheless, assured that “the question of Kazakhstan's recognition of the Donetsk People's Republic and Luhansk People's Republic was off the table.”

On February 24, the day Russia invaded Ukraine, the meeting of the Eurasian Intergovernmental Council (EIC) representing the heads of governments of the EAEU was held in the Kazakh capital Nur-Sultan. The extended coverage of this event comprised of standard integration rhetoric and economic statistics, totally ignoring the elephant in the room.

As could be expected, amidst the massive bombardment of Ukrainian cities, all eyes were on Russian Prime Minister Mikhail Mishustin, who, along with the EIC meeting, had separate meetings with President Tokayev, whose official website mentioned joint measures to prevent the decrease of trade volume amidst the escalation of the conflict in Ukraine and launch of anti-Russian sanctions. He also met with Alikhan Smailov, the newly appointed Kazakh Prime Minister. However, unlike the official Kazakh report, which preferred to skip the conflict altogether and focus on economic matters, the Russian news agencies recurrently aired Mishustin­ ambiguously stating:

Western countries try to disunite us from time to time, and by being here in this difficult time we say to everyone that we are together. 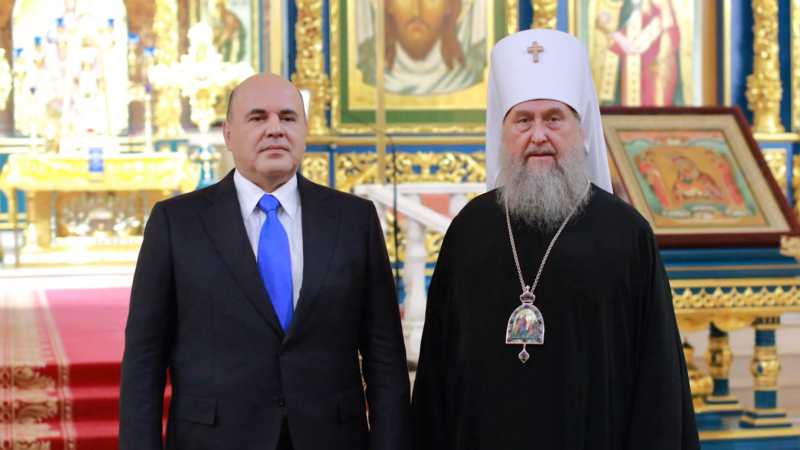 The long-expected “togetherness” and solidarity with Russia that Mishustin desperately tried to evoke in his Kazakh counterpart, were soon felt at his meeting with Akylbek Japarov, who recalled an epic quote by the Kyrgyz president:

We were together with Russia for 200 years and are ready to be with her for another 300 years.

Understandably, the Kyrgyz Cabinet chose to omit this quote in their report. Interestingly, the Kyrgyz president became known for historical references to Russia, as he also wrote an article on Kyrgyz-Russian relations with an imposing title “Allied ties” (Союзнические узы) in February 2021, on the eve of his first international trip as the president, undergoing, prior to it, a substantial self-quarantine in order to meet the Russian President Vladimir Putin in person. In an applauding, but not so prophetic manner, the article praised Russia for “providing peace along its state borders,” and ambiguously claimed that the Russian annexation of the Kyrgyz in the 19th century facilitated the emergence of the latter as a unified nation.

The Kyrgyz president also had a telephone conversation with Putin on February 26, just two days into the war, which the office of the president presented as the one over the “situation in Ukraine.” However, the content of their conversation was “revealed” by numerous Russian news outlets, including the official website of the Russian president and the state-owned RIA news agency. According to them, upon recognizing Kyiv's responsibility in wrecking the Minsk arrangements, the Kyrgyz president endorsed “decisive actions by the Russian side in protecting the civilian population of Donbass.” This “endorsement” of the Russian military aggression in Ukraine triggered an immediate response, as Ukrainian President Volodymyr Zelensky recalled its ambassador to Kyrgyzstan for Kyrgyz officials’ justification of Russia's aggression against Ukraine.

On March 9, however, while addressing the Jogorku Kenesh, the Parliament of Kyrgyzstan, President Japarov highlighted his stance on the Russo-Ukrainian war:

Of course, we are a small country. Our influence would not be enough to stop the war. Therefore, we ought to remain a neutral country.

Weirdly, the Russian translation of his speech on his official website replaced the Kyrgyz word for “war” (согуш) with “conflict,” making it more appealing to Russia, which notoriously made it illegal to call the war a “war.” However, it was perhaps the Kyrgyz Foreign Minister Ruslan Kazakbayev who went even further in appeasing Russian sentiments, since at the press conference in Moscow with his Russian counterpart Sergey Lavrov on March 5, 2022, he insensitively stated that “both Ukraine and Russia are the victims of this conflict.”

Among all Central Asian leaders, the Kazakh president Tokayev was the only one who had a telephone conversation with the Ukrainian president, along with recurrent calls with Putin. In doing so, while speaking Russian, he chose an extremely neutral lexicon, avoiding reference to war, as he did at the congress of the ruling Nur Otan party (later renamed Amanat) on March 1, 2022, quoting the Russian version of “A bad peace is better than a good war” (худой мир лучше доброй ссоры) with “quarrel” (ссора) instead of “war” (война), although he did not hesitate to mention war in his English-language tweets.

«A bad peace is better than a good war.» Without peace, there will be no development. Kazakhstan is ready to provide its good office, if needed.

However, on April 4, just as the evidence of horrific Russian atrocities in Bucha were being revealed, he published an English-language article in The National Interest, where he assures his respect for Ukraine's territorial integrity, even referring to the Russian aggression in Ukraine as “war.” One ought to recall that in his 2019 interview with Deutsche Welle, he was hesitant to call the annexation of Crimea annexation, banally uttering “whatever happened, happened.”

However, despite keeping a relatively low profile in global political debates, it was Uzbekistan, that first expressed its assurance of Ukraine's territorial integrity and unwillingness to recognize separatist entities there, as was stated on March 17 by the Uzbek Foreign Minister Abdulaziz Kamilov at the session of the upper house of the Oliy Majlis, the parliament of Uzbekistan. Interestingly, though, it was soon alleged that he might not resume his duties on health grounds following his medical leave, although his statements on Ukraine were reportedly endorsed by the president's office.