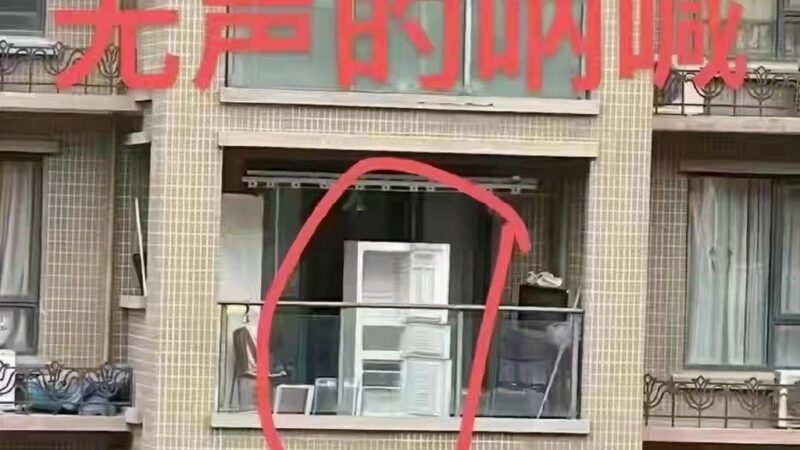 A viral image circulated on Chinese social media. An empty refrigerator was placed in the balcony as a protest against food supply shortage during lockdown.

The lockdown of 26 million people in Shanghai has been extended indefinitely until the latest Omicron outbreak is under control.

The 2-phase citywide lockdown was announced on March 27 and initially set to end on April 5. However, the number of confirmed cases has been surging and reached a recorded high of 17,077 cases at the scheduled end date and the city authorities decided to conduct another round of universal testing, hoping to suppress the outbreak under the zero-COVID policy.

Meanwhile, below the surface, the city is in chaos as many residents under lockdown are running out of food, being denied standard health care, and struggling to access basic everyday goods, according to the latest report by Human Rights Watch.

Yet, the chaos is being censored on social media and in the emptied streets, as media professor, Weixian Pan commented:

The romanticized mediation of the empty, quiet Shanghai erased the busy logistical/medical workers roaming through the city, and dismissed how messy and chaotic this moment really is. The city is now permeated with rage, exhaustion, and disappointment from the people. #lockdown https://t.co/Ab6W63wqz4

The shutdown has disrupted the city's logistical supply chain which helps Shanghai's 26 million residents meet their basic needs. Hence, as many complain that they are starving on social media, unable to go to stores and not receiving adequate rations, vegetables and food have been left to rot in the streets with no delivery mechanisms available.

In some quarantine centers for asymptomatic patients there were not enough workers to distribute food and supplies, leaving people had to fight for their own survival. Below is a video clip shared by political cartoonist Rebel Pepper showing the chaos in one of the quarantine camps in eastern Shanghai:

A quarantine spot in an abandoned school campus in Nanhui district in eastern Shanghai. No one was there to manage supplies. Delivered food was left in open space for people to grasp.

More and more conflicts broke out as residents attempted to evade the district lockdown in search of food. Rebel Pepper shared a video taken in one of the conflict zones:

In a residential district in Shanghai, riot. All I hear is desperate cries “We are starving to death!” I never anticipated that Shanghai will trigger such a crisis. I have kept track of censored videos coming from Shanghai. If you can’t take this, just don’t watch.

Thus far, the authorities claimed that there have been zero COVID-related deaths in the current wave of outbreaks in Shanghai, but the evidence seems to contradict that.

A now censored report from Caixin shows that 20 elderly people died in a caring facility in Shanghai in the current wave of outbreaks. Some workers and the elderly tested positive for COVID-19 in the facility.

A frontline doctor in Shanghai told the investigative journalism site, the Initium, that the number of non-COVID-related deaths had surpassed COVID-related deaths as hospitals had suffered from a shortage of healthcare workers who were either under quarantine or were mobilized to conduct universal COVID tests. Moreover, some hospitals have rejected patients who were in need of emergency care because they did not have a 24-hour negative PCR test result.

Shanghai is like a hell on earth now. A 40-year-old staff member from Beckman [a wholesale company] had a heart attack and died because the hospital refused to rescue them without a PCR test. Two Tsinghua University alumni died because no one cleared their throats after surgery. A 24-year-old young man died of acute pancreatitis as a result of the deferral of emergency medical care. A 2-year-old kid died during quarantine, his mother committed suicide.

Citizens have been further outraged because children have been separated from their parents in some quarantine arrangements, which violated the United Nations Convention on the Rights of the Child. Below was a viral video showing that children under quarantine were not receiving proper care:

The extreme “COVID Zero” policy in #Shanghai is more dangerous than the virus itself. 200 children are separated from their parents without their consent. There are only 10 nurses taking care of those children.#ccppropaganda#CCP_is_terrorist pic.twitter.com/FzjjO7V5Rs

Eventually, the authorities made some concessions on April 4.

Despite growing frustration, there is no indication that the draconian lockdowns will end soon, at least not until the outbreak is under control. More than 10,000 workers, including military personnel from the People's Liberation Army,  have been deployed from other provinces to Shanghai to assist with the lockdown.

Drones and robot dogs have been seen roaming in the empty city urging people to comply with the restrictions:

As seen on Weibo: Shanghai residents go to their balconies to sing & protest lack of supplies. A drone appears: “Please comply w covid restrictions. Control your soul’s desire for freedom. Do not open the window or sing.” https://t.co/0ZTc8fznaV pic.twitter.com/pAnEGOlBIh

While social media platforms have loosened their censorship on individual messages calling for help, sharp criticisms of government policy are still being censored. Here is the most popular joke circulated on Weibo in recent weeks:

The best-managed district in Shanghai is the commentary district [section]