He believes the war will be shorter with Europe's help 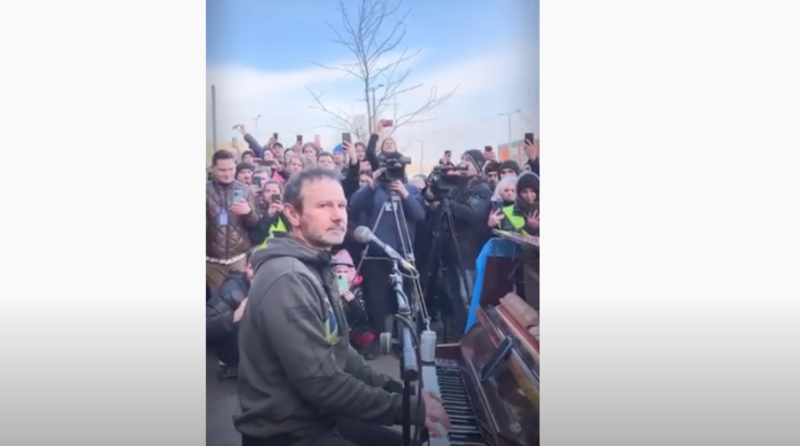 A screenshot from Binodva's  YouTube Channel showing Vakarchuk performing in front of the Lviv railway station in Ukraine.

Global Voices interviewed Svyatoslav Vakarchuk, the lead singer of the Ukrainian music band Okean Elzy to ask him about Russia's invasion, the importance of music as a spiritual force and what kind of support his country needs now.

Vakarchuk is not just one of the most popular singers of Ukraine, he is also a public figure who engages in politics, having served as a member of parliament twice, and as a soldier since the beginning of the war on February 24. The interview was conducted in English via Zoom as he was crossing several military checkpoints while travelling across Ukraine.

Global Voices asked him about the reactions of Russian music celebrities, many of whom the band Okean Elzy was familiar with, as it used to perform at festivals or concerts in Russia. With very few exceptions such as Boris Grebenshchikov, Oxxxymiron, and Zemfira, most have simply ignored the war. Vakarchuk believes that:

Sociologists and historians will explain this silence when the war is over, the same way they explained the behaviour of Germans during the Nazi Reich. [The Jewish-German philosopher] Hannah Arendt tried to explain this mass behavior within the civilized nation of Germany. But now is not the time to talk about why and how this war happened, now we have to fight for Ukraine. One day we will probably know the answer, but now I don’t care.

Regarding Russian celebrities, we appreciate those who explained their positions and said that war is bad. But their position cannot change anything now. In general, they did not speak out candidly, they mostly kept it vague. Posting “no war” slogans on social media is not enough for us: It is too late. They could have done it in 2000 when Putin was bombing Chechnya, they could have done it and demonstrated in the streets in 2008 when Russia invaded Georgia, and in 2014 when Russia annexed Crimea. All that silence led to the situation we have now. But I am not accusing the Russian intelligentsia, those who do not support Putin, of being responsible for the massacres in Ukraine.

Though Vakarchuk performs with an entire band in times of peace, he has recently embarked on a series of solo impromptu performances in unusual places, where he sings and sometimes plays the guitar or piano. He says:

These are indeed not concerts, but impromptu performances for different audiences. Sometimes I just speak for half an hour and don’t sing a single song, or sing one to three songs. Kharkiv's subway, the frontline, railway stations are no places designed for concerts. But people are very enthusiastic, and performing like this boosts my desire to do more. It allows me to do three things: to show I share their responsibility and fight next to them, without being afraid; to provide emotional and spiritual support, and finally to deliver supplies.

He also explains his current relation to music:

Many people want me to write songs, and I see other musicians doing it. But I never write for a purpose, I only write when my heart starts talking. and right now, my heart is busy with those who need help. But I do know for sure that art is a sublimation of stress and emotions, and I feel so much of that now that I am expecting to write something soon.

Asked about the heroic resistance of the entire Ukrainian nation, Vakarchuk offers this explanation:

Ukrainians acted like that for centuries, now it is easier to let others know because we have the internet, but things are not easier on the battlefield of course. Ukraine did not change, it is the perception of that world that changed.

Vakarchuk is also well-read. He has a PhD in theoretical physics and is very familiar with European history, which is why he also makes references to Czech culture, which he sees as an inspiration — whether it is Milan Kundera's novel talking about the 1968 Soviet invasion of Czechoslovakia or the spirit of resistance of Václav Havel as embodied in his Charter 77.

When asked about the best way to help Ukraine, Vakarchuk has a very clear vision:

There are three things we need from the free world: Number one, give us anti-missile defense system, specially the Soviet model S-300, which former Warsaw Pact countries all have. The same with Soviet-type planes. Number two: Give us more sanctions. A complete ban on oil and gas from Russia, as well as blockade of Russian ships in all ports of the free world. And number three: Ban Russian from the international SWIFT banking system.This will make this war very short.

It will not come easy for the west but this sacrifice is nothing compared to what Ukrainians face now: Losing people, women, children, cities. We are fighting for the whole word so we expect you to sacrifice a little.

For more on Okean Elzy's music, check Music in times of war: Song as a form of Ukrainian resistance and check out Global Voice's Spotify playlist here.