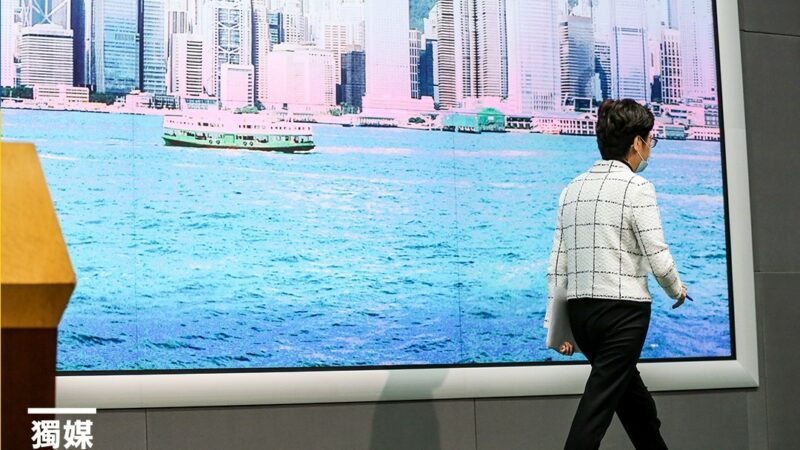 Carrie Lam, the Chief Executive of Hong Kong, announced on April 4 that she will not run for a second term in the upcoming race for the city’s top position.

Currently, her most likely successor is former police head John Lee, who was appointed by Beijing as the city’s Chief Secretary last June after Lam expressed her wish to step down in May 2021. Several local media outlets quoted sources and reported that Lee would resign and race for the top in the small circle election on May 8, 2022.

Sources also said ex-Chief Executive Leung Chun-Ying will be appointed as the convenor of the 1,500-member Election Committee.

The Chief Executive election has been deferred for two months due to the outbreak of Omicron in Hong Kong. The nomination period will run from April 3–16.

While Carrie Lam is the least popular leader since the handover of Hong Kong to China in 1997, many are astounded by her possible replacement. Twitter user Mars Alien imagines the coming of the worse:

Both Lee and Tang were responsible for the violent crackdowns during the 2019 anti-China extradition protests and both have played key roles in the implementation of the National Security Law (NSL) upon its enactment on June 30, 2020.

As pointed out by China's state-funded media outlet Global Times, the appointment of the two former police heads indicated that the implementation of NSL was the city’s top priority.  Yet the choice has transformed the nature of the Hong Kong government – conventionally, the Chief Secretary is headed by administrative officials who have rich experience working in different government branches. Carrie Lam, for example, is a former administrative officer and has worked in the government for 42 years.

If Beijing picks John Lee as the Chief Executive, the transformation of Hong Kong into a police state would be completed — Hung Ho-Fung, a sociology professor at Johns Hopkins University, mocked the move:

More and more likely they will put a police officer as the next HK Chief Executive. A genius rebuke to the groundless accusation of the HK government as a police state. yeah!

Hong Kong leader Carrie Lam won't seek second term – but the people of HK don’t get to vote as the CCP will impose another apparatchik- someone like John Lee, ready to further entrench her bitter legacy – the destruction of Hong Kong’s freedoms https://t.co/cKig5ES6Wk

The career path for police officers will be more bright than ever in Hong Kong — political cartoonist Wong Sir commented on the news with his drawing:

Pro-Beijing outlets are increasing their messaging that John Lee (李家超), former secretary of security and police, will seriously contend for becoming the next chief executive of HK.

“You can become the next CE!” pic.twitter.com/L8en9a0nP5

Carrie Lam said her work is done and it was time for her to go home when she explained her decision in the press conference. However, some believe that Lam's decision came from Beijing as she made the announcement after a meeting with mainland officials in Shenzhen.

Since the outbreak of Omicron in Hong Kong, the pro-Beijing politicians have spoken out against Lam for her failure to implement the zero-COVID policy.

As for the pro-democracy sector, Carrie Lam's legacy includes the introduction of the 2019 extradition bill, her role in the police crackdown on anti-China extradition protests, the implementation of the National Security Law, the mass arrest of activists, the shutting down of independent media outlets, and the rewriting of the Hong Kong election system. BBC China Correspondent, Stephen McDonell summed up her time in a Twitter thread.

And Reinhard Bütikofer, a member of the European Parliament, puts it in a nutshell:

Carrie Lam leaves a legacy of utter and despicable obediency to CCP orders in destroying Hong Kong freedoms. But during her tenure a seed of democratic activism was also sown courageously opposing the oppression that will bear fruit in the future. #StandWithHongKong https://t.co/pN9XG9nY60