As international negotiations end in Jamaica, the threat of deep-sea mining hangs over the world's oceans

'The environment cannot be put to one side' 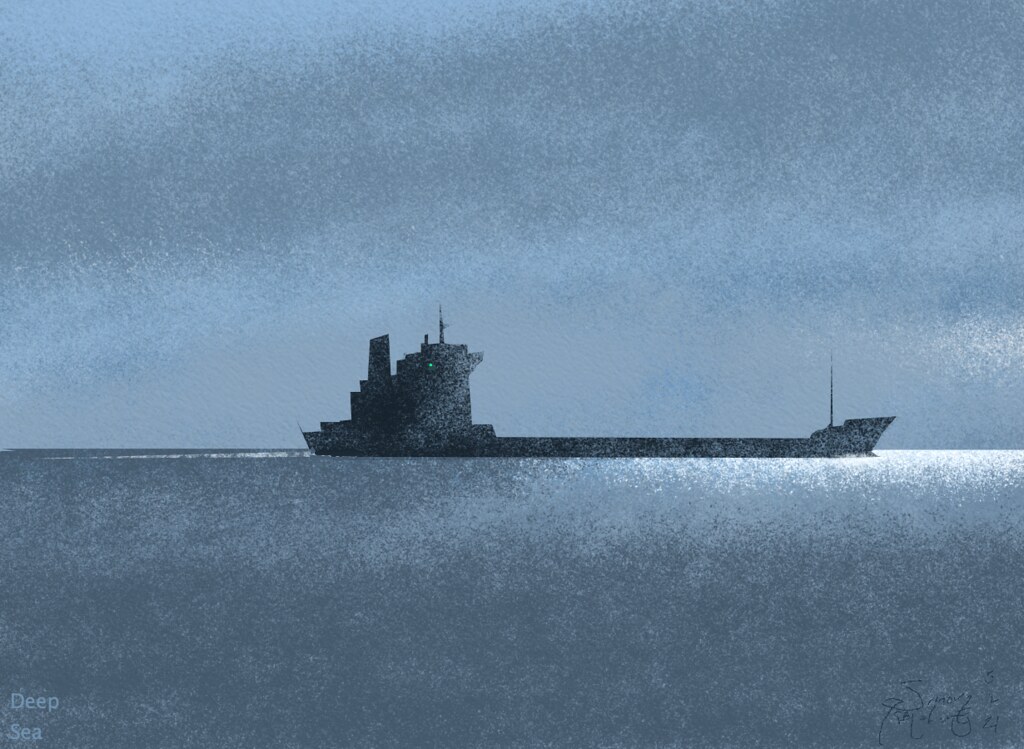 From mid-March to April 1, representatives of Greenpeace International assembled in Kingston, Jamaica to express their concerns about the possibility and potential ill-effects of deep-seabed mining. Along with the Deep Sea Conservation Coalition, which calls the looming industry “the most recklessly destructive thing we could do to our planet,” Greenpeace — one of 32 non-governmental organisations observing the 27th Session of the International Seabed Authority (ISA) — is calling for a moratorium on such activities.

Additional meetings are carded for later this year, with the goal of putting in place a mining code to allow deep-seabed mining to start in June 2023. Assuming this code is passed and instituted by this date, all of the deep sea, comprising nearly half of the planet, will be open to mining.

Environmental defenders find this a disconcerting reality to contemplate. Although such NGOs cannot participate in decision-making activities at the ISA Council, they can — and did — make presentations at the sessions, with Greenpeace noting it “remains extremely concerned” about the way in which things are progressing within the ISA. Headquartered in Jamaica's capital, the ISA was established in 1994 under the United Nations Convention on the Law of the Sea, which has a mandate “to ensure the effective protection of the marine environment from harmful effects that may arise from deep-seabed related activities.” 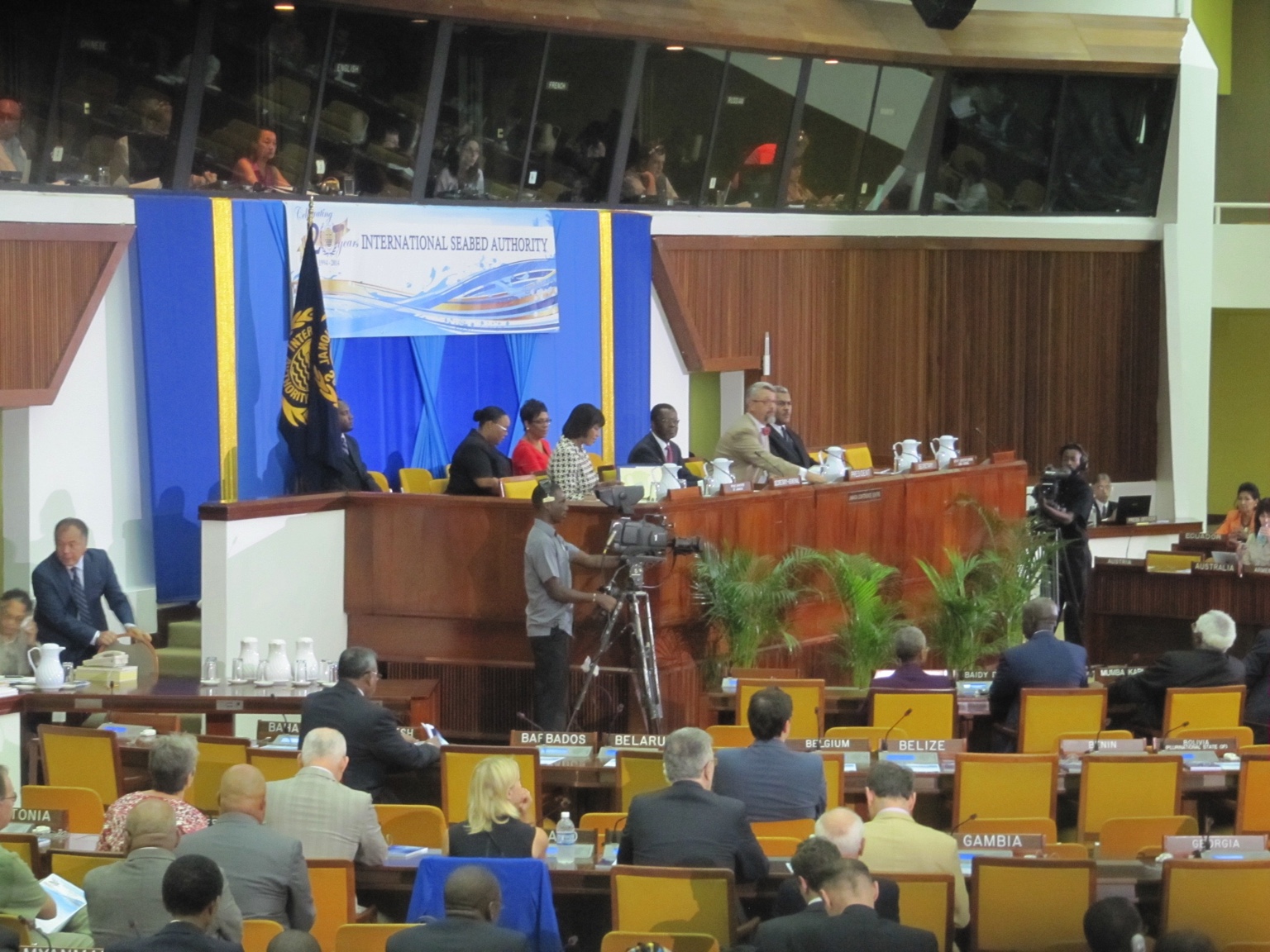 A special session for the International Seabed Authority's (ISA) 20th Anniversary on July 20, 2014. Photo by Emma Lewis, used with permission.

Its 167 nation-strong membership, plus the European Union, convenes at the Jamaica Conference Centre once a year to discuss everything from environmental protection to deep-seabed mining. The challenge, however, is that while the technology exists to mine these economically valuable seabed minerals, the rules governing those efforts — not to mention the equitable sharing of any profits — are vague at best. On March 21, Greenpeace said:

With the triggering of the two-year rule by Nauru last June, there appears to be a heightened pace within the ISA to rush into seabed mining in spite of its legal obligations, first and foremost, to ensure the protection of the marine environment, including the seabed, which is the common heritage of humankind.

According to Greenpeace activist Arlo Hemphill, who spoke with Petchary's Blog while in Jamaica, the question of seabed mining, its ethics, laws of governance and potential benefits and threats, has been hastened thanks to Nauru, an eight square-mile Pacific island that, for financial reasons, is partnering with a Canadian firm, The Metals Company, which currently has the greatest capability to start mining. Last summer Nauru informed the ISA that it wanted to start deep-sea mining, triggering an obscure “two-year rule” contained in the UN Convention on the Law of the Sea.

Hemphill also noted that The Metals Company holds prospecting licenses for the Pacific islands of Tonga and Kiribati, calling it “very much a predatory relationship […] taking advantage of small islands and countries.” He added, “The ISA has never said ‘No’ [to a prospecting license], not even once.”

Calling the notion of proceeding with seabed mining “out of step with the rest of the world,” Greenpeace urged the Council to pay heed to the hundreds of scientists who signed a statement warning of the loss of biodiversity, as well as others, like the IUCN World Conservation Congress and the European Parliament, which have called for a moratorium on deep-sea mining.

Scientists have already confirmed that “ecosystems on the deep seabed cannot recover from disruption on human time scales.” As Greenpeace emphasised on March 22:

Destruction of life on the deep seabed — of species we often don’t even know yet — means losing ecosystems and most probably entire forms of life we will never see again, and that needs to be part of the discussion here.

The Deep Sea Conservation Coalition reminded the ISA of its mandate “to effectively protect the marine environment from harmful effects arising from mining activities.” Ironically, it added:

The environment cannot be put to one side.

It went on to itemise the “irreversible damage” that would be done, “damage to the seabed, damage from plumes, including to coastal communities and damage to fisheries,” and lauded at least one Caribbean nation, Trinidad and Tobago, which has stood with other member states and Greenpeace in recognising “the importance of externalities and the environment,” explaining:

The payment mechanism cannot be finalised until the externalities including damage to natural capital and ecosystem services have been quantified and it has been demonstrated that deep-sea mining would not result in significant damage to biodiversity and ecosystem functioning.

The ISA has since been fielding significant criticism over its non-renewal of Earth Negotiations Bulletin‘s (ENB) contract. ENB is an independent body that has been reporting on the negotiations in an effort to bring transparency to the process. As a result of the dismissal, the ISA has been accused of autocratically charting the future of the deep-seabed mining industry. The media release it issued upon the conclusion of the Council only served to heighten this perception, as the ISA's focus was on “the draft Regulations on exploitation of mineral resources in the Area.”

Further complicating the issue is the narrative that any move away from fossil fuels and towards renewable energy requires the types of minerals available on the seabed. Greenpeace's position, which is shared by many other environmental NGOs, scientists and even manufacturers, is that you don't have to go to the seabed to source these materials. Research in this area continues; it just needs more time.

“The problem,” explained Hemphill, “is the technology is far ahead of the science, and we don’t understand all the science of the deep sea yet.” Likening deep-seabed mining to the destruction of the marine ecosystem, like a “giant lawn mower or vacuum cleaner” stirring up the sea bed, he added that such activity “would create huge plumes of debris that would smother coral reefs and have a major impact on everything that lives in the sea.”

Meanwhile, Jamaican-born Tanya Brooks, Senior Strategic Communications Specialist with Greenpeace USA, pointed out that Small Island Developing States (SIDS) like the Caribbean must be acutely aware and protective of our ocean, which is a mainstay of everything from food security and community life to tourism. Brooks and Greenpeace fully support the High Ambition Coalition’s global “30 By 30” initiative, which aims to secure a global deal to protect at least 30 percent of the world's land and ocean by 2030.

In its final statement on the ISA sessions, Greenpeace noted that delegates have “consistently highlighted the fundamental flaws of the ISA, including a lack of transparency within the Authority’s Legal and Technical Commission,” with which the approval of commercial mining licenses lies:

If the LTC recommends that an application for mining be approved, the Council (the decision-making arm of the ISA) would need to overturn the recommendation with a ⅔ majority, plus a majority in 4 ‘Chambers’. This clearly demonstrates the skew of the authority towards mining, rather than ocean protection.

International commitments on nature and climate need to translate into urgent action on the floor of the ISA council. Anything less than a moratorium on the industry would be a failure.

Just as pressing for small island nations like the Caribbean, is that they will be on the frontline of the environmental fallout.