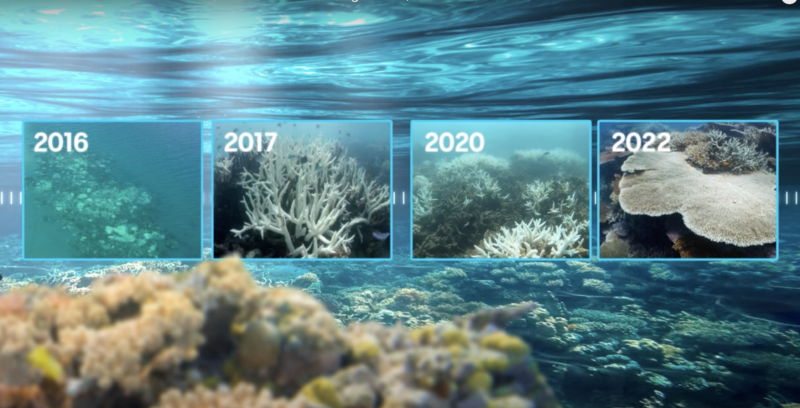 The busy news cycle seems to have crowded out coverage of the fourth mass coral bleaching in six years at Australia’s Great Barrier Reef. The Great Barrier Reef Marine Park Authority confirmed this in its Reef Health report on March 25, 2022:

It did not receive the attention such an event usually generates in mainstream or social media, either locally or internationally. The war in Ukraine, floods in eastern Australia, debates about Australia's Federal budget before a national election in May, the unexpected death of much-admired cricketer Shane Warne and other celebrity news took centre stage down under.

This week Will Smith gets more media coverage, for bad behaviour, than the ongoing decline of the world’s coral reefs.

How screwed up is that? https://t.co/aLuO2WpeAH

“We need to learn from these bleaching events,” says WCS's @emilysdarling. “We need to change business as usual. We need to take action on #climatechange.” pic.twitter.com/iBFmcYFesR

It included this comment from Emily Darling of the Wildlife Conservation Society:

What jumps out at me is the frequency of these events. There's just been no recovery window for the corals.

Not everyone on social media is convinced:

If I remember right the great barrier reef wasn't going to be around 20yrs ago because of climate change. https://t.co/VMpyLrphGF

On the other side of the continent, Federal parliamentarian Josh Wilson is concerned that similar damage to the Ningaloo Reef in his State of Western Australia needs more publicity:

It’s right that bleaching of the Great Barrier Reef is a matter of enormous national and international concern, but marine heatwaves off the WA coast are also of grave ecological and biodiversity consequence. https://t.co/UfIlbaop0N

The Australian federal budget was brought down a week after the bleaching announcement. The speech by Treasurer, Josh Frydenberg, mentioned climate change just once. Many condemned the lack of extra funding to combat climate change. The Climate Council lamented this failure of funding:

THE 2022 Federal Budget has failed to deliver any meaningful commitments to address escalating climate change in Australia.

Nicki Hutley, Climate Councillor, leading economist and former Partner at Deloitte Access Economics, who was in today’s Budget lockup, has calculated that just 0.3% of total expenditure for 2021-2024 has been committed to climate change initiatives, falling even lower, to just 0.2% in 2024-2026.

The pro-renewables Institute for Energy Economics and Financial Analysis (IEEFA) had a bleak take on the numbers:

They argued that: “Despite the Federal Government saying it’s committing funding to energy and emissions reduction measures in the 2022-23 Budget, the spending on climate is reducing over the next four years, and spending on LNG, gas, carbon capture and storage, and ‘clean’ but not necessarily ‘green’ hydrogen has increased.”

In Australia's 2022-23 Budget, spending on climate is reducing over the next four years, and spending on LNG, gas, carbon capture and storage, and ‘clean’ but not necessarily ‘green’ hydrogen has increased.https://t.co/b1cftmzKMr #auspol #ClimateCrisis #energy

At “The Conversation”, scientists from north Queensland's James Cook University highlighted another unusual aspect of the bleaching:

This is the first time the reef has bleached under the cooling conditions of the natural La Niña weather pattern, which shows just how strong the long-term warming trend of climate change is.

Coincidentally, the United Nations World Heritage Centre's monitoring mission was visiting Australia to decide whether the reef should be listed as a World Heritage site in danger:

UNESCO’s World Heritage Centre and IUCN (International Union for Conservation of Nature) will undertake a mission to Australia’s Great Barrier Reef from 21 to 30 March 2022 to assess its state of conservation and a long-term sustainability plan for its protection.

In a different part of eastern Australia, Sydney’s world-renowned Bondi beach was experiencing another climate-related event:

Meanwhile, the latest Intergovernmental Panel on Climate Change (IPCC) report has warned that “limiting global warming to 1.5°C is beyond reach”.

Retired soccer star and human rights activist, Craig Foster, was just one of many to underline the urgency:

‘The world can still hope to stave off the worst ravages of climate breakdown but only through a “now or never” dash to a low-carbon economy and society..a final warning for governments on the climate.’

And Australia is going backwards.