Undertones: Populist discourses against the ‘elite’ and the ‘poor’ in Turkey

Turkish doctors and refugees are under fire 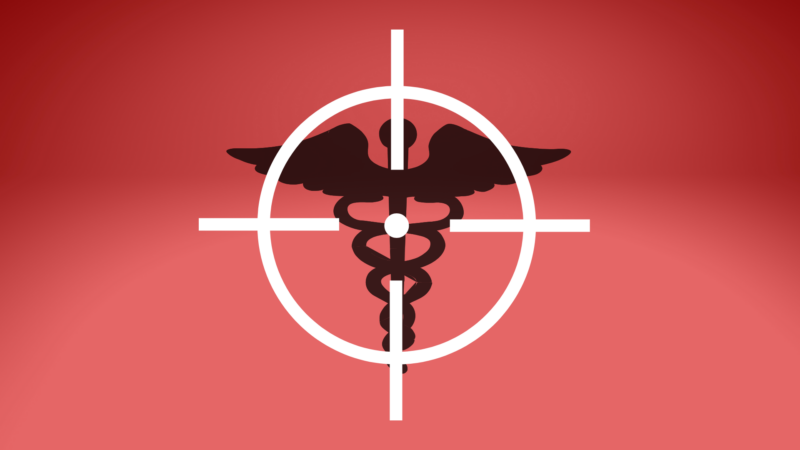 Turkish doctors and Syrian refugees share an unlikely commonality — they are among the groups in Turkey that are most targeted by far-right and populist narratives. With the country’s ongoing downward economic spiral — worsened by nearby Russia’s war against Ukraine — anti-immigrant and anti-elite narratives are gaining ground at an alarming rate.

Some mainstream media and far-right politicians, especially those in the opposition, have used Turkey’s skyrocketing inflation to question the tax money being spent to support Syrian refugees. Turkish doctors, too, have been targeted — but by the ruling party itself.

President Erdoğan’s conservative administration has openly labeled Turkey’s doctors’ union as “terrorists”, a term that it usually reserves for the opposition. The fact that this union has been consistently vocal about human rights could be a clue as to why it has received such scrutiny from the state.

Why talk about it now?

While discrimination against doctors and immigrants is not new, the narratives about them are increasingly aggressive and could result in physical violence. In January, a Syrian refugee was killed in Turkey. Meanwhile, the Turkish Medical Association (TTB in Turkish) denounced tens of thousands of cases of aggression against healthcare workers.

1. “The elites lost their power with the AKP government”

President Recep Erdoğan’s Justice and Development party (AKP in Turkish) and its supporters have pushed the idea that Turkey’s educated elite lost their power because of the AKP.

This narrative is part of a much older one that emerged during the fall of the Ottoman Empire and the creation of the Turkish Republic in 1923. That narrative pits Westernized, urban elites (a demographic minority) against conservatives who were mostly in the periphery of the country’s civic landscape.

But the definition of “elite” has been kept intentionally ambiguous. Pro-government media and government politicians use this ambiguity to label any of their political opponents as elites. This all-encompassing term has been used to target proponents of secularism, the armed forces, teachers and judges. Lately, doctors and healthcare workers have also become a focal point.

The rhetoric of this narrative extends beyond the rich and the poor. It refers to people who, in addition to their perceived economic privilege, allegedly hold traditionally strong political positions in society, and who exert influence from urban centers.

According to the Turkish Medical Association, about 88% of the country’s doctors are part of that union. They seek better hours, wages, and safety. The TTB claims that 13 doctors have been killed because of their work and 84 percent of all doctors have faced violence at the workplace. The pay of specialist doctors is barely above the poverty line. Thousands of doctors have been leaving the country for the European Union.

The TTB went on strike between March 14 and 16, during which time all non-urgent healthcare services stopped. In this video shared by Yeni Şafak, a media outlet close to Erdogan, a hospital’s head physician is seen trying to force a doctor to come back to work. The head physician makes false claims, saying, for example, that the emergency care unit was closed due to the strike, when in fact, it was not. The video gathered more than 1.6 million views, with most commentators agreeing with the head physician. Yeni Şafak, which did not provide context for this video, often pushes the narrative that doctors are an elitist group.

See these two more items reflecting this narrative, from sources: TR_49 and TR_52

2. “The opposition are terrorists”

Allegations of terrorism are common in Erdoğan's Turkey. For example, anyone disagreeing with the AKP’s line about the treatment of Kurds is considered treasonous and terrorist. In the same vein, having links with specific parties, such as the left-leaning People’s Democratic Party (HDP), is enough to be called a terrorist.

This narrative is used to delegitimize and dehumanize opposition against Erdoğan. Attacks against the political leader Kılıçdaroğlu in 2019 happened after similar allegations by Erdoğan.

TTB is often fiercely critical of Erdogan’s government, having openly supported the wave of civil unrest known as the Gezi Park protests back in 2013. In Turkey, medical faculties, and by extension, the medical profession, are traditionally associated with left-wing ideology and groups. In 2020, TTB’s congress elected a leadership that is close to the opposition and to the pro-minority party, the HDP.

Pro-government media outlet Yeni Şafak tweeted a story about Mustafa Destici, chairman of a small ultranationalist and Islamist party allied to the AKP. The outlet quoted him saying that the doctors’ union shouldn't be allowed to use the word “Turkish” because, he alleges, they support terrorist organizations. The tweet received more than 3,000 interactions, with most commentators approving of Destici’s sentiment. Some expressed their desire for TTB to cease to exist. 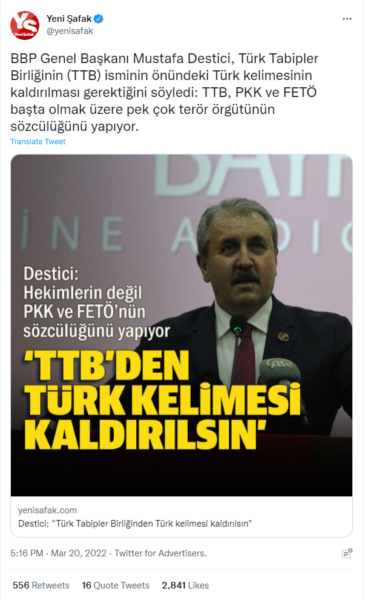 Negative narratives about Syrian refugees are ubiquitous in Turkey. According to recent polls, the vast majority of Turks want “Syrian refugees to return to Syria”.

This narrative, which espouses the idea that the large number of Syrian refugees will eventually replace Turks, exists across the political spectrum and in media houses. This belief is particularly prevalent and explicit in far-right groups. Erdoğan’s party and pro-government media, on their part, have used the “Islamic brotherhood” narrative to welcome Muslim refugees from Syria.

Far-right politicians have gone as far as arguing that Erdoğan’s government is promoting the influx of Syrians so as to Islamize the country. This has fed conspiracy theories about Turkey’s “Arabization” among secular nationalists.

According to the European Commission, Turkey hosts the largest refugee population in the world. With a population of more than 80 million, the country currently hosts 3.6 million registered Syrian refugees who are being increasingly held responsible for the country’s economic crisis. Today, immigrants are constantly targeted on social media.

Using an alarmist tone, theologian and writer Cemil Kılıç tweeted that Syrian, Afghan and Africanr refugees (among others) must be sent back or else they will replace the Turks in Anatolia. He explicitly uses a far-right conspiracy theory of demographic replacement — similar to the French Great Replacement fascist theory, although it is not called as such in Turkey. Kılıç’s tweet received 20,000 interactions, with most commentators agreeing with his message, while a few criticized it. 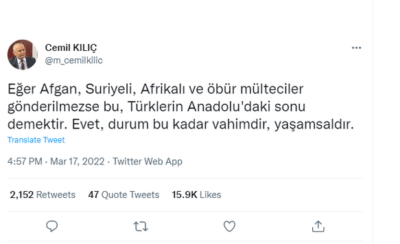