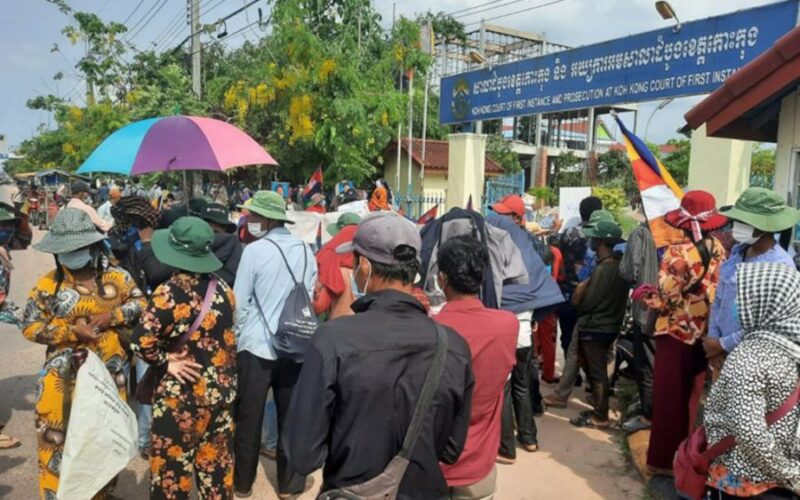 This article by Khut Sokun was originally published on VOD News, an independent news site in Cambodia, and is republished on Global Voices as part of a content-sharing agreement.

Hundreds of people across three Cambodian provinces and the capital Phnom Penh gathered for protests in March seeking official intervention for land disputes with authorities and companies, some which have gone on for decades.

The protests in Koh Kong, Preah Vihear, and Mondulkiri provinces touched on various aspects of land tenure, a key issue in modern Cambodia.

The protesters demanded solutions to long-running land disputes, denounced illegal clearing of community land, resisted the summons of their representatives, and sought formal land titles for their land.

About 400 villagers from Sre Ambel, Botum Sakor, and Thma Baing districts in Koh Kong gathered on March 14 in front of the provincial court to support three of their representatives who were brought in for questioning. The protesters demanded the court drop its defamation and incitement charges against them.

Chum Srey Nov, a villager included in the case and a representative from Botum Sakor, said she was innocent of the wrongdoing alleged against her. Srey Nov said she was protesting what she describes as land encroachment committed by politically connected tycoon Ly Yong Phat, who she said violated people’s land in 2006 without giving compensation.

What we have done so far is only wanting to have a solution. We have done nothing wrong as charged in the complaint.

Run Pheap, another villager who was named in the court complaint, said the charge was a kind of threat to discourage people from protesting. Pheap also denied any wrongdoing and said the court action is unjust for people who lost their land.

“The authorities should find a solution for us soon,” she said.

The provincial court has summoned 18 total representatives for questioning in March under the same charge of “causing unrest and disturbing public order.” 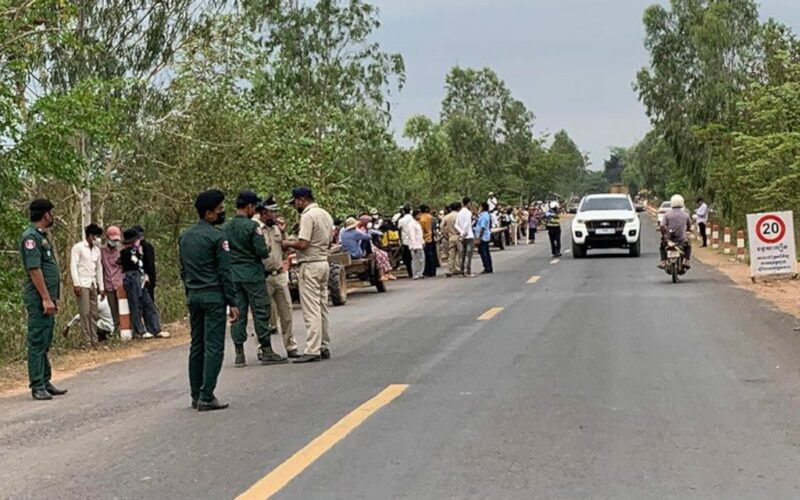 Land disputants are blocked by authorities in Preah Vihear province on March 15, 2022. Photo supplied to VOD

On March 15, about 200 people from seven communities locked in a dispute with Hengfu Group Sugar Industry gathered to petition the Preah Vihear provincial hall to seek help from the provincial governor in their decade-long dispute. However, they were barred from traveling and stopped on the way to the provincial hall by Tbeng Meanchey district authorities. Soeun Tha, the head of one of the communities, said:

It seems so unjust for us because we are the victims who lost the land after the company encroached. We came here to ask the provincial governor to find a solution but instead, authorities came to block us. I feel disappointed.

Lor Chan, an Adhoc coordinator in Preah Vihear province, said preventing people from submitting a petition is a restriction of their rights and a violation of Cambodian law. 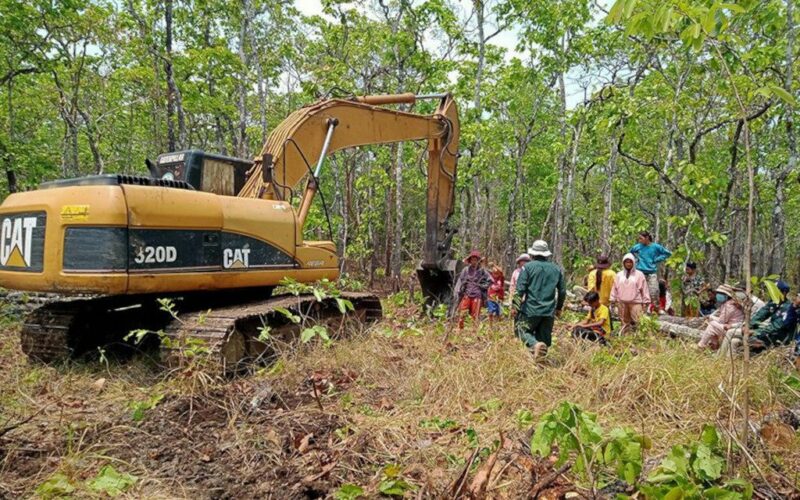 Villagers block the clearing of their community forest in Mondulkiri province’s Sen Monorom city on March 15, 2022. Photo supplied to VOD

On March 16, about 50 Bunong Indigenous villagers protested against a private company clearing and marking boundaries on several hectares on their communal forestry land in Lao Ka village of Sen Monorom city.

Pleok Phirom, a community representative, told VOD that an unidentified company had cleared more than 60 hectares of their 300-hectare ancestral land. When villagers went to stop them, Phirom said, there were public officials overseeing the action and protecting the company’s machines.

After villagers protested strongly, she continued, the company suspended the clearance. But it has not removed the machinery yet, and Phirom said longer-running encroachments have cleared thousands of resin trees used by local Bunong people since 2012.

“Nowadays, we are living depending on that forest, such as by getting honey and resin,” Phirom said, adding that preserving the forest was also a positive step toward fighting climate change.

We have protected this forest for years, but this year the company continues to clear it. So we are not satisfied. Everyone struggles and sacrifices for this forest. If they still continue to cut the trees, I am willing to sacrifice my life to protect the trees.

However, local officials deny that the company is encroaching on any land it does not have legal rights to use.

Pov Sophat, Sokhadom commune chief, said he forgot the name of the company but that it had made a boundary for the land after obtaining legal rights to it from the government. He also said the land the company is clearing is located in Pech Chreada district, not in Sen Monorom, and beyond the powers of his position to solve.

“I don’t know how to solve it because it is a land concession. So it is also difficult because they have proper legal [permission],” he said.

Kroeung Tola, a consultant for the Indigenous Community Network in Mondulkiri province, said the same company is clearing tall trees in an area several kilometers from its plantation.

He said the company and public officials colluded with each to grab state forest land in several cases.

“This activity affects the forestry and has destroyed several resin trees owned by people [in] the Phnom Prich Wildlife sanctuary.” 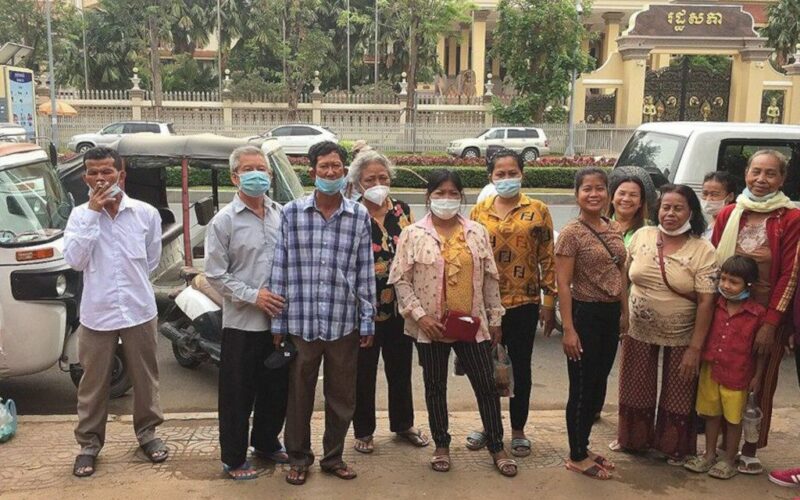 In the national capital on March 17, about 20 people who claimed to represent 200 families in the Svay Pak commune of Russei Keo district gathered to seek intervention from the ruling CPP and National Assembly in order to speed up the formalization of their land ownership.

Villager Long Poch told VOD that people were asking for help for their land because local authorities claimed they were illegally living on the state land. Poch said she had been living in the location for more than 30 years.

She added that in 2007, villagers submitted requests to Phnom Penh City Hall and other institutions for land titles. So far, they have been given no solutions, even while recently built surrounding apartments have been issued proper ownership.

“The borey company that came to develop in that area bought some land from our people,” Poch said. “But the authorities interfered and asked [the company] to delay the purchase from our people and change the deal to be an exchange for plots of land, saying people are living illegally on the state land.”

Another villager, Siv Lyna, who said she owned a 5-by-25-meter plot of land, said her family has lived in the disputed area since 1988.