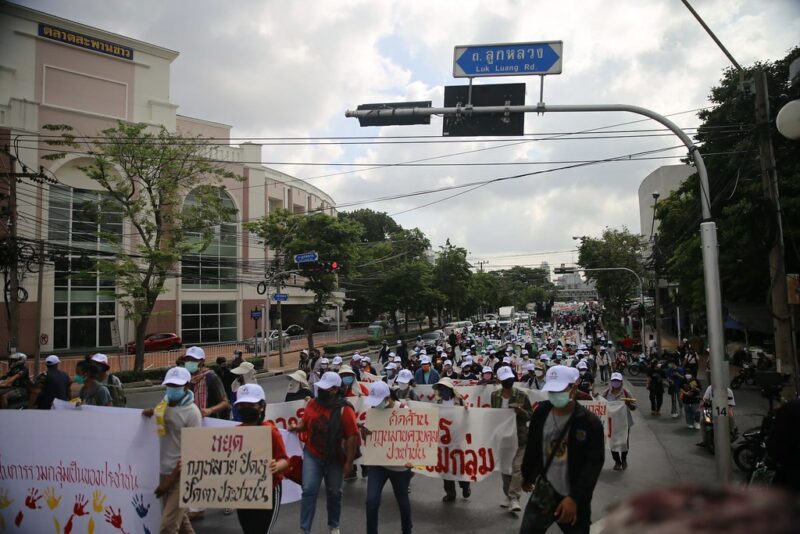 Protesters marching to the Ministry of Social Development and Human Security. Photo by Prachatai

Hundreds of protesters gathered in front of Managkhasila House in the capital, Bangkok, at around 9:00 a.m. before marching to the MSDHS to demand that the Cabinet withdraw the bill.

First proposed in July 2021, the Draft Act on the Operation of Non-Profit Organisations will, if passed, give state officials the authority to oversee, and possibly stifle, a wide range of civic organisations. The bill defines NPOs as groups “that organise, in one form or another, to collectively pursue activities in society without seeking financial gain, exclusive of groups that stage ad-hoc activities of benefit to group members or political parties.”

It would require NPOs to register with the government and to comply with all Ministry of the Interior regulations. Once the law is in effect, existing organisations will have 30 days to register. Those operating unregistered organisations face the punishment of up to five years in prison or a fine of up to THB 200,000 (USD 5,950), or both.

The bill prohibits organisations from engaging in activities that threaten national security, economic stability, foreign relations, public order, public safety and the rights and liberties of others.

It also attempts to control NPO funding, prohibiting groups from using foreign funding to pursue activities deemed inappropriate by the Ministry of the Interior. It also gives state agents the authority to search NPO offices and make copies of their online communications.

NPOs receiving overseas funding will need to provide authorities with bank records showing where funds are held and what purpose they serve.

The draft that the public hearing is concluding in 24 March requires wide ranges NPOs to register themselves with the state, declaring its purposes, transaction and donors. #whatshappeninginthailand pic.twitter.com/YVzECMaeeO

NPOs are already subject to a number of existing laws, including the Public Assembly Act and the Emergency Decree. Before the march, Nutchanat Thaengthong of the Four Regions Slum Network read a statement saying that they opposed the bill and saw it as an unnecessary attempt to further restrict freedom of expression and association.

The statement noted that the bill’s excessive and vaguely-worded stipulations would interfere with the work of NPOs and other civic groups, giving state authorities the power to severely punish members and suspend organisation operation on the grounds of national security, peace and order, and good morals.

At least 800 people were reported to have joined the march, some carrying banners with messages such as “No law to control people’s associations,” “Stop the bill to control associations,” and “Associations are a freedom the state can’t control.”

When the march reached the MSDHS, Chiranuch Premchaiporn of the Constitutional Advocacy Alliance (CALL) said in a speech that the NPO bill would destroy freedom of expression. She proposed that it be renamed the restriction of people’s organizations act, to reflect its true purpose.

She also said that over the past eight years, the government headed by former Army General Prayut Chan-o-cha had been working to destroy freedom of expression and create conditions that make it difficult for people to organize, such as requiring people to notify the authorities before holding gatherings, a constitutional right, and state prosecution of protesters using the royal defamation law, the sedition law, the Emergency Decree, the Public Assembly Act, and other laws.

According to Chiranuch, the NPO bill is the latest effort to control public organizations and civic freedoms, another tool to restrict the freedom of individuals, no matter what they do nor which side they are on. Although the MSDHS was responsible for organizing a public hearing on the bill, she said it did nothing more than set up an online platform, making it necessary for people to march on the Ministry to express their opposition.

What type of democratic country uses a law like this? For the past 8 years, the government has tried to destroy democracy through the unjust use of law and judicial process. The law is being used to silence us and stop us from gathering together. But we still come together in protest and are prepared for whatever charges that follow.

This [latest bill] is another tool that the government will use to stop the people from creating things themselves. It will further constrain the will of the people. It doesn’t matter which side you’re on, which kind of public interest work you do, all of us can get hurt by this bill.

09.30 Civil society network comprising of 800 people walked a short march to the Ministry of Social Development and Human Security, an expression of their rejection against the Draft Act on the Operation of Not-for-Profit Organizations. (NPO Bill) #whatshappeninginthailand pic.twitter.com/BbbrvwhnyJ

Demonstrators remained at the ministry until the evening. In addition to listening to the speeches of activists, they staged a public hearing and invited NPO members and protest participants to give their opinion of the bill. They also submitted a petition to Social Development and Human Security Minister Juti Krairiksh calling for the Prime Minister and the Cabinet to stop drafting further legislative constraints on NPOs and freedom of expression.

They tried to hang a large banner carrying the message “No NPO bill. It’s bad for all of us” on a nearby ministry building but were stopped by police:

Protesters tried to hang a large banner saying “No NPO bill. It's bad for all of us” onto a building, but were stopped by police officers because there is a portrait of the King displayed on the building.#ไม่เอาพรบควบคุมภาคประชาสังคม #ม็อบ24มีนา65 pic.twitter.com/aZBoO0Q7Y0

At the close of the protest, a representative from the People’s Movement Against Draft Laws that Undermine Freedom of Association Network, the event organiser, read a statement noting that freedom of association is guaranteed by the constitution and international law. It also stated that activities done in the public interest range from monarchy reform protests and constitutional amendment campaigns to protests against development projects and demonstrations against unjust laws — activities the authorities want to regulate, undermining freedom of association out of an unwarranted concern that they pose a threat to national security and public morals. Here's an excerpt of the statement:

The Prayut government has been tirelessly working to undermine the power of the people. This includes the promotion of this draft law. It will allow the government to determine which organisations and movements are “good” and which are “bad”.

At no previous point in our history has the state harboured such fear of, and hostility toward, the people. Their fears and hatred are based on twisted imaginings, not facts. In reality, ultimate power belongs to the people. People from all walks of life are the ones who create wealth and develop the country on the state’s behalf.

The network called on civil society groups to continue working to bring about social change. It also asked that they mobilize opposition to the NPO bill and continue to protest against it until the cabinet withdraws the proposal.