In São Paulo, Brazil, a new church opens every week 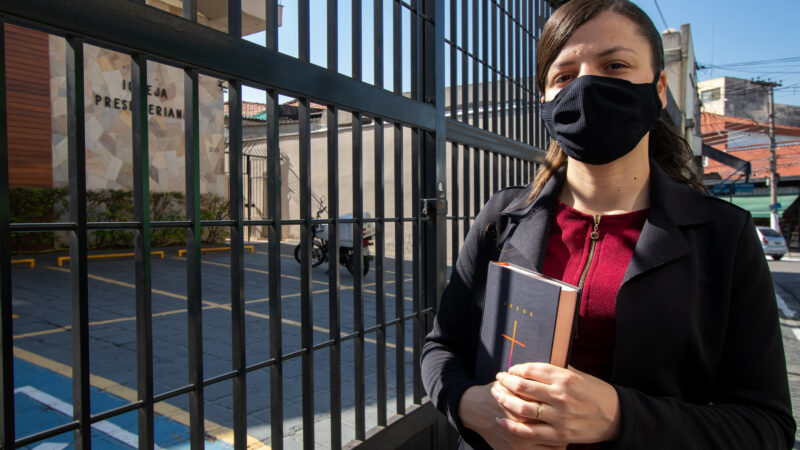 Located between a house and a beauty salon, the church Assembleia de Deus Ministério Missão, a Pentecostal church, has a small entrance 2.5 metres wide to welcome worshippers. It was opened about four years ago, when followers decided it was important to have another venue in Cidade Ademar, a district in São Paulo’s outskirts, in southeastern Brazil.

They were not alone. In recent years, 33 new religious sites have appeared in the neighbourhood. In Grajaú, also in the city’s south, there have been 37, and another 26 in Jardim Ângela, according to official data.

In a district of Jaraguá, in the northwest, in less than one kilometre, four new churches were opened — two of them in garages with services that hold up to 10 people. Examples of this kind are spread throughout São Paulo, most of them evangelical and in the peripheries.

Data from Pindograma, a data journalism site, shows that over the last decade, every six days São Paulo city has had a new evangelical church. The data points to their expansion in poor neighbourhoods, accompanied by an increase in the political participation of followers and pastors.

Pindograma's figures were taken from São Paulo's IPTU (property tax) and show that in 2011 there were 1,633 evangelical churches. In 2020, there were 2,186, an increase of 34%. Among the peripheral neighbourhoods, Cidade Ademar had the most significant increase, of 200%.

This phenomenon, though, comes from something which dates back before that decade, explains João Paulo Berlofa Gomes, a 34-year-old pastor of the Garage Church, known as pastor Berlofa. He lives in the city of Mogi das Cruzes, in Greater São Paulo, and notes that the rise of evangelical churches began in the late 1980s and early 1990s.

According to him, promises such as “the church and God will solve all your problems,” “they will give you victory in all your struggles,” and ” ensure financial prosperity” gained the movement followers during a time of economic crisis in Brazil, after 21 years of military dictatorship.

Twenty-four-year-old social scientist Amanda Souza agrees and points to the so-called prosperity theology. The term reflects evangelical churches’ preaching of the belief in meritocracy and success by individual merit.

“They [evangelical churches] have a preaching [message] that is very close to the workers’ daily lives. In the sense that they seek resources for social mobility, in this church space they have a leader who serves as an example of what can be achieved, based on the idea that ‘everything is possible’,” she said.

The increase in the number of churches in recent years is also linked to a trend among many new evangelical churches — a follower who decides to start a new church on their own, or when somebody has grown up within a religious organization and is given the mission to open a “unit” in a neighbourhood.

“You open the garage in your house, put four chairs in it, a pulpit, a microphone, designate yourself, title yourself, anoint yourself pastor, it's all good, it's all ready”, Berlofa summarized.

In the case of the Catholic religion, for example, there is more bureaucracy. The opening of new churches goes through a process that depends on the Vatican's approval, via the Pope. 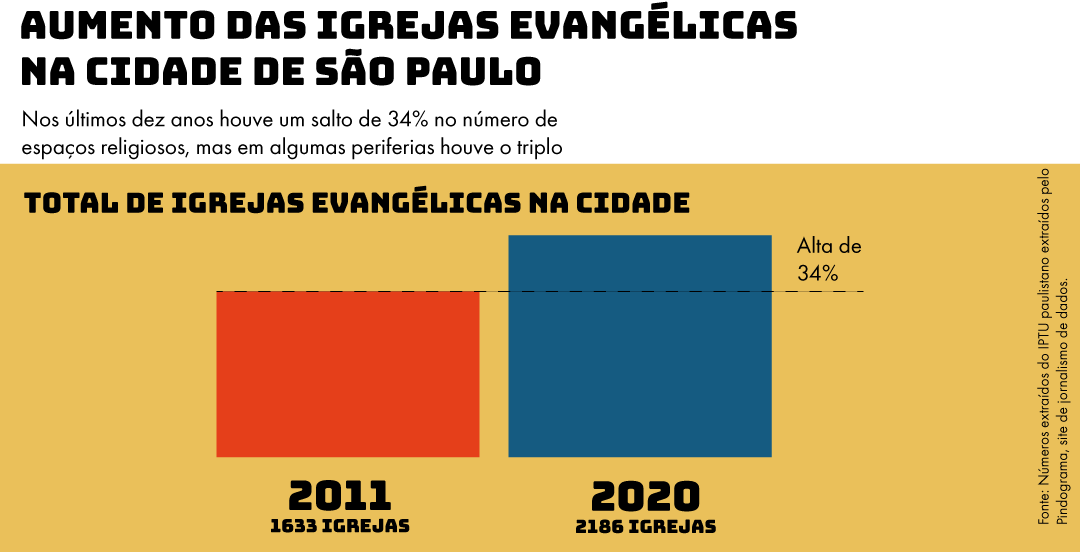 Moreover, churches and other religious entities have tax exemptions guaranteed by the Brazilian constitution.

On the other hand, those who attend religious centres emphasize their role within communities.

A resident of Jardim Ângela, in the south, 24-year-old Jéssica Keyla Barreto Santana was once a member of the Assembleia de Deus church and is now a member of the Presbyterian Church, two traditional denominations.

In a difficult moment of unemployment, she says that her family received help from other worshippers who joined efforts to collect and donate food. “They helped my mother as well as whoever needed it there in the church.”

Among the most common activities, she also mentions donations of clothes, blankets and the distribution of food parcels. “There is no point in just giving spiritual bread if you forget that your brother needs food and clothes,” Jéssica said.

Something mentioned by many of the interviewees is that this social role often substitutes for the state. A 2020 survey by Rede Nossa São Paulo indicates that for 22% of people the church is the institution that contributes the most to improving the quality of life in São Paulo, followed by the Municipal Government (19%) and local NGOs (18%).

24 year-old Darla Barbosa, leader of the youth group at Canaã Baptist Church, commented: “I believe that [this perception] is the current moment that we are living in, where people need to attach themselves to something, and they look for the church.”

“We received a lot of messages from people who were really suffering from the pandemic. We were able to refer them, get the contact details of psychologists and guide them as much as possible,” she said.

“We've opened our lines for sexual abuse and racism as well,” she added.

Alexya Salvador is a 40-year-old reverend of the Metropolitan Community Church. On its Brazilian website, the church says it recognizes “a state of need around the world in the areas of human rights and justice, including, among others, the lesbian, gay, bisexual, transgender and queer community.” For her, the church “has always been the first to reach places where public policies do not.”

“That community will often have the church as the only place where it will access social services.

“We see many serious churches, working in peripheral areas, talking about crime, about drugs, about sexuality, about preventing teenage pregnancy,” she points out.

On the other hand, she also says she sees the growth of evangelical churches as focused on money. “Unfortunately, [it is] a theology oriented towards tithing, and that often places Christianity as an opportunity to make money off the faith of others,” she said. 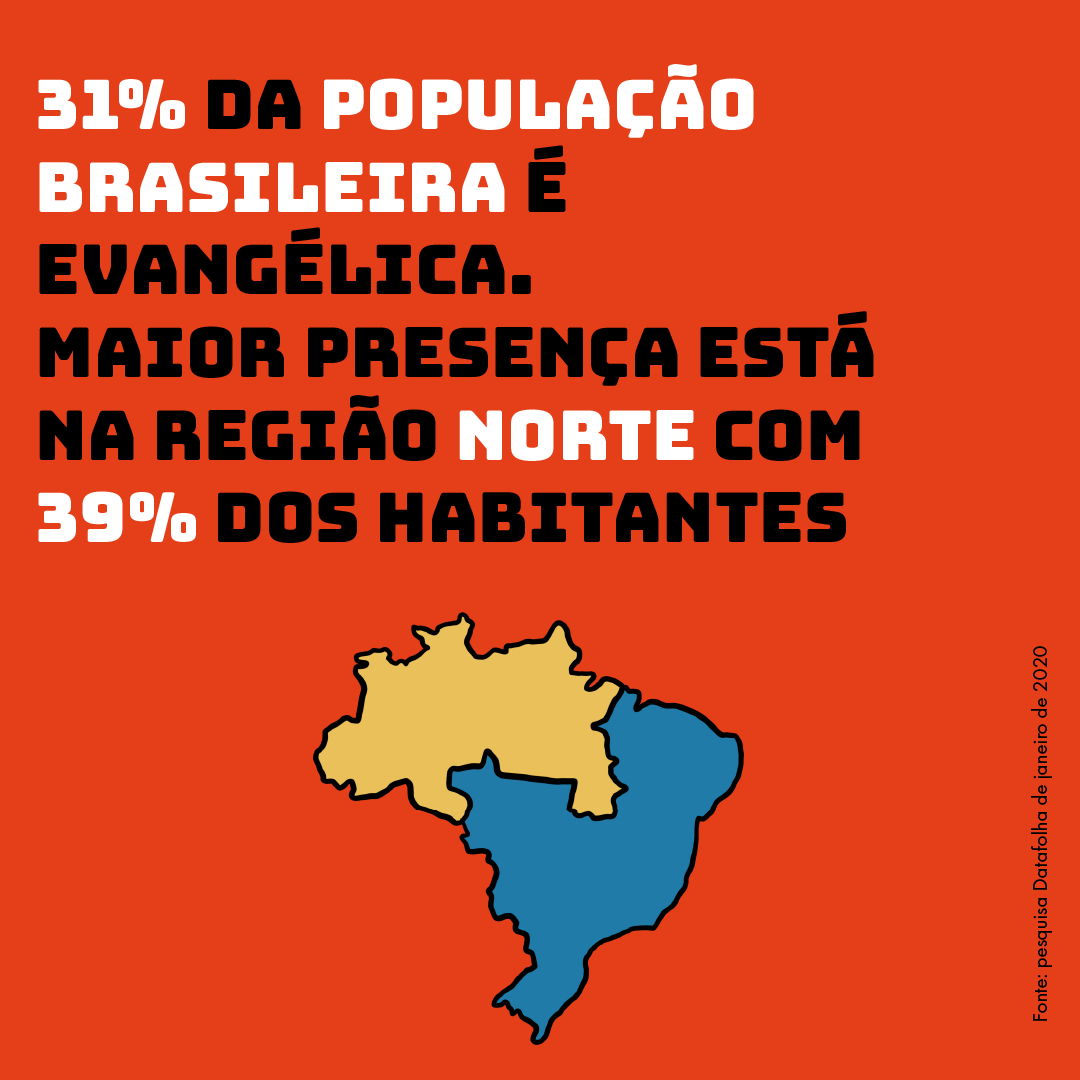 31% of the Brazilian population is Evangelical. The highest percentage is in the North region with 39%.

The problem is that this situation can turn some of these churches into an electoral platform. Currently, 31% of voters are Evangelicals, and another 54% are Catholics, according to data from the Datafolha research institute in January 2020. Among the national electorate, 85% say they are Christians.

The IBGE (Brazilian Institute of Geography and Statistics) has shown this change in recent censuses. In 1980, 6% of the population considered themselves Evangelicals, which jumped to 22% in 2010. Catholics are still the majority, but fell from 73% to 64% in ten years. Brazil is still waiting for a new census to be conducted.

In the 2018 elections, Evangelicals gained more representation in the National Congress, according to a study by Diap (Inter-Union Department of Parliamentary Counsel), based on data available on the TSE (Superior Electoral Court) website.

In the Chamber of Deputies, 84 candidates identified as Evangelicals were elected – nine more than in the last election. The number of Evangelical senators went from three in the previous legislature to seven in 2019. In total, the group that had 78 members now has 91 parliamentarians.

Recently, this presence was strengthened with the confirmation of Minister André Mendonça's nomination to a seat on the STF (Federal Supreme Court), fulfilling a promise made by President Jair Bolsonaro to give a seat on the Court to a “terribly evangelical” candidate. Mendonça is a Presbyterian pastor.

Bolsonaro's personal religion has caused confusion for Brazilians. Although he had previously said he was Catholic, he was baptised by a pastor of the Assembleia de Deus church in the Jordan River in Israel in 2016 — the pastor Everaldo was also a presidential candidate and was arrested for fraud in 2020.

The first lady Michelle Bolsonaro is Evangelical, of the Baptist denomination. A video of her celebrating the approval of Mendonca's appointment to the Brazilian Supreme Court, speaking in tongues, went viral online. Pentecostals believe that this speech, without any known translation, is the manifestation of the Holy Spirit.

According to pastor Berlofa, there is currently an increased intermixing of church and state. “We have the theory that the church should not mix with the state, but the state is influenced, commanded, exploited, sponsored, always under the table,” he said.

“Evangelicals were the president's main electoral base. Now, the bill has arrived. These figures are demanding [support].”