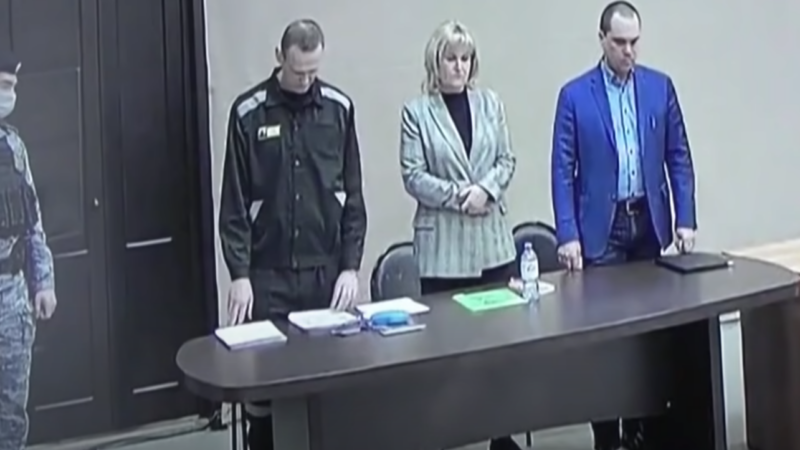 While global public attention is mostly focused on Russia's invasion of Ukraine, [2] other events taking place in Russia go almost unnoticed, including the Moscow trial of Alexey Navalny, the country's most prominent opposition leader.

Navalny returned to Russia on January 17, 2021 from his stay in a German hospital recovering from an attempt to poison him. On that day, he was arrested right inside Moscow airport on charges of violating the terms of his probation in a previous embezzlement case, and taken into custody.

After a hasty court hearing, he was sentenced to 3 years in prison [3] and sent to a prison in the Vladimir region, not far from Moscow. Given his popularity in Russia after he unearthed massive corruption and targeted President Putin [4], it became obvious that the story would not end with this verdict, and that the Russian authorities would try to find another reason to keep him imprisoned longer.

A year after his arrest, on January 25, 2022,  the Federal Financial Monitoring Service of the Russian Federation (Rosfinmonitoring) included Navalny on the list of extremists and terrorists. [5] Right after this, a new case was submitted to the Lefortovo Court of Moscow against Navalny. This time, he was accused of contempt of court and fraud [6]. He was charged with the latter because he allegedly insulted a judge who had sentenced him in a previous trial in 2021.

To understand how far-fetched this accusation is, it is worth looking closer at the list of alleged insults [7]: “Your Honor, you are breaking the law,” “My God.” The harshest words uttered by Alexey during the meeting were “disgusting”(омерзительный), “vile”(гнусный), and “go nuts” (офигеть), and they weren't even addressed to the judge.

As for the second part of the accusation regarding fraud, it relates, according to the prosecution, to the collection of money for Navalny's flagship project Anti-Corruption Fund [8] (FBK, a non-profit organization that investigates, discloses and prevents corruption in the highest authorities) that was allegedly spent for “personal needs and for extremist purposes.”

The reality is that about 300,000 people voluntarily donated their funds to the investigations of the FBK organization, of whom only four felt deceived and filed a lawsuit [9]. An investigation [9] by members of FBK reported that two of those were fake victims, and the other two were entrepreneurs investigated in unrelated criminal cases, and might have been pressured by security forces to act as they did to help with their own cases, as is often the practice in Russia.

Special measures for a special trial

Navalny's trial was conducted in unusual circumstances:  Instead of bringing the defendant to court for hearings, the court itself moved several times to the prison located in a small town in the Vladimir region. According to Navalny's lawyer [10], this is an unusual decision and a rather rare case in judicial practice. Nevertheless, the authorities did not announce why they decided to hold the hearing in a prison instead of transporting Navalny to Moscow. Journalists were allowed to watch the trial from a separate room through a TV screen, yet the transmission was frequently interrupted for alleged technical reasons. Though the hearing was formally declared open to anyone, that fact that that it took place inside a prison made it decidedly not. Everything was done to keep the trial as underreported as possible and kept away from the public eye.

One possible explanation for such measures is that, as expected, Navalny used the opportunity of the trial to express his views on Russia's invasion of Ukraine. An Instagram video of one of the hearings shows him saying: “I am against this war. I consider it immoral, fratricidal and criminal. It was started by the Kremlin gang to make it easier for them to steal. They kill for the sake of stealing. … I am against this war.”

Through his social media accounts, Navalny also called on Russian citizens to protest [11] to express their disagreement with the actions of the Russian authorities.  He concluded by saying: [12] “If prison time is the price for my human right to say what I consider necessary and the civil right to fight for a better future for Russia, then they can ask for 113 [years]. I will not give up my words and what I did.”

On March 22, Navalny was sentenced to 9 years [13] in a strict regime colony, which means he will be kept isolated for a long time, and even be restricted from communicating with other prisoners and with the outside world. In other words,  fewer visits, fewer letters and fewer telephone calls.

The moral of this travesty of justice is that Putin wants to suppress his opponent as far and as long as possible. He wants Navalny to be forgotten and the people who are inspired by him to give up.  This ban is reinforced by blocking [14] access to such social networks as Twitter, Facebook and Instagram in Russia from March 14. Previously, Navalny, while imprisoned, had the opportunity to communicate with his followers through social networks, which he continued to run with the help of his team. The new restrictions deprive him of the opportunity to disseminate his thoughts to a large audience, and prevent his followers from openly communicating with each other. This is especially important now at a time of information vacuum, when Russians are afraid to express anti-war thoughts aloud and feel lonely and divided.

The main goal ​​of the authorities is clearly to eradicate any form of opposition and destroy any opportunities for anti-war and anti-Putin discourse. That is why in his tweet, published after the trial, Navalny asks his followers not to stop:

I am very grateful to everyone for their support. And, guys, I want to say: the best support for me and other political prisoners is not sympathy and kind words, but actions. Any activity against the deceitful and thieves of Putin's regime. Any opposition to these war criminals.”

The Anti-Corruption Fund has announced [16] that they have registered outside of Russia and will continue to carry out their activities on anti-corruption investigations at the international level.