Bulgarian climate activists: ‘Mother Earth is part of the fight for women’s rights' 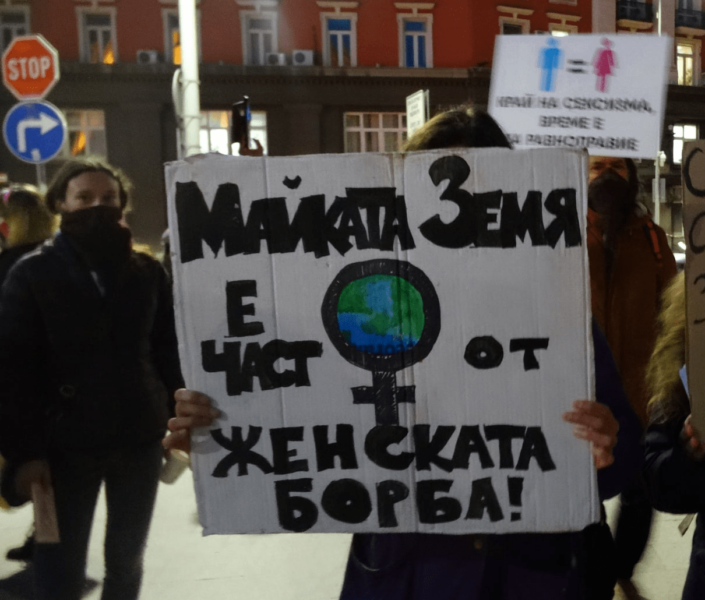 ‘Mother Earth is a part of women's struggle!’ was among the messages at the Women’s Rights March in Sofia, Bulgaria on March 8, 2020, emphasizing the link between women’s rights and environmental problems. Photo: Darina Kokonova/personal archive, used with permission via BlueLink.

This article by Velina Barova originally appeared on BlueLink Stories, an e-magazine covering Central and Eastern Europe. A lightly edited version is republished here via a content-sharing partnership with Global Voices.

The fight to reduce climate-damaging emissions is a fight for women’s rights. This conclusion is being reached by more and more advocates of both causes all over the world, including in Bulgaria. On the eve of the UN Climate Conference in Glasgow, they called for negotiations and policies that give women a voice and seek solutions to the specific negative effects that climate change has on them.

At the Women’s Rights March in Sofia on May 8, 2020, among all the bright messages related to the cause, one poster stood apart. It crossed the usual boundaries of talking about women’s rights and invited a broader discussion — “Mother Earth is a part of women’s struggle.”

“Perhaps both sides are treated with equal contempt,” the author of the poster said a year and a half later. The young activist Darina Kokonova explains that through the play on words, she had presented the Earth as a mother who gave birth to people and takes care of them — like all women and mothers. Kokonova had prepared the poster for the protests of the youth movement “Fridays for the Future of Bulgaria,” part of the international climate movement started by Greta Thunberg in 2018.

As a participant in various activist groups, Kokonova is involved in many causes. Often, while demonstrating in the street for a cause, she encounters questions about why she is not protesting for another or a third. “I’m protesting!” is her usual and honest response. “It is very uncomfortable that people do not make the connection between different causes; for me, they are parts of a bigger one,” she explains. And she feels that this perspective is missing in the women’s movements in Bulgaria. 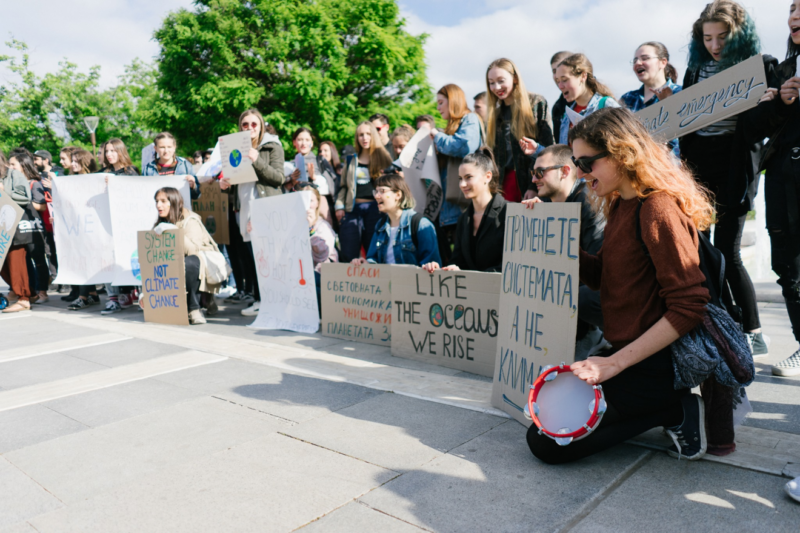 Climate change and women’s rights are topics under one discussion, activist Darina Kokonova (on the right) believes. Photo: Darina Kokonova/personal archive, used with permission via BlueLink.

We all come from nature, and we all detach ourselves from it to some extent, Kokonova reminds us, but she believes that women’s connection to nature is stronger because of their ancient role in caring for children and the home. In 2020, she painted four portraits of women from civic movements around the world, in honour of their struggles and the domestic work that accompanies them. The portraits are painted with charcoal on sheets, with spots of colour from all-natural materials that are associated with housework — beets, paprika, turmeric, baking soda, spinach. She noted:

“Women are often the first to see the negative effects of climate change because they work with the soil and are dependent on it, especially outside cities.” 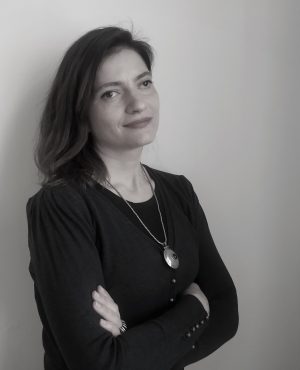 Women’s rights are strongly linked to climate justice, Rada Elenkova of the Bulgarian Women’s Fund said. “Climate change affects women to a great extent, depriving them of their rights and access to resources.” And these are just some of the specific consequences of climate change:

“Poverty, both in Bulgaria and worldwide, is feminised — a much larger part of the poor population are women. This deprives them of access to information and adequate solutions for their health and protection of their rights.”

Women and families headed by women are more likely to live in unsuitable low-value housing, making them vulnerable to floods, storms, earthquakes and landslides, according to “General Recommendation No. 37 on Gender-related dimensions of disaster risk reduction in the context of climate change,” published by the Convention on the Elimination of All Forms of Discrimination against Women (CEDAW) in 2018. According to the UN, “80% of people displaced by climate change are women.”

At the same time, the destruction of basic infrastructure could reduce the quality and accessibility of sexual and reproductive health services, leading to unplanned pregnancies and deaths at birth, according to the Office of the United Nations High Commissioner for Human Rights. Women and girls are also at increased risk of gender-based violence, including sexual violence and exploitation, domestic violence, and early or forced marriage, during and after natural disasters, CEDAW said. Climate change is pushing girls in northern Kenya back to traditional practices such as early marriage and genital mutilation, the Pulitzer Center reported in March 2020. The investigation describes how, for example, three drought seasons followed by a wave of climate change-related locusts lead to resource depletion and death among animals; this, in turn, forces desperate families to take their daughters out of school, send them abroad for circumcision ceremonies to countries where this is possible, and then marry them off in Kenya for money.

Climate change can also exacerbate inequalities in the labour market, where women face a number of challenges. As a result of natural disasters, they can be expected to meet the increased expectations and needs of their families, which will make it difficult for them to return to the labour market, summarises the Office of the High Commissioner for Human Rights.

A year ago, Darina Kokonova went with her grandmother to the market in a small town in Dobrudja. Hearing the conversations between people there, she could sense their anxiety — the harvest was small because the year had been dry. “Very often, these conversations do not take place in the cities, but people in the village experience this reality — both droughts and floods,” Kokonova noted.

“Perhaps the women most affected by climate change are those who work in agriculture as small producers, including organic producers,” said Radostina Slavkova of the environmental association “For the Earth.” It is extremely important for them to have a system for timely warnings for natural disasters, especially for extreme rainfall but also for drought, Slavkova concludes. “If a drought is expected in Bulgaria, the crops that are sown must be more drought resistant. We have regions where this is the main source of living.”

Slavkova also draws attention to women who live in coal mining regions and have suffered from the negative effects of working in this industry throughout their lives. At the same time, they are exposed to the negative effects of natural disasters, which are caused by climate change, she said. That is why demanding climate justice covers both the struggle for human rights and women’s rights, she said.

One of the UN Sustainable Development Goals to combat climate change focuses on capacity-building in the least developed countries, with a special focus on women, youth, and local and marginalised communities. Support for these communities is extremely important in Bulgaria, activists of the Bulgarian Women's Fund believe.

In early 2021, the fund launched a new program, “Equality and Climate Justice.” It offers expert training to those interested in tackling climate change and addressing social inequalities and lets parties compete for projects that address these issues, as well as engage local communities to address them. The program aims to get women and people from vulnerable groups, remote settlements and marginalised communities involved in the debate on climate change, giving them information on climate change and its social consequences.

“In the long run, these people will be hardest hit by climate change. They make the least contribution to climate change and are deprived of a number of rights such as access to information and resources. All this puts them in the awkward position of being people without a voice, who are far from the decision-making processes,” explains Rada Elenkova, the coordinator of the program.

The importance of gender aspects was also emphasised by the Paris Climate Agreement, which Bulgaria ratified in 2016. In December 2019, the parties decided to appoint national coordinators for gender equality and climate change. However, Bulgaria is not among the countries that have appointed such a coordinator. 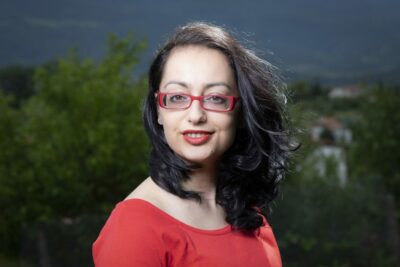 Radostina Slavkova of the environmental association ‘For the Earth.’ Photo: Ivan Donchev with the support of the Civil Association “Equal BG”, used with permission via BlueLink.

There are more women among climate activists and expert organisations, Radostina Slavkova observed. However, women are still underrepresented in climate negotiations at the highest level. On December 10, 2020, more than 400 women climate leaders signed an open letter to the British government calling for a “balanced representation” of men and women in the high-level team of the United Nations Climate Change Conference (COP26) in November 2021 in Glasgow. At the time of sending this open letter, less than 25 percent of key positions for the upcoming conference were held by women, Euronews reported.

Slavkova sees one of the possible solutions to this problem in the European Climate Law, adopted by the European Parliament in June 2021. It aims to limit European carbon emissions by 55 percent by 2030 and achieve climate neutrality by 2050:

“The faster we manage to reduce emissions, the greater the chance for all vulnerable groups, including women, to suffer less damage.”

“The European Climate Law obliges states to involve all affected groups, and each EU member state is committed to doing so through its local laws,” added Plamen Peev, senior analyst at BlueLink Foundation for environmental policies. In March 2021, BlueLink compared the European Climate Law with Bulgarian climate legislation and formulated recommendations for its improvement.

One of the initiatives aimed to support the implementation of the European Climate Law is the establishment of the European Climate Pact, which invites people, communities and organisations to take part in climate action and build a greener Europe. “It will make it much easier to hear the voice of women from the affected areas, professions and sectors and to have a bigger voice and role in decision-making,” Slavkova said, noting that it is not yet clear how the mechanism will work exactly.

In order for the decisions to be discussed by the widest possible circle of people, climate activists recommend that this should be organised in a format of citizen climate assemblies, where both experts and citizens can participate and share their perspectives, including that of women’s rights, Slavkova added.

Meanwhile, talks on climate change are taking place not only at high-level forums but also on the streets — at events for supposedly other causes. Darina Kokonova draws attention to the idea of ​​thinking of the Earth not only as a mother, but also as a sister — with a sense of solidarity and mutual connection: “For generations, people have had a connection to their environment because they realise they depend on it.”