An underground comic book displays the zeitgeist of Skopje, the capital of North Macedonia

Streets and sewers are main locations of this comix social commentary

Macedonian edition of the book “Streetdog and Rat” (Џукела и Пацоф) by Matej Bogdanovski. Photo by Filip Stojanovski, CC BY 3.0.

The comic book “Streetdog and Rat” (“Džukela i Pacof” in Macedonian) was published in October 2021. The author Matej Bogdanovski has given Global Voices  permission to publish several pages translated from Macedonian into English.

The satirical comics “Streetdog and Rat” comments on life in Skopje during the decade of  the 2010s. It consists of 40 short stories, one page each, presenting anecdotes from the life and times of two pals, Streetdog and Rat, and a host of other anthropomorphic animals (Crow, Bat, Kitty, Poodle, Frog).

It can be considered underground both stylistically and literally, as it takes place on the city streets, and below them in its sewers.

The main characters Streetdog and Rat live on the margins of society, barely making ends meet, akin to these two kinds of animals that live in cities, adapting to all the cruelty the urban environment. At the same time, the city protects them from dangers they would encounter in nature.

In a conversation published by the online magazine Okno.mk, the writer Rumena Bužarovska asked Bogdanovski whether there's any optimism in the characters of Streetdog and Rat, whom she described as “cute losers, both heroes and villains at the same time.” He replied:

The two of them are not even villains. They might be considered some sort of antiheroes, but they don't have bad intentions, which would make them villains. They are apathetic and opportunistic; at the same time, lazy and passive. While its not all the same to them when their interests are endangered, their reactions are passive aggressive. For instance in one story they complain about the efficacy of the public garbage disposal service that empty the dumpsters on time, because that deprives them of food. Or when Rat starts a protest against the increase of salaries, because he thinks that, as an unemployed person, he would suffer from the ensuing increase of prices. 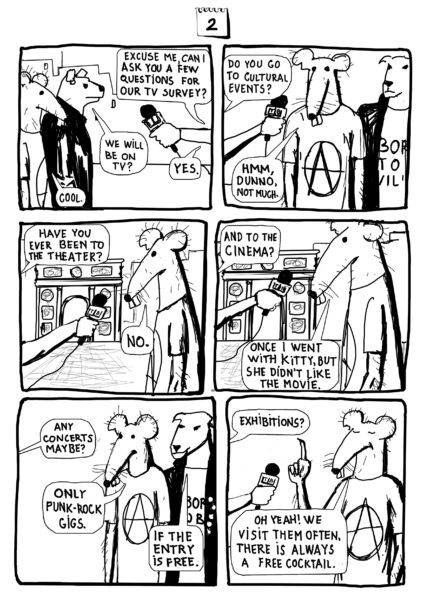 Streetdog and Rat episode 2 by Matej Bogdanovski. Used with permission.

While the author didn't conceive of the comics as overtly political, it still refers to some general conditions related to politics that affect everyday life. For instance, the fourth mini story deals with the widespread practice among populist political parties in the Balkans of boosting the number of attendees of their public events with people who are both coerced and bribed with food, such as sandwiches and ice cream. 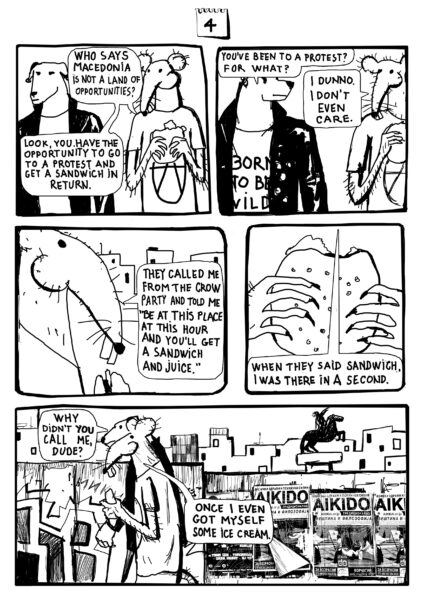 Streetdog and Rat episode 4 by Matej Bogdanovski. Used with permission.

One of the characters is the corrupt local politician Crow, who uses buzzwords such as “The Green Agenda” that became popular among politicians who think that nationalist narratives have become ineffective or spent, while trying to appear fancy, worldly and modern. 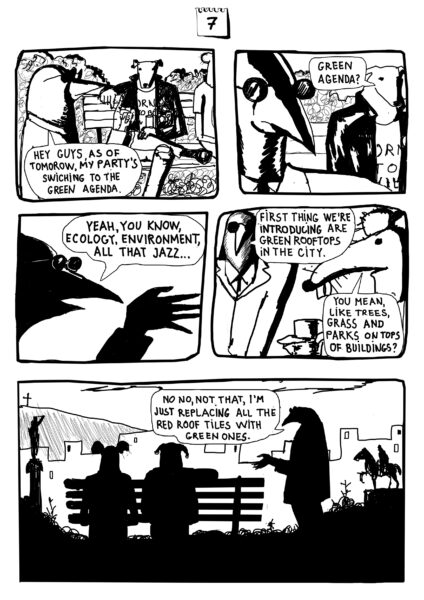 Streetdog and Rat episode 7 by Matej Bogdanovski. Used with permission.

Bogdanovski explained that, in order to convey various layers of  contradictory feelings that denizens of Skopje express about their city, at times he used the diminutive term of endearment “Skopjence” that can be translated as “our little Skopje.”

Skopje. A city thorn between the desire to be a metropolis and the quiet life in small neighborhoods. A city destroyed by irresponsible policies and boorish defilement by the urbanistic/construction mafia run by thugs trying to compensate for their lack of constructive experiences. A city tired of changes, in which several generations each have their own Old Skopje. A city which changes loudly, but rebels quietly. A city which lost its authenticity by trying to look like some other cities. A city whose citizens express all their passivity and city's failings through one word: “Skopjence.” 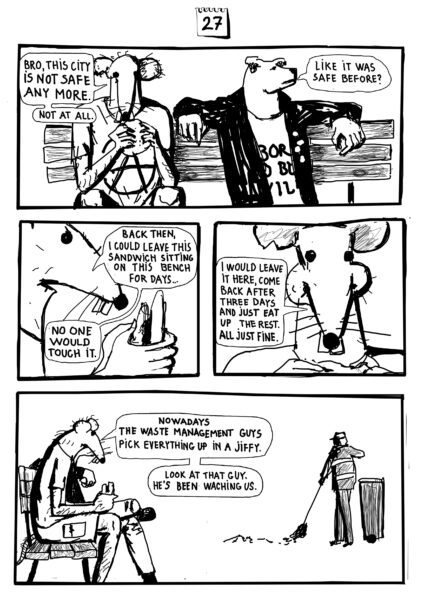 Streetdog and Rat episode 27 by Matej Bogdanovski. Used with permission.

Bogdanovski doesn't consider himself a socially engaged artist. He simply considers himself a visual artist and, above all, a painter. It is by continuing the tradition of other painters from the past who had also commented on society that he reacts to developments in society through his work, expressing his position or dissatisfaction. 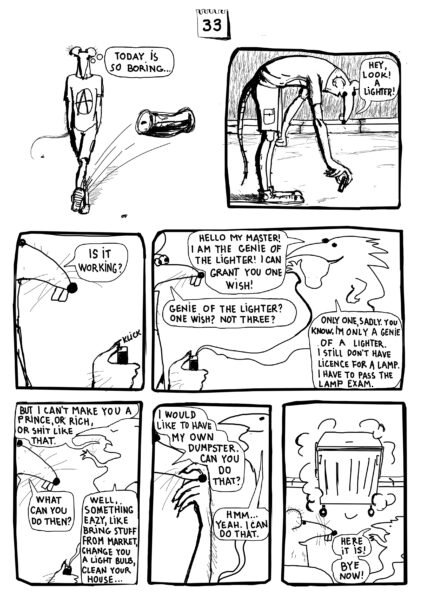 Streetdog and Rat episode 33 by Matej Bogdanovski. Used with permission.

Matej Bogdanovski was born in 1979 in Skopje, and has graduated and finished masters studies at the Faculty of Fine Arts in Skopje. Alongside with his primary job as a painter, he is also the author of comics and books, including collections of illustrated short stories and coloring books, as well as book based on memes related to the Skopje 2014 project titled “Skopje rados ti ke bidesh” (Skopje happiness you'll be).

His other comic books include “KŠŠC” (2010), a tale about Skopje night life and rock and roll subculture; “Patentalia and Tentelina” (Perfect Ten) (2016) a fantasy parody mixing folklore and fairytale motives with modern issues like copyright, piracy and body image on social media; “Street” (2020), an adaptation of the eponymous novel by Slavko Janevski; and the educational comics for kids “The Skopje Aqueduct” (2021).

More of Matej Bogdanovski's art is publicly available via his Facebook profile.