There is open support from citizens and small businesses 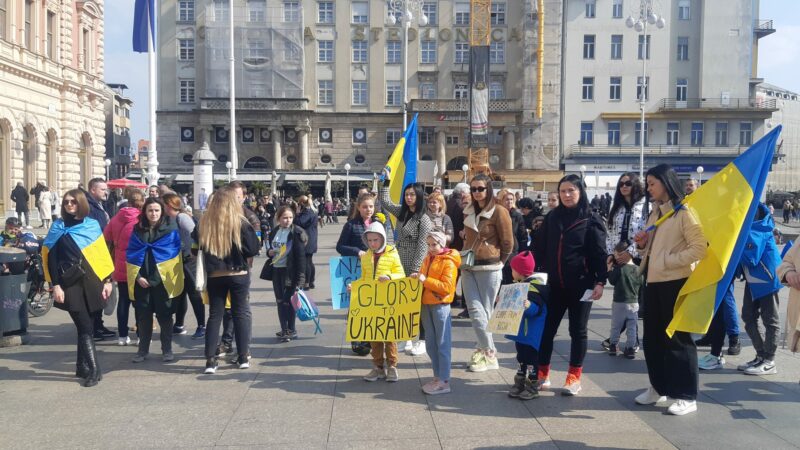 Several dozen citizens, mostly parents with children, held an antiwar protest on Ban Jelačić Square in the Croatian capital of Zagreb on Saturday, March 18, expressing support for the Ukrainian fight for freedom under the motto #StandWithUkraine.

At the protest, the organizers read an announcement condemning the war crimes perpetrated by Russian aggressors in Ukraine, while several local Ukrainians expressed personal concern for the safety of their relatives, especially those who are under siege in the seaside Ukrainian city of Mariupol.

Protest participants displayed Ukrainian and Croatian flags, shouted slogans and sung Ukrainian songs. The protest also featured banners with  photographs that compared the situation in Donbas with the siege and bombardment of the Croatian city of Vukovar in 1991. In the three decades after, the devastation and ethnic cleansing that afflicted the city become a powerful symbol of the destructiveness of the Yugoslav Wars and the aggression perpetrated by the Serbian regime headed by Slobodan Milošević.

A Ukrainian woman living in Croatia who identified herself as Ana standing next to display of photographs during the antiwar protest in Zagreb, March 18, 2022. The image on the left juxtaposes a photo of a bomb-damaged building in Ukraine with the iconic bombed Vukovar water tower. Photo by Meta.mk, CC BY-NC 2.5.

Besides Croats and Ukrainians, the protesters included citizens of Belarus. They were explaining to the passersby and media that they are equally threatened by the dictator Alexander Lukashenko, who, like Russian ruler Vladimir Putin, had already imprisoned thousands of dissidents. Among them are individuals who were jailed for simply wearing a white shirt and red sneakers (the colors of the historical Belarus state flag promoted by the democratic opposition movement). A Belarus resident who identified herself as Ljudmila appealed to the Croatian citizens to join the fight against the common evil, “which might knock on their door too” soon.

The protest participants distributed flyers to the passersby, with messages to help Ukraine. The  flyers directed people to the Facebook page of the Embassy of Ukraine in Republic of Croatia, Ukrainian Red Cross and the platform www.stopputin.wtf, which provides information and announcements about similar actions around the world.

Quite a few Croatian businesses also express open support for Ukraine. The shop windows in central Zagreb are often presenting symbols with the  colors of Ukrainian flag.

Zagreb clothing store announcing they will donate part of the profits for the “children and families endangered by war in Ukraine.” Photo by Meta.mk, CC BY-NC 2.5. 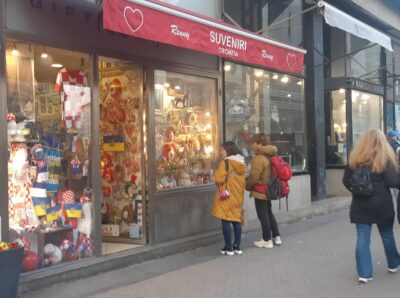 Ukrainian flags in the window of a Zagreb souvenir shop. Photo by Meta.mk, CC BY-NC 2.5.

A shop window in the main square in Zagreb arranged in the colors of Ukrainian flag, featuring antiwar messages. Photo by Meta.mk, CC BY-NC 2.5.

Local souvenir shops feature Ukrainian flags alongside the usual Croatian flags and symbols, while certain shops declare that they donate part of their profits “for the children and families endangered by the war in Ukraine.”

Small businesses displaying support of Ukraine is not so common in other Balkan capitals, where the fear of intimidation by pro-Kremlin local political forces is stronger. For instance, in recent weeks in Belgrade and Skopje, demonstrations in support of Russia attended by extremist groups, who had used violence against political opponents and people with differing opinions in the past. The Russian embassy in Skopje also issued a threat of blacklisting those who question the official Kremlin narratives.