Taiwan: The happiest nation in East Asia, according to the 2022 World Happiness Report

Hong Kong drops to 81 place, one behind Russia 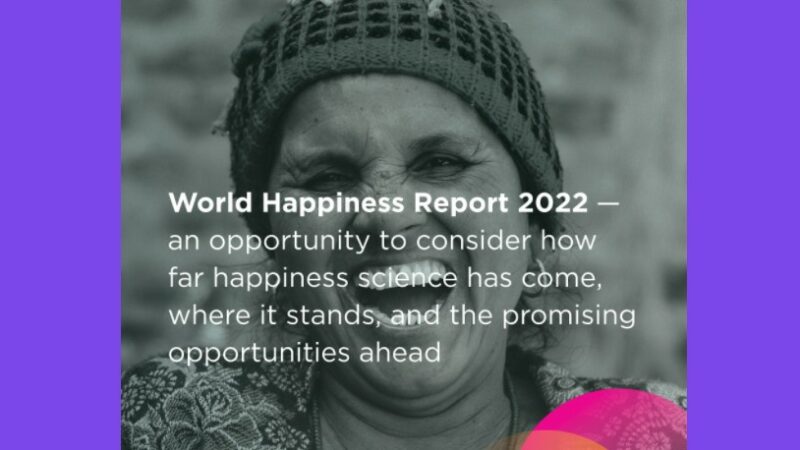 The report ranks Taiwan as the 26th happiest nation in the world, and the happiest among countries in East Asia while Hong Kong dropped to 81st place, one place behind Russia.

As for mainland China, it is ranked 72nd among 146 countries.

This year, the report highlights the effects of COVID-19 on people’s well-being and one of its key findings is:

Countries where people trusted their governments and each other experienced lower COVID-19 death tolls and set the stage for maintaining or rebuilding a sense of common purpose to deliver happier, healthier and more sustainable lives.

Jeffrey D. Sachs, the Founding Editor of the report sums up the lessons he learned from the decade-long research effort:

Now, at a time of pandemics and war, we need such an effort more than ever. And the lesson of the World Happiness Report over the years is that social support, generosity to one another, and honesty in government are crucial for well-being. World leaders should take heed. Politics should be directed as the great sages long ago insisted: to the well-being of the people, not the power of the rulers.

Taiwan has ranked the top among East Asian countries for two consecutive years. Despite facing military threats and economic coercion from China, Taiwan has suffered less from the COVID-19 pandemic when compared with its neighboring countries.

China claims sovereignty over Taiwan, a de facto autonomous state after Kuomingtang established the exiled government of the Republic of China in Taiwan upon its defeat in the Chinese Civil War.

On social media, many have raised their eyebrows on the differences in happiness rankings among the Chinese speaking regions in East Asia, as highlighted by Twitter user @pybaubry

While many Taiwanese reacted to the news with discontents about inflation surge and low salary level, they acknowledged that they enjoy more freedom than other Chinese societies.

Taiwan has also topped in Global Freedom Index, Global Economic Index, World Press Freedom Index, and EIU Democracy Index. Hence, as pointed out by one of the comments on the Happiness Report news thread on Facebook:

China’s happiness ranking has improved during the pandemic. In 2019, before the outbreak of COVID-19, it ranked 93 and this year it jumped up to 72. On the contrary, Hong Kong dropped from 76 to 81 in the same period.

In mainland China, there have been very few discussions about the 2022 Happiness Report. China has developed its own measurement of happiness in ranking its cities. The key variants are employment rate, income, environment, public security, education and etc. In 2021–2022, the top three happiest cities in China are Chengdu, Hangzhou, and Ningbo.

As for Hong Kong, while the city had not suffered from major pandemic outbreaks until recent weeks, the city has been cut off from most of the world thanks to the highly restrictive pandemic control policy and faced serious setbacks on human rights and freedom after the introduction of the National Security Law (NSL) in 2020.

On Facebook, people reacted to Hong Kong’s happiness ranking with sarcasm on the city’s political environment:

The researchers have never lived in Hong Kong. This is not trustworthy. We have the National Security Law and an improved election system. Police officers have so much knowledge about the rule of law. The government officials are so dutiful and lawful. Just come and settle here, you will be so happy!

We have patriots who love the single-party to rule Hong Kong and invincible national security law. We have no reason to be unhappy. This is definitely a smear campaign launched by foreign powers to paint the black face of our great Chinese Communist Country and its Hong Kong city.

According to the 2022 World Happiness Report, Finland is the happiest country in the world for five consecutive years and the top ten are mostly European countries except for Israel and New Zealand.  The unhappiest country, ranked 146, is Afghanistan.