Not just the U.S.: Residente portrays all of America in ‘This is Not America’

The song is the blistering cry of a continent 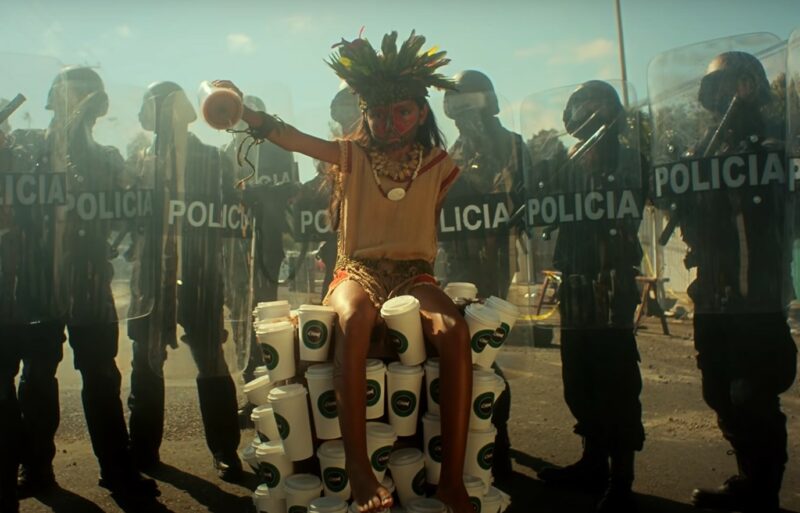 Screen capture from Residente's “This is Not America” music video on Youtube.

Popular Puerto Rican rapper René Pérez, best known as Residente, recently released “This is Not America,” a track that puts the spotlight on Latin America's struggles for peace and justice. By incorporating bold symbolic images of state repression, racism, and exploitation, the video already gathered more than 9 million views on Youtube and counting.

Throughout the song, Residente externalizes a familiar exasperation that many Latin Americans feel when the word “America” is used to define the United States and not the continent ranging from Argentina to Canada. In an interview with the BBC, Residente said: “From the U.S. point of view, everything that happens in the video is not America.”

Elements of the title, lyrics, and video are a direct reference to Childish Gambino's “This is America,” which had vividly denounced racism against Black people in the United States back in 2018.

Accompanied by Ibeyi, an Afro-French Cuban musical duo, Residente denounces a list of ailments plaguing the continent on strong drum beats, such as colonization and extraction of natural resources, police violence, the killings of journalists, and forced migration.

Residente also hails Indigenous contributions, such as the Mayan calendar and Túpac Amaru, an Indigenous leader from Peru who gave rise to the “Great Rebellion” against the Spanish crown in 1780. Residente draws a parallel between the 18th-century Indigenous leader and famous California-born rapper Tupac Shakur (2Pac).

Tupac is named after Tupac Amaru of Peru.
America is not only the U.S., man

The music video is also very striking and tells a story of Latin America through a multitude of cultural, sociopolitical, and historical references.

It opens with a scene portraying the historical figure of Lolita Lebrón, a leader in Puerto Rico's independence movement, who attacked the U.S. Capitol in 1954 in an attempt to give full sovereignty to the island, followed by symbolic images of a vibrant culture surviving amidst social protests and the extermination of Indigenous peoples. The image of the Indigenous man pulled by four police officers refers to when the Spanish colonizers attempted to dismember Tupac Amaru with horses in 1781.

Forced migration of families towards the United States is also referenced in the video, with a mother breastfeeding her child who has been separated from her due to U.S. immigration policy. Central Americans fleeing gang violence — represented by people with tattoos — are also seen on Mexico's side of the U.S. border wall in Tijuana. The fresh twist is that gang members are shown as victims, refugees, and fervent Catholics rather than through their reputation of being “animals,” a dehumanizing term.

The women wearing black hoods over their faces represent the Indigenous Zapatista political movement in Mexico. The Zapatista Army of National Liberation (EZLN for its acronym in Spanish) took control of southern parts of Mexico, in Chiapas, to install an Indigenous-led libertarian socialist government. For many, the Zapatistas have become an example of the Indigenous and peasant struggle for self-determination as these groups have been the most historically marginalized on the continent.

A large segment is dedicated to the juxtaposition of Brazilian President Jair Bolsonaro eating a steak and wiping his mouth on the Brazilian flag while an Amazonian Indigenous child watches him. In Brazil, Indigenous peoples have denounced Bolsonaro for committing genocide against their populations by encouraging the accelerated deforestation of the Amazon forest for industrial crops and pastures to raise cows for meat consumption.

There is also a significant critique of U.S. companies throughout the video, particularly making reference to megacorporations like Starbucks, Amazon, and McDonald's. Indigenous children in traditional attire interact with Western companies — such as the Amazonian child throwing away boxes of what looks like Jeff Bezos’ Amazon company. Another child is filmed eating a burger. Western fast-food companies have “aggressively expanded” in Latin America, “contributing to obesity and health problems,” according to the New York Times.

The scene where the soldier shoots the musician refers to the torture and killing of Chilean singer Víctor Jara at the national stadium at the hands of state forces after the U.S.-supported 1973 coup against Salvador Allende. Numerous shots show the frequent repression of student protests throughout the region, such as the 2014 Ayotzinapa abduction and disappearance of 43 students.

Above all, the song is a tribute to Indigenous, student, peasant, and Afrodescendant resistance to state repression and extraction of resources. For example, Residente makes a reference to Latin America's economic dependence on sugar production — which drives “killings, land loss, displacement, denial of free, prior and informed consent,” according to human rights reports — by stating that campesino workers can rebel.

On Twitter, where the response to the song was overwhelmingly positive, users were quick to analyze more references from the video in Twitter threads such as this one:

The visual references I was able to identify in Residente's video: