'We must all feel proud!' 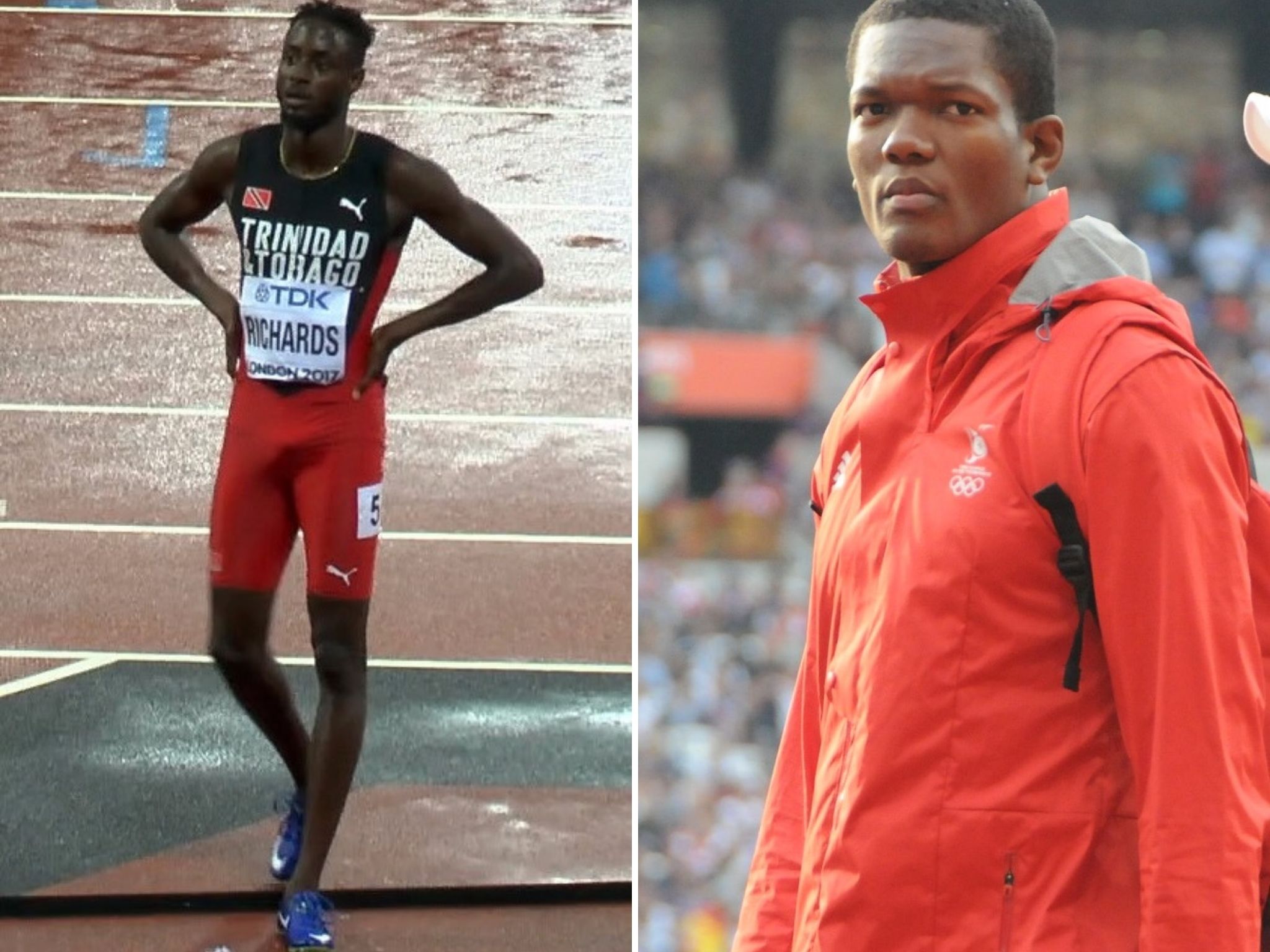 Trinbagonian track and fielder Jereem Richards after winning the Men's 200 m semi-final at the London 2017 World Championships (L) and javelin thrower Keshorn Walcott (R). Photo of Richards by ChiralJon on Flickr (CC BY-NC 2.0) and photo of Walcott by Citizen59 on Flickr (CC BY-SA 2.0).

Two back-to-back sporting wins had Trinidad and Tobago's blogosphere celebrating. On March 18, decorated javelin thrower Keshorn Walcott made a triumphant mark on the 2022 competition circuit when he won gold in the Men’s Javelin at the Yellow Jacket Invitational in Atlanta, Georgia, while track and field sprinter Jereem Richards added his name to the hall of world champions by clinching the gold medal in the Men's 400 m event at the World Athletics Indoor Championships in Belgrade, Serbia, on March 19.

In a breathtaking 84.68m throw, Walcott was easily able to fend off his closest rivals, Americans Curtis Thompson (76.68m) who took second place, and Ethan Shalaway (75.06m), who earned the bronze medal. It was Walcott's first meet since competing at the Tokyo Olympics last year.

Richards meanwhile, who currently ranks seventh in the world in the Men’s 200m, won Trinidad and Tobago’s first-ever gold medal in the 400m event. He also set a new championship record of 45 seconds by breaking the national indoor record of 45.03, which was previously held by Trinbagonian track and fielder Deon Lendore, who died in a car accident in Texas this past January. Richards dedicated his win to his late teammate.

Close behind Richards was American Trevor Bassitt, who also clocked a personal best of 45.05 to cop the silver medal, and Sweden’s Carl Bengtstrom, who clinched the bronze in a time of 45.33. Richards’ win was not unexpected, as he had also secured the gold medal at February's New Balance Indoor Grand Prix in New York.

Rihcards’ teammate Jehue Gordon called team Trinidad and Tobago's performance in Serbia “one for the books”:

Our team was small in number but big in heart. Congrats to the athletes who represented with distinction. Win loose [sic] or draw we are in this together.

In that spirit, supporters back home also celebrated with the athletes. On Facebook, Iya Ajè Bernard wrote:

We must all feel proud!!!.
JEREEM RICHARDS is a World Champion -
First T&T Athlete to win gold in the men's 400M at the World Indoor Championship. He also set a new Championship record of 45 Sec flat.
Congrats JEREEM!!!!

🇹🇹🇹🇹🇹🇹
First Trinidadian to win gold
🥇🥇🥇at the World Athletics Indoors Championships and capture the Championship Record with a time of 45.00 seconds in the Men 400m not to mention breaking the National Record🏃🏾‍♂️💪🏾💪🏾💪🏾
#JareemRichards #ReemRich pic.twitter.com/7X5wt2DPze

Even the country's prime minister, Keith Rowley, commended Richards on his performance.

Social media users also showed their love for Walcott, whose steady and consistent performance over the last decade — in a sport that has traditionally not been populated by Black male athletes — always brings the Caribbean region great pride. Walcott has previously won Olympic gold (London, 2012) and bronze (Rio de Janeiro, 2016) in the javelin throw, as well as a plethora of medals at events like the Commonwealth and Pan American Games.

Congratulations, great come back. Sometimes your fate is tested but endurance is the proof of true commitment. Keep the fire burning hero from Trinidad and Tobago. Bless up.

As Keshorn Walcott and Jereem Richards continue to add to their tally of wins, the tiny twin-island nation can expect more reasons to celebrate.