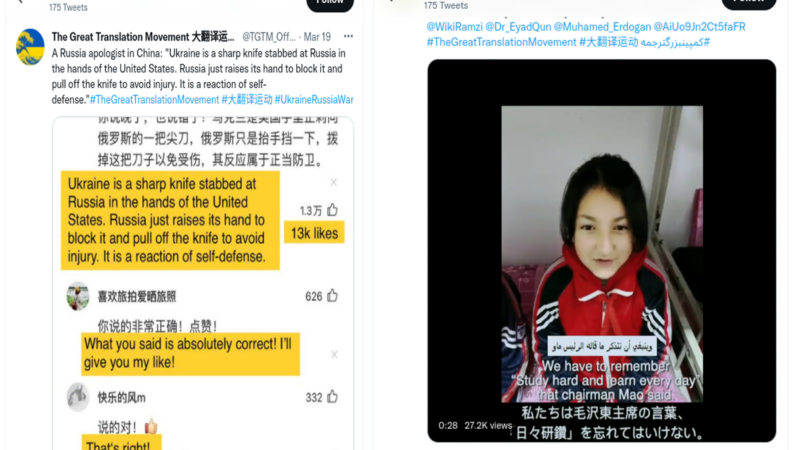 The Chinese speaking netizens then left Reddit and brought the movement to other social platforms including Twitter, Facebook, Instagram, and Telegram with the hashtag, #TheGreatTranslationMovement (#大翻译运动). The group's goal is to expose extremist Chinese patriots’ viewpoints and counter Chinese propaganda by translating problematic content from Chinese languages.

The translation movement spontaneously emerged in late February when some Chinese Reddit users on “Chonglang TV” started translating and criticizing discussions on Chinese social media about the Ukraine crisis, including calling out sexist jokes suggesting Ukraine women take refuge in China by marrying Chinese men. After an online backlash, the Chinese propaganda stepped in to curb the jokes.

Since then, a number of Chinese Reddit users have devoted themselves to translating Chinese social media’s view on the Ukraine crisis. However, as the effort began to catch public attention, Reddit shut down the “Chonglang TV” channel, which had more than 53,000 members, in early March, citing privacy concerns — a pro-Russia mainland Chinese user’s identity was exposed in the channel.

The official Great Translation Movement Twitter account has accumulated more than 15,000 followers in less than three weeks. On average, it creates 5–10 posts daily highlighting Chinese online patriots or the so-called “Little Pink’s” antagonistic reactions to current affairs, international news and online incidents. Below is one typical example of their translation posts:

Without China’s support to Russia, there won’t be war, let alone anything thereafter to make things up.#TheGreatTranslationMovement #大翻译运动 pic.twitter.com/SzItmoMwGq

The online movement soon caught the attention of Global Times, one of China's major state-funded media outlets. An opinion piece by Wang Qiang, a commentator with military background labels the netizen action as part of a “Color Revolution,” a movement to change China's single-party political system:

The goal of the so-called Great Translation Movement is to reinforce and distribute hate. It is not progressive, it has its own agenda and it targets a particular ethnic group. The consequence, however, would not be confined to Chinese but all Asian people. The initiator's idea is very evil.

Chang Ping, an exiled veteran Chinese journalist, however, pointed out that the Great Translation movement is not counteracting against Chinese people, but a propaganda and censorship machine that produces a large number of patriotic “zombies” or the so-called Little Pinks:

How to counteract the zombies? One may be able to convert a few of them by means of persuasion. But the best way is to remove their spells. Zombies are afraid of sunlight, that’s why Russia, China and North Korea imposed strict internet censorship.

I support the Great Translation Movement initiated by netizens. The translation not only exposes how the CCP dictatorship poisons its people with toxic ideology and twisted their thoughts and feelings, it also reminds governments and people from other countries to be aware of the CCP’s propaganda and spreading of disinformation – how it uses disinformation to distort the public opinions. In the face of Russia’s invasion of Ukraine, Xi’s power bloc helps Putin in his info-war […]

Some users suggested that the organizers of the Great Translation Movement should review and provide more context for the translations so as to prevent the spread of hatred against Chinese people.

Others believe that the translation efforts are creating a dilemma for Chinese censorship authorities. Namely, if it censors problematic content from the Little Pinks, they may lose some supporters; if the authorities ignore them, they are tacitly approving them.

In face of such a dilemma, Wang Qiang from the Global Times suggests that the Chinese propaganda should consolidate its own elite translation team to spread positive stories about China.