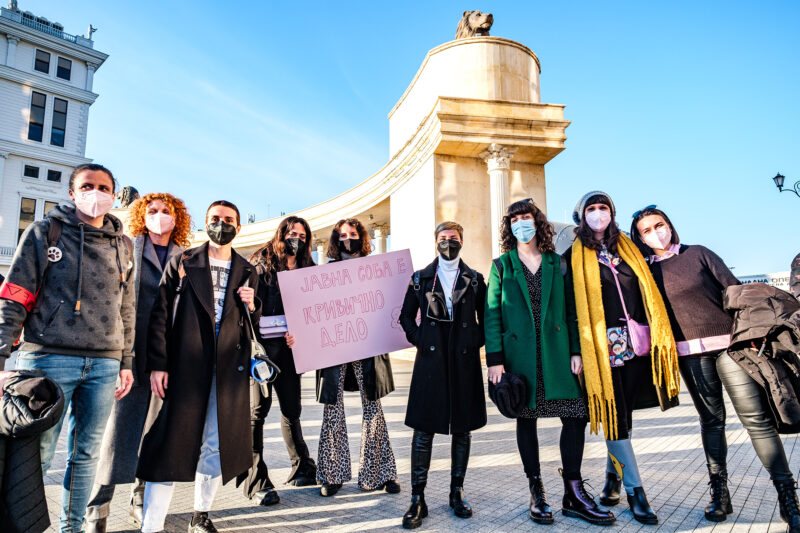 “Public Room is a Crime” banner on the February 3, 2021 protest against impunity for sexual predators in Skopje, North Macedonia. Photo by Vančo Džambaski, CC BY-NC-SA.

“Javna Soba,” meaning “Public Room” (an allusion to the term “public house,” a synonym for a brothel), was a sexual predator group on Telegram with over 7,000 members, used for sharing private nude photos or videos of girls and women from North Macedonia and abroad, including child pornography.

The group’s founder, Darko Kostovski and the group’s moderator Mihail Panevski were found guilty of misusing nude photographs of women and girls and sharing personal data (first and last names, telephone numbers, and personal addresses) in the “Public Room” group on Telegram. As a result, apart from their previous 13 months of house arrest, the court sentenced them to four years in prison.

The court found both men found guilty of distributing illicit text and audiovisual content between December 19, 2019, and January 28,  2020. They were also charged with allowing group members to share videos containing child pornography, including sexual abuse involving a four-year-old child.

the thing that triggered me, and why i decided to share this with the people that follow me, was the fact that there were still pigs that defended them. these are comments from some instagram post i have not seen, i got these on facebook:

The court considered both men flight risks and ruled sentenced them to house arrest until they are sent to prison.

The incident came to light about two years ago after women and various NGOs came forward to complain about the group’s activities. 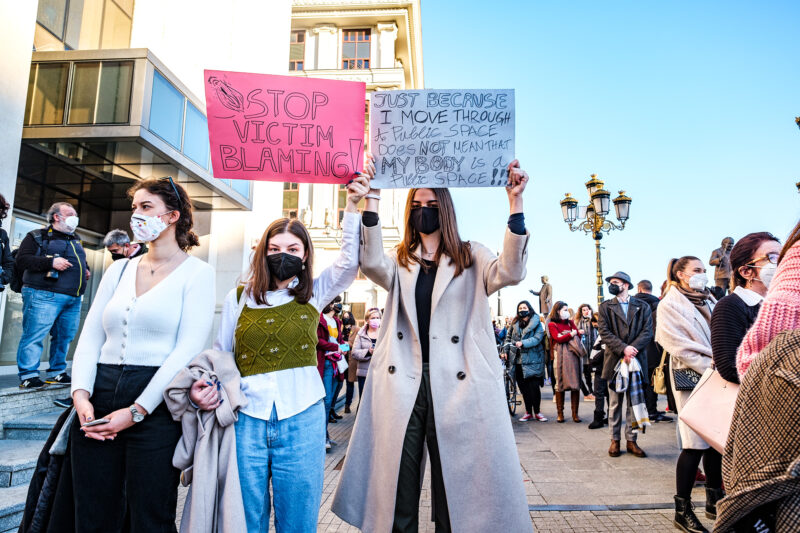 Protestors holding banners reading “Stop victim blaming” and “Just because I move through public space doesn't mean that my body is a public space!!!” in front of Public Prosecution Office in during February 3, 2021 protest against impunity for sexual predators in Skopje, North Macedonia. Photo by Vančo Džambaski, CC BY-NC-SA.

Public dissatisfaction exploded with a massive protest against impunity for sexual predators in January 2021. The group continued to operate freely a whole year after their existence became widely known, sparking the protest on the one-year anniversary of the scandal. Sixteen women's rights organizations, human rights groups, and numerous activists organized the protest that demanded accountability from the Ministry of Interior and the Public Prosecutor Office. 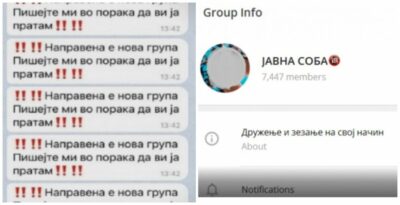 A screenshot of messages announcing the opening of the new group after the original “Public Room” was busted. The message says “!! A new group has been created. DM me to send you an invite!”

The Public Room Telegram group is currently closed. Toward the end of 2021, there were efforts to reactivate it at least three times. During that time, more than 200 people joined in a single day and 61 photographs and 14 videos were shared without the subjects’ consent. The police reacted quickly and as a result, the group and its content were blocked for the members.

At that time, the authorities announced they were investigating the “Public Room 2”  case which is currently, it’s in a preliminary criminal investigation phase.

Journalist Katerina Dodevska expressed concern that thousands of sexual predators in these groups will suffer no consequences at all.

Only two men who were part of “Public Room” [groups] have been convicted… However these  verdicts don't bring much hope to the victims because  they are only two, while the public is aware that the Telegram groups “Public Room 1″ and “Public Room 2″ combined  had around 12.100 members. Telegram refuses to provide the members data to the Public Prosecution Office, which means that the prosecutors have their hands tied in regard to conducting investigations about these cases. 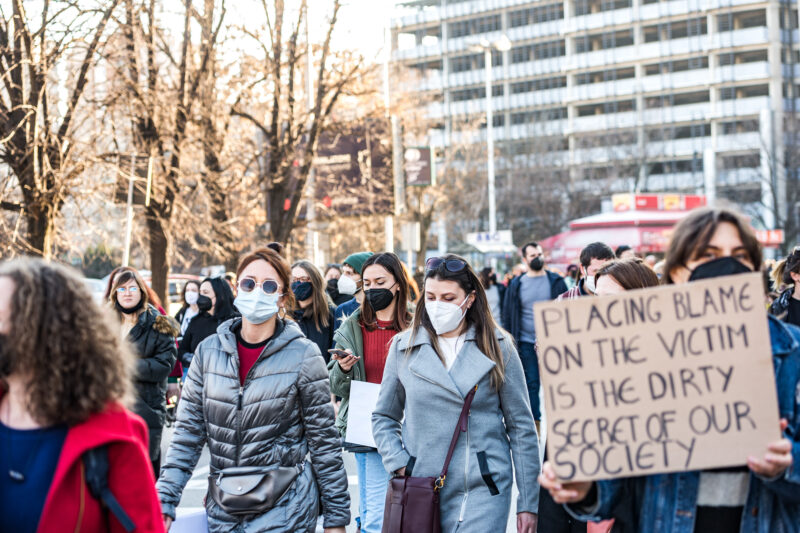 Protestor holding a sign reading “Placing blame on the victim is the dirty secret of our society” during February 3, 2021 protest against impunity for sexual predators in Skopje, North Macedonia. Photo by Vančo Džambaski, CC BY-NC-SA.

Gender Equality Platform, an informal network of civil society organizations and individuals that organized participated in the 2021 protest and continued to demand accountability and protection for the victims of gender-based violence, issued a joint statement after the verdict for the two sexual predators was announced on March 11. One point of concern addressed involves the fact that the verdict of four years in  prison is bellow the legal minimum of five years for such  crimes, and twice as short as the legal maximum, which in their view promotes imputnity.

Civic organizations express deep dissatisfaction with the resolution of the “Public Room” court case in the first degree.  With this verdict, the court sends a message that the punitive policies in the country are insufficient, inappropriate and incomplete regarding crimes which include those covered by Article 193-a of the Criminal Code. Namely the law proscribes a prison sentence of minimum 5 and maximum 8 years, while the court ruled a sentence which is half of the minimum proscribed by the law. Moreover, this sentence applies to organizers and creators who enabled thousands of other perpetrators to engage in organized sexual violence in different forms, while their victims include enormous number of women and girls who still suffer the consequences of those actions.

We know that the court is independent institution and that some might consider this reaction as an attempt to influence the judiciary, but  what we are trying to do is send a message that the court must take care of both special and general prevention. On one hand it must stop all other perpetrators from committing such acts, and on the other hand to make those who had already perpetrated such acts to  realize the seriousness of the crimes and not to repeat them. Therefore we consider the verdict to be insufficient, inappropriate and incomplete.

In December 2021, the Ministry of Justice of Republic of North Macedonia began a process to amend the Criminal Code by adding sexual harassment and stalking as separate criminal offenses, as recently noted by the Gender Equality Platform.

In this context, the Platform demanded urgent upgrade of the Criminal Code and the Law on Criminal Procedure in order to adhere to the Istanbul Convention on preventing and combating violence against women.

The Platform also demanded urgent investigation of a Facebook group used for sexual harassment of Roma women, as well as a thorough, complete, and unbiased implementation of all necessary procedures that would ensure protection of victims of sexual harassment and related crimes. They also demanded that judges, lawyers, and public prosecutors receive proper education around gender consciousness and cases of sexual violence.