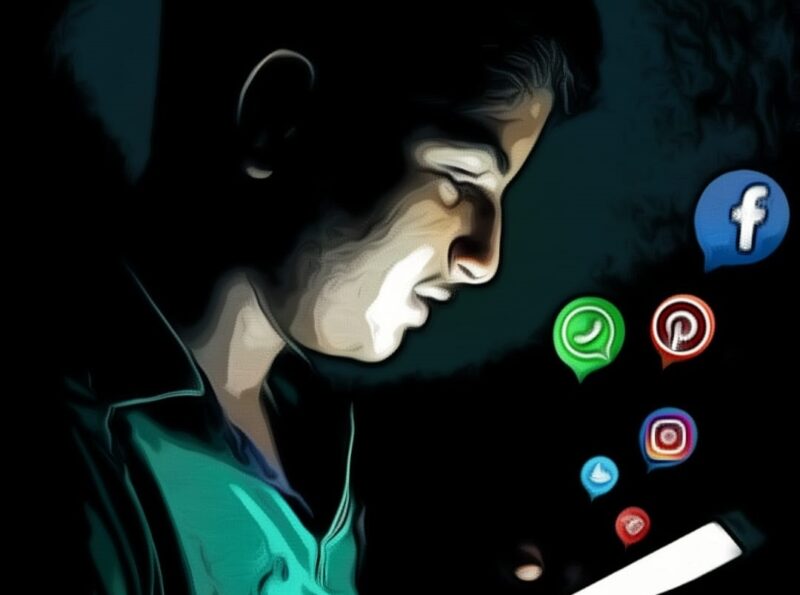 Russia’s invasion of Ukraine at the end of February coincided with important legislative assembly elections in India, bolstering the expression of expansionist sentiment on the campaign trail and elsewhere.

Expansionist narratives have long been present in Indian media, but the war in Ukraine has given them an additional boost. Now that legislative assembly elections are over, with the ruling Bharatiya Janata Party (BJP) having won major states—setting the tone for India’s 2024 general elections—pro-BJP media are seeking to humiliate and silence dissenters.

The BJP and hyper-nationalist Hindutva groups have also used the war to position Indian Prime Minister Narendra Modi as an indispensable global leader and promote the establishment of a “United India.”

Diplomatically, India has remained neutral with regard to the conflict between Russia and Ukraine. Within the country’s borders, however, mainstream media and far-right groups have expressed support for Putin’s invasion. Not only is Russia India’s oldest and most strategic partner, but Putin’s expansionist ideology bears striking similarities to the hyper-nationalism of one of the key concepts of Hindutva: “Akhand Bharat” or “One India,” and commentators are drawing parallels between the breakdown of the Soviet Union and the division of India after colonial rule.

Such narratives are prevalent on high-engagement extremist Hindutva Facebook pages and unverified news media outlets operating on social media. They can also be found on BJP-aligned broadcast media, albeit in a more subtle form. Canned expressions of pro-BJP sentiment – such as “hail Modi” – showing up in the comments section below social media posts appear to be the work of bots. There have been allegations that mega-conglomerate Reliance Industries is funding a firm that promotes pro-BJP advertisements and false news stories on Facebook.

Since Russia invaded Ukraine on February 24, Indian social media has been buzzing with tweets and memes demanding that India’s Prime Minister Narendra Modi take advantage of the world’s preoccupation with Ukraine to mimic Putin and annex Kashmir and other territories. According to this narrative, India’s ally, Russia, is setting an example of “state reunification,” and the West is not stopping it.

The Kashmir valley is a disputed area claimed by India, Pakistan, and the Kashmiris themselves. When India gained independence in 1947, its largely Muslim-populated territories were carved out to form the state of Pakistan. Kashmir was the exception and was eventually divided into Indian-administered Kashmir and Pakistan-administered Kashmir, called “Pakistan Occupied Kashmir” (PoK) in India.

While Kashmiris await a UN-supported referendum that would grant them the right to choose their future, BJP leaders have vowed to take over all of Kashmir. India’s 2019 dissolution of Jammu and Kashmir’s statehood was an initial step in that direction.

Video on Facebook: “The world is busy in the Russia-Ukraine conflict and Modiji has made his move on PoK?”

The item, which received half a million views, is an interview with a politics expert who states that India should follow the example of Russia and attack Pakistan. India should “grant independence” to the Pakistani provinces of Sindh and Balochistan, and annex “Pakistan Occupied Kashmir.” The item claims that other countries have done nothing to stop the Ukraine war, and they will similarly not stop India if it decides to attack Pakistan. The interview was conducted by “The Newspaper TV,” which operates on social media. 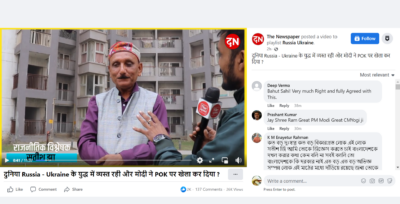 See more analysis of this media item here and other items showcasing this narrative, including those dating from before Ukraine’s invasion: IN_164,  IN 236, IN_268,  IN_272, IN_305

This narrative arose as a result of Russia’s invasion of Ukraine in February 2022. Hindutva groups have shown support for Putin, claiming that the Russian leader’s aspiration to create a new USSR, or Russian empire, are similar to the Hindutva ambition to create a “United India”. This narrative is broader than the previous one and builds on it.

The concept of  “Akhand Bharat” (“One India” or “United India”) is among the key tenets of the Hindu nationalist movement. Hindutva groups, therefore, openly celebrate the ideological similarity with Putin and express support for his expansionist ambitions.

Many Hindutva supporters have also gone so far as to demand that India attack Pakistan and return India to its pre-independence geographical state. For them, Russia has a legitimate claim over Ukraine as a former Soviet state, as does India over Pakistan, as formerly a part of India, along with other South Asian countries such as Bangladesh, Tibet, and Nepal.

This meme superimposes a photo of Vladimir Putin’s face on the body of Yogi Adityanath, a prominent BJP politician, along with the caption “Putin started project Akhand Russia,” drawing parallels between Putin’s attempt to “unite Russian” by conquering a former Soviet republic and the vision of “Akhand Bharat” or “One India.” Yogi Adityanth is a proponent of Hindutva and is a member of the RSS, an organization pushing for the creation of Akhand Bharat and the “reuniting” South Asian countries that were divided after and during the colonial era. This meme has been shared in Whatsapp groups and on Facebook. 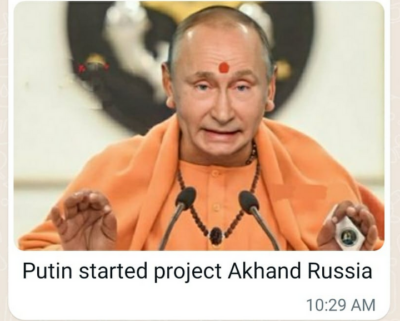 See more analysis of this media item here and other items showcasing this narrative: IN_287, IN_291

When the BJP government came to power in India in 2014, Prime Minister Narendra Modi promised to lead India in becoming a world superpower. For the BJP and pro-Modi groups, that opportunity presented itself with the war in Ukraine.

In general, Modi is seen as a superhero by his followers, but since Russia invaded Ukraine, memes and posts by right-wing groups have promoted the vision of Modi as a powerful “alpha male” or “Vishwa Guru” (“World Leader”) who is capable of stopping the war, especially as Ukrainian diplomat Igor Polikha has requested India’s support.

In broadcast media, too, Modi was hailed as a global leader and savior following the controversial evacuation of Indian students from Ukraine.

Pro-Modi media cannot be examined in isolation from state legislative assembly elections. At a time when Modi has been criticized for rising anti-Muslim violence in India, media reports have tried to whitewash his image by portraying him as a strong and necessary global leader.

Video on Facebook: “The whole world is astonished as to why Putin only listens to Modi”

Unverified online news channel “NIO TIMES” shared a Facebook video that glorifies Putin and argues that the West is powerless before Russia and India’s leaders. Since Putin and Modi’s alliance threatens the West, they have used Ukraine to bait Russia. The item concludes by saying that Narendra Modi can prevent a global catastrophe by convincing Putin to calm down. The item, which garnered 179k likes, implies that India must support Russia.

See more analysis of this media item here and other items showcasing this narrative, including those hailing Modi’s government for evacuating Indian students: IN_282, IN_295, IN_296, IN_305, IN_310, IN_313. Also, here is an analysis of Twitter thread by an independent journalist mocking this narrative: IN_264

Identifying misinformation and disinformation online can feel like a hopeless game of Whack-a-Mole. On March 10, at the 2022 MozFest hosted by the Mozilla Foundation, our Civic Media Observatory team discussed how Observatory methods and research use narrative, contextual and subtextual analysis to build a fuller understanding of media ecosystems. The session “Beyond fact-checking Whack-a-Mole: Using narrative and contextual analysis to decode mis/disinformation,” is available here, just sign up for a free on-demand ticket!

Next week: More on Russia-Ukraine narratives

Civic Media Observatory researchers are decoding narratives about Russia’s Ukraine invasion in their respective countries. This is an ongoing investigation — see next week’s newsletter for more.