Fleeing Odessa, yet planning to return: How humanitarian organizations cope with the war in Ukraine

An interview with Ukrainian humanitarians forced to flee 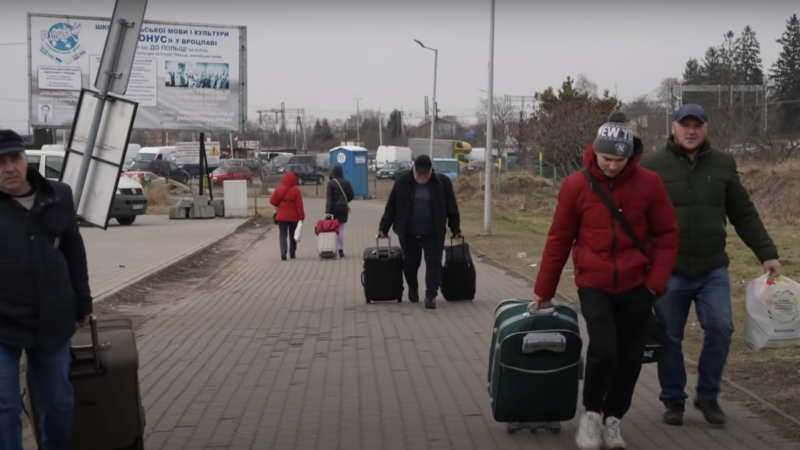 Many Ukrainian refugees have fled to Poland as Russia intensifies its attack on Ukraine. Image via PBS news YouTube channel.

On March 3, eight days into Russia’s invasion of Ukraine, Alla Soroka and Robert Gamble were forced to flee Odessa, the city where they have worked on eradicating child homelessness and facilitating nonviolent conflict resolution for 20 years. As the war drags on, three million Ukrainians have already left for neighboring countries, and the nation now faces an existential threat. Whatever will emerge from the rubble will take decades and generations to rebuild.

Alla Soroka is a winner of the 2017 International Peace Maker award and has been working as a psychologist with at-risk youth in prisons and orphanages since the late 1990s. Robert Gamble, a Presbyterian minister from Florida, came to Ukraine in 2005 to assist with the child homelessness epidemic. In 2010, the two formed This Child Here, training foster families and organizing Alternative to Violence programs for those internally displaced by the war in Donbas.

On March 4, I met Alla and Robert near the Bucharest airport as the two reflected on being forced to leave their home. Their city of operation, Odessa has been under constant bombardment since February 26, as Russian troops prepare for a full invasion of the city. As the displacement of Ukrainians is expected to become Europe’s worst refugee crisis this century, many humanitarian organizations in the country are preparing plans for how to return and rebuild. The following is an interview between Alla, Robert, and Global Voices.

Robert: Of course, when the tensions started escalating last year, everyone thought it was just a bluff. It didn’t make any sense. When the shelling started, my brother-in-law called me. He was a colonel in the US Army, and he said, “Wars of this kind spread, and they spread very fast. Maybe they will overextend themselves, but they will get to you. You have to get out while you can.”

Alla: On March 2, there were reports about the neighboring city getting shelled by Russian troops from Moldova. Now Odessa is getting bombed. All the troops, from every side, are heading for Kyiv, and then surrounding the population centers. They are trying to get to the capital from every direction, split the Ukrainian military into four, and cut off all paths into the cities.

The Ukrainian soldiers have been incredible so far. There was the one soldier who told the Russian ship to go fuck itself. Now everyone has been quoting him across the country, it is on every sign, it is the first thing out of people’s mouths when they encounter Russian troops. It is no longer a curse, it has become the official political platform of the country.

There is definitely a fighting spirit, a certain bravado. Everyone was very organized, no panic, and very little fear when it all started. A lot of people have the feeling that we have been fighting for eight years, and we are alone in this fight, no one is coming to the rescue. There is a certain headlessness that, in some way, is vital at this moment. It is impossible to stay levelheaded.

A lot of people are saying thank you to Putin for uniting us. The people have gained inordinate respect for Zelensky. Even those who were very critical of him are now saying they will defend him. In Odessa, everything is still working. You can get free phone calls, free gas, all the channels are working, the internet is fast, all the media channels have united together, regardless of their ideology. They have been good at creating a united front along the information line.

Robert: You can feel the sentiment on the streets of Odessa. There is a lot of anger. It makes sense, people have seen what is happening to their country. You see the tanks crushing civilian cars with people in them. The bombing of residential neighborhoods. The dying kids. The looting by Russian soldiers. But it is not universal anger at Russia.

My last wife, ethnically Russian, fought with her mother for three years after [the annexation of Crimea in] 2014. Before the war, her mother used to come to Odessa every summer. When the war started [in 2014], she said she’ll never go back because there were Nazis there. Of course, a few years go by, she finally gets convinced to come visit again, and she has this epiphany of how ridiculous it all was, how there were never any Nazis to begin with. So she sold her apartment in Russia and permanently moved to Odessa.

Alla: I was trying to convince my parents to leave Odessa. They said no, “We like our home. We are waiting for the Russians to liberate us.” They are exclusively watching Russian news through the internet. This is my fault. I bought them a computer and taught them how to use the internet to talk to my sister living abroad, and now it has turned them into two propagandists.

They have always been pro-Russia. My father just recites the Russian news: “They are all Nazis, they are killing their own people, it is all NATO’s fault.” I tell him that I’ve worked with the soldiers in Donbas, I’ve worked with these families, I’ve spent months with them, and he just doesn’t believe me.

When the dust settles

Think about kids looking at those horrific videos of the war over and over and over again for the next decade. It will only continue to feed hate. It will divide half the continent. There is a long way to go until this war ends, and no one will be happy with the outcome. But all of the hard work must begin when the dust has settled.

Alla: We couldn’t just sit there and listen to the bombs and the news. I knew the only way to put our experience to good use for Ukraine was to leave, organize support, and return back with strength. That is how we will lead the country — not just through the war — but out of it. Right now, it is still very uncertain.

When the Jews left Egypt, they lived in the desert for 40 years. For 40 years, until a generation grew up that knew life outside of slavery. In Russia and in Ukraine, our future has been canceled. On one side, they are getting thrown into prison for walking outside with a sign, on the other side, they are fleeing their homes from mortars and sleeping in metros. Can you even begin to imagine what kind of future we have been left with?