March 14 is Doctors' Day in Turkey 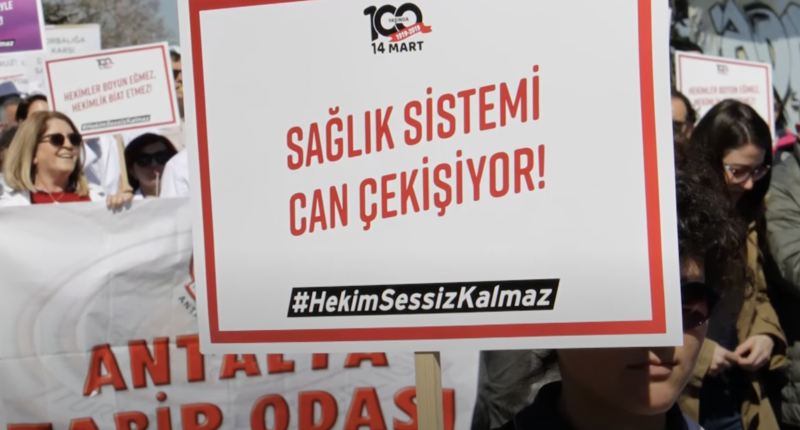 A screenshot from a video shared by the Turkish Medical Association from March 14 that marks Doctor's day in Turkey.

March 14, is celebrated in Turkey as Medicine Day, also known as Doctors Day. To mark the holiday, health workers across the country said they would be on a two-day strike starting March 14 despite earlier warnings from the Ministry of Health against the protests. The workers cited poor working conditions, low wages, and growing violence against representatives of medical institutions.

There has been a significant spike in health specialists leaving Turkey for better opportunities abroad in recent years, highlighting the desperate situation in the country. According to the Turkish Medical Association (TBB), an independent medical and health professional association, some 4,000 doctors have left the country in the last ten years.

During an International Women's Day speech President Recep Tayyip Erdoğan referenced the issue of health workers departing en masse, saying “let them leave if they want to leave.” His words have only exacerbated the discontent. One district mayor, from the ruling Justice and Development Party (AKP) in Çorum, Taner İşbir, even suggested stripping departing medical workers of their citizenship, in a tweet that the mayor later deleted after criticism.

This is not the first strike by health care employees. Since October of 2o21, healthcare professionals have been voicing discontent as a result of poor working conditions, economic hardships fueled by soaring inflation and currency devaluation, and growing cases of violence against medical professionals. In November of last year, health care workers marched from Istanbul to Ankara to draw attention to the harsh working conditions medical workers faced during the pandemic, including mobbing, long shifts, and economic hardships. Another strike took place in February 2022.

According to Dr. Sebnem Korur Fincanci, the chairwoman of the TBB, in addition to low salaries, “the devaluation of the profession, over many years, since the beginning of the rule of the AKP [ruling Justice and Development Party],” is what is driving people away from health professions in Turkey.

In a statement issued on March 14, the TBB said, “At this point, it is clear to everyone that the health system is clogged up.  The health of the society is deteriorating day by day, and access to health care is become harder. In an environment where the health system is unsustainable, we work for low wages and heavy workload, under the threat of violence and malpractice. We are at a time where our professional honor and labor are rendered worthless.”

Meanwhile, some officials remain in denial.

Devlet Bahceli, the leader of the National Movement Party, which is in a coalition with the ruling Justice and Development Party, addressed members of his party at a meeting on March 15 and denied that there was an issue of workers moving abroad. Bahceli instead, took it out on the TBB accusing them of spreading propaganda, “Now they [TBB] are saying that our doctors are leaving Turkey. They are clueless about our doctors, whose hearts beat with love for their homeland and nation, are not leaving nor planning to leave. If there is anyone who needs to leave this country, it is a handful of separatists in the administration of the TTB. Let them go, let them leave and not come back. And if anyone leaves in addition to them, it is up to them.” Bahceli has made similar remarks over the years. In September 2020, the party leader said the TBB was dangerous and that it was disseminating threatening information.

Despite the new promises delivered by President Erdoğan on March 14, protesting healthcare workers said they won't stop until their demands are met.

We Want Concrete Steps, Not Distraction: The resistance continues.