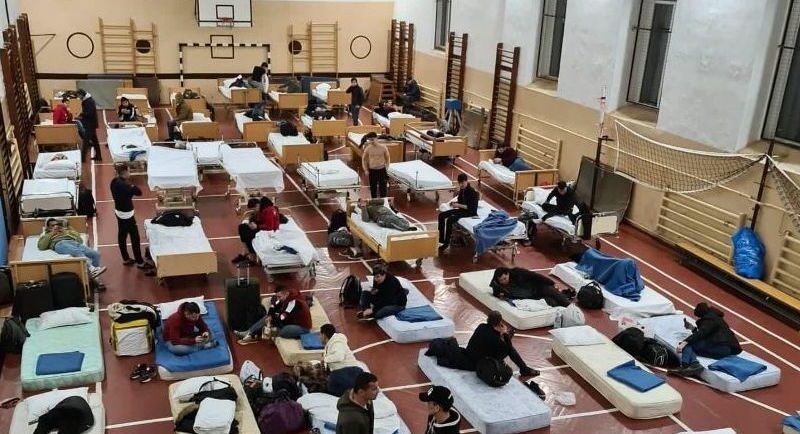 Every year, many Turkmen students arrive in Ukraine for better education. However, since Russia invaded Ukraine hundreds of students have been left in limbo as they try to flee bombings Ukraine, with no help from their government.

“My children are in Odessa, and I am now looking for ways to get them out of there…If there is any information on how to cross borders, please share.” This mother's heartbreaking message was shared on the Facebook group “We are from Turkmenistan” on March 4.

Most expatriates are told to turn to their embassy for resources and guidance in case of an emergency. Unfortunately, during the first few days of Russia’s war on Ukraine, the Turkmen embassy was largely unhelpful when it came to the students and citizens left in Ukraine. The embassy has no note on its website about evacuation protocols. Instead, there is the portrait of the President of Turkmenistan smiling, accompanied by the note: “Turkmenistan's neutrality, friendly, constructive and respectful relations with all the states, cooperation established with the UN and its specialized agencies, participation in the work of other respected organizations create favorable opportunities for our country to participate more efficiently in the resolution of the most significant problems of the modern world.”

The lack of information forced some Turkmen students to find their own solutions, with many relying on social media. Students began to exchange news and information through chats on Telegram, WhatsApp, FaceBook, and Instagram.

While Turkmenistan's diplomats were waiting for the order from their bosses in Ashgabat, Turkmenistan's capital, their counterparts from the neighboring Central Asian countries, such as Uzbekistan, acted immediately, announcing evacuations and resources.

So far, the government of Turkmenistan has not issued any official statements on Russia's aggression in Ukraine. In addition, the Embassy of Turkmenistan in Kyiv, while still officially operating, stopped answering phone calls after the third day of the war in Ukraine.

The nation's state-run media do not cover the war in Ukraine at all. People usually watch Russia's TV programs via satellite dishes and consume Russian propaganda, as most other outlets are blocked.

On March 5 and 6, 2022, students from Turkmenistan who studied at Nikolaev universities were evacuated from the city of Nikolaev through the city of Odessa to the border with Romania.

The first announcement on this Twitter account appeared on February 28, urging the citizens to follow the instructions and messages of the local authorities of Ukraine to ensure their safety and to comply with the rules of the curfew. It listed contacts to get evacuation information and informed citizens that the Embassy is still fully operational.

Another tweet appeared on March 2, stating that citizens of Turkmenistan who are in Kyiv and wish to evacuate should urgently contact the Embassy of Turkmenistan. The statement reads that most of these citizens have already crossed the Polish and Romanian borders; the rest are preparing to cross the borders very soon. The tweets on March 2  claim that the Embassy helped Turkmenistan citizens depart from the railway station in Kyiv in the direction of the western regions of Ukraine.

While there is not yet any data about how many people have been evacuated, the account only has 72 followers and is likely only reaching a few people, since the information is not published on any official government website.

Evacuation to the unknown: The story of Samir and his relatives

Samir, 28, a citizen of Turkmenistan and a permanent resident in Kyiv, decided to leave the city with his cousin's family on February 26, 2022. Samir's mother and two sisters work and live in Prague, Czechia. Therefore, he wanted to join his family by crossing the border of Ukraine and Romania to reach Czechia. After calling the Embassy of Turkmenistan in Kyiv and getting no help from the office, he decided to act. Earlier, Samir's sister called the Embassy of Turkmenistan in Romania to get information about Turkmen citizens crossing the border. The consul in Romania informed her that once Turkmen citizens enter Romania, they will get their passports stamped and registered with the local “foreign police.” The consul said they would be staying in the country indefinitely and applying for visas to stay in Romania until the situation improves. He added that they should contact the Turkmen embassy to be registered once they arrive.

After a long drive through miles of packed traffic, they finally crossed the border. But when they called the Embassy of Turkmenistan in Romania, they received a different answer: they are only allowed to stay in the country for 5–10 days and are “strongly recommended” to leave for Turkey where they can get help from the local Turkmens. With no resources or support in Romania, they trusted the embassy and left the country.

However, the lawyers and NGO officials they have since contacted say that Turkmen citizens can apply for a visa once they enter Romania, meaning they did not actually need to leave. Moreover, there is a new clause stating that students studying in Ukraine can easily apply to local Romanian universities to continue their studies.

According to Turkmennews, two weeks before the outbreak of hostilities in Ukraine, some Turkmen residents in Kyiv called the Embassy of Turkmenistan and asked if there would be an evacuation of students and compatriots if war broke out. “Bombs don't fall!” was the answer from the officials.

So what lies behind this apparent apathy and slow reaction to the war in Ukraine? Turkmenistan gained its independence from the Soviet Union in October 1991. The Constitution of Turkmenistan states that it is a democratic, legal and secular state, and the government takes the form of a presidential republic. It pursues the status of neutrality in its foreign policy, which was approved by the General Assembly of the United Nations on December 12, 1995.

However, despite those statements on paper, the people of Turkmenistan live under an authoritarian regime. Local media is severely controlled and censored and access to social media platforms is restricted, expensive and thus made inaccessible for the majority of people. Similarly, limitations and censorship apply to the educational system.

Overall this explains why so many Turkmen students, who have few opportunities to study in their country and who still speak and understand Russian, Russophone countries are an ideal choice to start their studies. For example, the number of Turkmen students in the Russian Federation is 30.6 thousand. The admission quotas in Turkmenistan are less than 10 percent of the number of graduates of the secondary schools willing to get higher education. Admission bribing is another obstacle for the young people in the country. There are 21 higher educational institutions in Turkmenistan. The country's universities accept about 8,000 students annually. The total population of the country is estimated at around six million.

Ukraine is one of the popular locations Turkmen youth choose for study alongside Belarus, the Russian Federation, Uzbekistan, Kazakhstan, Tajikistan. Fewer go to Western countries because of difficulties in obtaining visas and the high cost of living and education in the West. It is hard to get information about the number of students studying abroad as the Turkmen government officials are reluctant to provide any statistics to the public. The Hindustan Times writes that Turkmenistan is among the top 10 countries of origin of international students in Ukraine alongside India, Morocco, Azerbaijan, Nigeria, China, Turkey, Israel, and Uzbekistan. Some sources claim there could be as many as 6,000 Turkmen students in Ukraine.