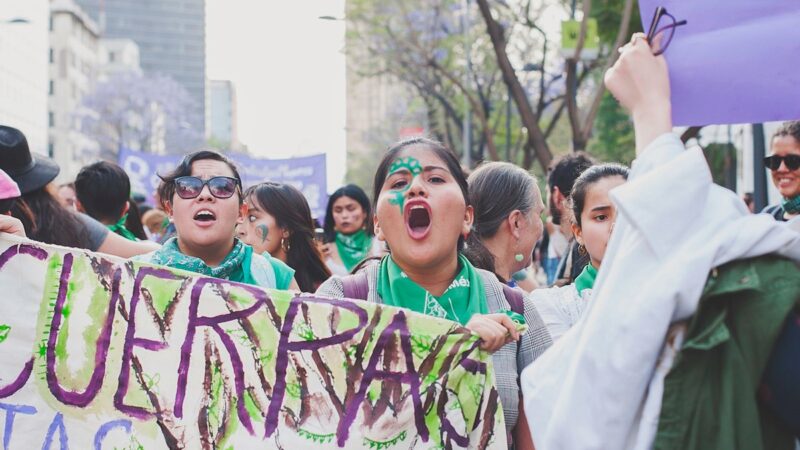 In Mexico, International Women's Day on March 8 attracts the attention of tens of thousands of people. The violence experienced in Mexico is systematic, with more than 30,000 Mexicans losing their lives through violence in 2021 alone. Many victims are women. Cases of femicide increased by 137 percent between 2015 and 2020, and seven in every ten girls and women over the age of 15 have suffered gender-based violence according to the National Autonomous University of Mexico (UNAM).

A Mexican feminist activist, whose testimony demonstrates the delicate situation faced by women in Mexico, tells Global Voices about her daily life as a women's rights activist. For safety reasons, her name will be replaced with her official pseudonym “Hormiguita” (Little Ant). She lives on the outskirts of Mexico City.

Hormiguita has been an active feminist since 2020. “It all started during the pandemic,” she explains. “The morras decided to take action.” Morras, a Mexican slang word for young women, is used in this context to describe young women who are active in the feminist movement.

For Hormiguita, “love amongst women is revolutionary, it is resistance, and it is giving yourself the opportunity to live each day with a different perspective.”

Her first demonstration was in front of the Bellas Artes Palace, in the center of the capital. However, she explains that the streetsellers were not happy. “We were physically and verbally assaulted, and so we no longer go back to that dangerous area in order to avoid any more conflict.”

Mexican feminists condemn the incompetence and inaction of the Mexican government over questions of gender-based violence and the excessive bureaucracy involved in reporting a case, which displays the government's lack of concern for the problem. Only 4 percent of femicide cases make it to trial, and this high rate of impunity is one of the main issues feminists are protesting.

Hormiguita explains that the feminist marches have a complex planning system, which can be seen in the size of the marches in Mexico, as they can reach up to 20,000 protesters.

“Later on I realized that the collectives were organized by an assembly and a united front. The assemblies gathered more than 10 or 15 collectives, and, furthermore, we could count on huge support networks that helped unite feminist groups from states throughout Mexico.” Hormiguita says that people usually perceive feminists to be divided and that there are frequent disagreements within the movement, but she affirms that they “always aim to take care of each other.”

In 2020, feminist protestors painted messages opposing gender-based violence, in red, on the door of the National Palace, which serves as the office for the federal government led by the leftwing Andrés Manuel López Obrador (AMLO). The following year, protestors turned the fencing, which had been erected to protect the walls of the palace, into a memorial for all the victims of femicide. This year, the government has fenced off the palace again.

There are also protests in other parts of the country. In Guerrero, a state in the south of Mexico, Félix Salgado Macedonia, an accused rapist, was a candidate for governor. Morena, the political party in power, openly supported Salgado Macedonia. In February 2021, feminists demonstrated outside the Electoral State Court of Guerrero, opposing its cooperation in the candidacy of the politician: “If there is no rebuttal, there will be revolution,” they chanted. A few months later AMLO traveled to that same state, where illegal trafficking and prostitution of young girls was happening. He downplayed the issue saying that it was “the exception, not the rule” and insisting that “there are many cultural, moral and spiritual values in those communities.”

Hormiguita explained the reason she prefers not to give her official name: “I publicly reported [a figure of authority] from my secondary school after I had left, and I noticed that many girls were suffering what I had suffered at that same secondary school. Then, academic figures of authority, teachers, and students started to threaten and harass me. I was singled out and blamed because reporting any fault in the system sets everyone against you.”

This experience drove Hormiguita to become a well-known feminist in her area. “This situation was the straw that broke the camel's back, because the girls [from the neighborhood] started to send me messages to ask for help with safe abortions [abortion is only legal in Mexico in specific circumstances], to report an abuser, or to ask for advice. Then, I received threats from the abusers of those same girls, and I also faced my own abuser, and the people from my inner circle defended him.”

But the threats got worse and worse. “They sent me messages and even called me on the phone, and told me ‘we're going to rape you’, ‘we're going to make you disappear’, ‘we know where you live’, quoting my address.” Hormiguita has also expressed how her associates and she felt they were being monitored by state officials and police.

Hormiguita tells us about the main focus of the feminist demands for 2022: “For this 8M, we are organizing a peaceful protest, and we are also checking the possibility of starting a discussion table to demand legal abortion in Mexico.”

Despite the difficulties and threats, she feels supported by her community of activists. “I feel sisterhood within feminism, because we help each other, my daily bread is helping girls to report cases of rape and accompanying families in court for cases of femicide; what I am doing now is not for me, it's for future generations.”