How the ‘two Myanmars’ view the Russian invasion of Ukraine

The split mirrors the nation's military and political differences 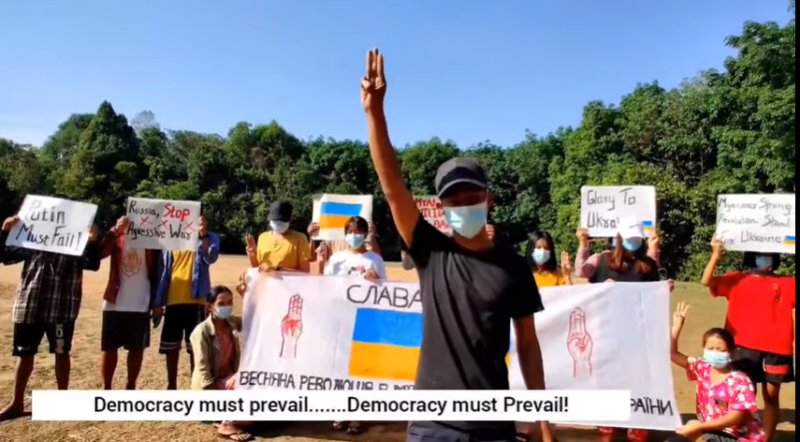 A member of Democracy Movement Strike Committee in Dawei, Myanmar declaring solidarity with Ukraine. Screenshot from the YouTube video of Tachileik News Agency.

The Myanmar military government which grabbed power in February 2021 has supported the Russian invasion of Ukraine. Meanwhile, the National Unity Government (NUG) voted ‘yes’ to the United Nations resolution condemning the actions of Russia. NUG represents the former ruling party and political forces opposed to the junta.

The junta spokesman Major General Zaw Min Tun has told the Voice of America radio network that the regime is supporting Russia.

Number one is that Russia has worked to consolidate its sovereignty. I think this is the right thing to do. Number two is to show the world that Russia is a world power.

Russia and the junta have had something of a special relationship. After the coup in 2020, Russia was one of the only nations in the world that continued to do business with the junta despite global public outcry. In addition, more than 7,000 Myanmar military officers have received army training and university scholarships in Russia.

In an article published in the Burmese-language junta mouthpiece Myanma Alin on February  27, 2022, a writer using the pseudonym “Myint Myat” praised Russian President Vladimir Putin as a leader of vision. The writer cited the situation in Ukraine to criticize the deposed government of Myanmar and its leader Aung San Suu Kyi, who remains in detention after her arrest during the coup.

In contrast to the position of the junta, the NUG has released a statement expressing solidarity with the people of Ukraine.

We strongly condemn the unprovoked attack on Ukraine that undermines the UN charter and international law. We pray for the people of Ukraine as they face catastrophic suffering from this unjustified invasion.

Myanmar's NUG even co-sponsored the draft UN resolution condemning Russia. Speaking at the emergency special session of the UN General Assembly on the situation in Ukraine on March 2, Ambassador Kyaw Moe Tun explained their position.

Myanmar understand and share more than others the suffering that the people of Ukraine are encountering. The people of Myanmar are facing similar suffering resulted from the inhumane acts, atrocities, crimes against humanity committed by the Myanmar military.

Myanmar stands in solidarity with the people of Ukraine. In doing so, Myanmar cosponsored the draft resolution and will vote YES.

The NUG failed to mention that Ukraine also supplied the junta with military equipment over the past year.

Independent news website Mizzima noted that the difference in the statements of the junta and NUG reflects the raging political conflict in Myanmar.

The two very different approaches were a reflection of Myanmar’s split political and diplomatic status.

In one corner, the illegal Myanmar junta seeks to retain strong ties with Moscow due to their diplomatic and material support in form of fighter jets and helicopters.

In the other corner, the representative of the National Unity Government (NUG) Kyaw Moe Tun seeks to run with the pack and their Western backers – hence the “Yes” vote to rap the actions of Putin.

Aside from the NUG, activists and anti-junta groups have mobilized protests against the Russian invasion of Ukraine.

Myanmar's revolution stands with you.

We know our countries r facing unique hostile situations.Yet, facing evil dictators like Putin, #Myanmar can help exchange one or two since their tactics r almost the same.

As the dictators unite and support each other, we must find a common solution to solve this common cause of problem in the world.

Meanwhile, the Russian Embassy in Myanmar is regularly posting updates about the situation in Ukraine and insists that local news reports describing the Russian action as an invasion are “biased.” “misleading,” and based on “inadequate information.”

The Progressive Voice, a pro-democracy news portal, said that the support given to Ukraine by many governments and global institutions should be extended as well to Myanmar’s resistance against the junta.

The situation in Ukraine has shown that the international community can act swiftly and in a largely united way, punish Russia for its violent actions. It is essential that Myanmar’s democratic resistance receives the same support and solidarity that Ukraine is currently receiving. The Spring Revolution will be won by the people. But, concrete, material support and punitive measures including oil and gas sanctions can further weaken the Myanmar military that is already stretched, under-resourced, and facing a determined and resolute resistance. Such timely coordinated actions from the international community, just like Ukraine is receiving, is the only piece missing that is needed for a final push that will fell the Myanmar military once and for all.