Why Uyghurs are envious of Ukrainians

China continues to 'hide the genocide of the Uyghur people' 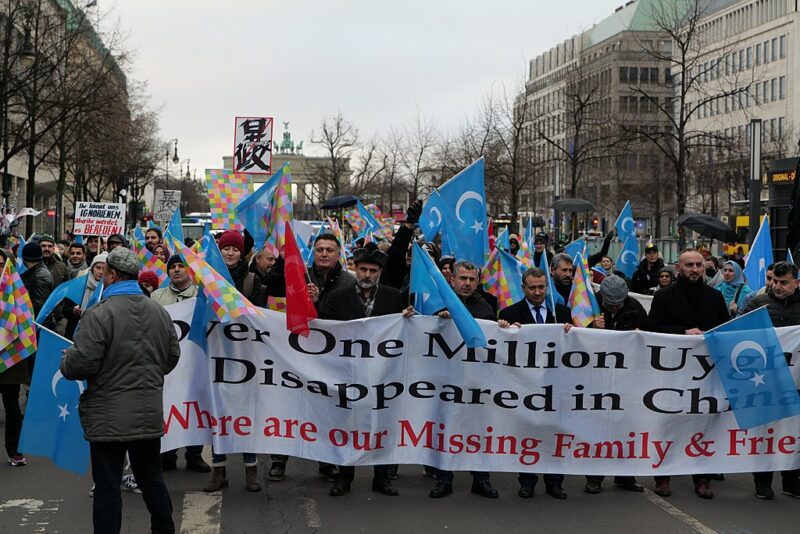 Demonstration for the rights of the Uyghur people, January 19, 2020 in Berlin, Germany.
Photo by Leonhard Lenz, CC0, via Wikimedia Commons

Today, the whole world is in mourning, sympathizing with the Ukrainian people, who are dealing with a war started by an enemy many times more powerful than theirs — and praying to God that a similar fate should not befall them.

But there are other people in the world who are watching the situation in Ukraine with interest and who are, in fact, a little envious, strange as it sounds, of what the Ukrainians are experiencing. These people are quietly praying, “God, could you give us an opportunity like the Ukrainians?”

Who are these people? They are the Uyghurs of East Turkestan (“Xinjiang,” to China) who have been facing genocide by China for many years.

There are some reasons the Uyghurs admire the Ukrainians. Last week, the Ukrainian president, Volodymyr Zelenskyy, took to the media and declared his courage and loyalty to his people. He also told fellow leaders on a conference call, “This might be the last time you see me alive.” Last year, Uyghur leaders, Shirzat Bawdun and Sattar Sawut, accused of carrying out “separatist” activities openly took to the media and cried, “I have repented, I have made a mistake.” The difference between these people is not the level of patriotism or personality, but the political status (destiny) of the two peoples they belong to. One region has already been invaded, while the other is currently going through an invasion. The one is speaking under the threat of tanks, the other suffering torture.

Today, Ukrainians from seven to 70 years of age are loudly declaring their positions, saying, “I am against the occupation,” firing on their enemies, expressing their hatred, displaying their anger, and healing their wounded spirits. In East Turkestan, however, the Uyghurs are forced to thank China, which occupies their homeland and whose government has violated their rights and plundered their wealth. Those who do not display thankfulness to China are jailed on suspicion of separatism, terrorism, and extremism.

As of March 6, over one million people have fled from Ukraine to save their lives and seek assistance from neighboring countries, while Uyghurs are barred from moving from one neighborhood to another without permission. Over the past 10 years, Uyghurs who have tried to violate the ban — fleeing without a passport or with a fake passport — and cross the border into Cambodia, Vietnam, Egypt, Tajikistan, Kazakhstan, Dubai, Saudi Arabia, and other countries, have been deported to China by these countries. A few lucky Uyghurs and Kazakh refugees fleeing Ukraine have found safety in Poland.

On March 4 the UN human rights office said it had confirmed that 331 civilians had been killed and 675 injured in Ukraine since Russia's invasion began on February 24. While shocking, their deaths were quick. In contrast, more than three million Uyghurs have been dying slow deaths in prisons and camps for five years. Erkin Sidick, scientist and president of the Uyghur Projects Foundation has asked, having drawn conclusions from official data, “Where did the 8.3 million Uyghurs go in 2–3 years?”

According to Uyghur activists, more than 500 corpses are delivered to their homes every day from the camps, but only God and Chinese officials know the true total number of dead so far. Nobody knows when the “process” of genocide will be completed. It is understandable, then, that the Uyghurs consider the bloody deaths of the Ukrainians to be sweet and easy.

What Uyghurs find most interesting about the Ukrainian situation, however, is the international attention on it. If a Ukrainian loses their life as a result of this war, the media reports it. However, the horrific situation of the Uyghurs attracts little world attention. For example, when 150 people died in one of the 380 camps in the Uyghur region, no one except the RFA Uyghur service in the US was willing or able to report it.

On February 28, 27 European countries, with which Ukrainians feel they can culturally identify, issued a statement in support of the Ukrainians and imposed sanctions on Russia. But the Muslim world, to which the Uyghurs belong, has voted with China on the issue of Uyghurs at the UN. The UN Secretary-General António Guterres condemned Russia on the second day of the war and called for an end to the invasion, but it has taken five years since the exposure of the Uyghur genocide for him to call on China to permit an investigation into the Uyghur situation. The UN has also not yet labeled the situation genocide, despite eight Western countries and an independent tribunal characterizing it as such.

Even though the support is not enough, and sanctions are not enough of a deterrent, at least the world is speaking up for Ukrainians and blaming Russia. In the Uyghur case, the world awarded China the Winter Olympics while the Uyghur genocide was taking place.

By the time this article is published, the whole of Ukraine may have fallen into Russia's hands, but Uyghurs still envy Ukrainians, because Ukrainians have the ability to determine who and when they marry, while Uyghur women are forced to marry the Han Chinese who occupied the country, and their children (around 500,000) are taken to orphanages in inner China far from their homeland.

Today, Russia has invited a Ukrainian delegation to Belarus to discuss the situation, urging Zelenskyy to accept Russian rule. Similarly, 73 years ago, Mao Zedong invited leaders of the East Turkestan Republic, such as Ehmetjan Qasim, to discuss the future relationship of the two peoples. The Uyghur leaders accepted the invitation with the “support” of Stalin, but they died in a plane crash in Russian airspace.

These are not the only factors contributing to the Uyghurs’ interest in and envy towards the Ukrainians; China’s enthusiasm for the Russian–Ukrainian war is another one. And because this war is a big distraction for the world, and gives China a golden opportunity to hide the Uyghur genocide for five to 10 more years, it is thus stepping closely to its final goal of eradicating the Uyghurs from the earth.

If the Uyghurs in East Turkistan ever got a chance to say something to the Ukrainians, it would surely be something like, “Lucky Ukrainians! Even if half of you are killed, don’t give up the fight. Otherwise, all of you will face death, like us.”

Freedom of Speech  1 week ago
END_OF_DOCUMENT_TOKEN_TO_BE_REPLACED