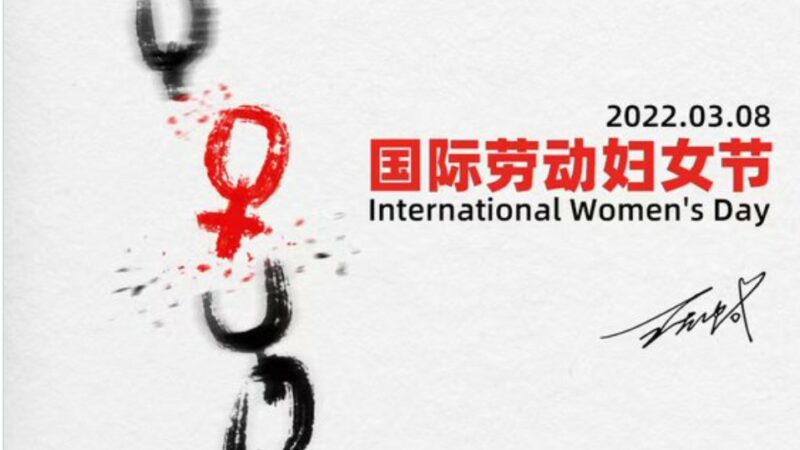 A poster for the 2022 International women's day. via Twitter user @m_wo8y

On International Women’s Day, some Chinese netizens are turning to Weibo to celebrate, sharing hashtags such as #Women’sDay (#妇女节#) to highlight women’s contribution to society. But others are also using the holiday to draw attention to gender discrimination in China and calling to break the chains (铁链) of oppression and to free chained women (铁链女).

Is the chained woman free today?

On March 8, I only wish that all women are safe. In a place where women are still chained and caged, the women’s day celebration is meaningless.

The phrase “chained woman” is associated with the Xuzhou chained woman incident, which came to light in January 2022 and triggered a public outcry. The video that caused the incident showed Yang, a wife and a mother of eight children, dog-chained to a wall in a small hut. It was originally intended to promote the local authorities’ poverty relief efforts as Yang’s husband, Dong was a beneficiary of the program, however, viewers were most focused on the apparent abuse occurring in the background of the clip. The village is located in Feng County, Xuzhou city in Jiangsu province.

Some netizens questioned whether Yang was kidnapped but the Feng County propaganda authority quickly dismissed the human trafficking concerns, claiming that Yang, who was mentally ill, was legally married to her husband Dong. Two days later, the local authorities further explained that Yang was a beggar and taken in by Dong’s family in 1998.

Then one week later on February 7, the Xuzhou party committee stepped in and revealed that Yang originally came from Fugong County in Yunnan. On February 10, the authorities finally admitted that Yang was a victim of human trafficking and had been sold to Dong’s family. Three individuals were arrested.

Some Chinese netizens claim there is systematic human trafficking in Xuzhou city, and say government officials and police authorities should be held responsible for the incident. According to the Xuzhou city government record, the city authorities saved some 12,000 kidnapped women and 5,400 children in 2000.

On February 17, Jiangsu province party committee stepped in and revealed that Yang is actually 52-year-old Xiao Huamei. Six individuals were detained and eight county-level party officials were fired. However, some still doubt whether Xiao Huamei is the genuine identity of the chained woman and believe there are two women victims involved.

There are strikingly different facial complexions between Xiao and the chained woman, plus Dong’s eight children were born in 1999, 2011, 2012, 2014, 2016, 2017, 2018 and 2020 respectively. While the authorities claimed that Yang/Xiao is the eight children’s biological mother, there is no explanation for the 12 year age gap between the first and second child.

A few citizens have attempted to reach out to Yang, but they had been detained and harassed by local authorities.

This latest scandal is just the tip of the iceberg regarding gender abuse issues in China. Another incident, known as the caged-woman incident, came to light on March 1 2022. A social media post exposed that Li Shiming, a popular video blogger with 100,000 followers, had kidnapped a woman, Xiao Yu, and kept her imprisoned in his home since 2009. Allegedly, Li illegally sold their female offspring and kept Xiao Yu in a cage. The incident is still under investigation.

In response to the public outrage, on March 2 the public security authority vowed it would implement a year-long crackdown on human trafficking.

“We are all chained women”

After two months of online calls for public investigation, the image of the chained woman has become a symbol of women’s oppression in China.

Urge mainland Chinese netizens to change profile images into the chained woman on #March 8 Chain Festival. Even if we can't change the reality, we can express our stand by not forgetting.

However, the Chinese censors stopped the coordinated campaign through various domestic social media platforms including Weibo and WeChat. Others took to Twitter to continue the campaign, with some artists creating feminist posters for the holiday:

A number of Chinese netizens hold a placard that says “If the truth of Feng county does not come out. All we have is a shameful festival on March 8.” This one is posted by Li Qing from Hanzhou:

The Asian Woman Refugee Collective organized a virtual poetry sharing session on March 8 through Twitter, titled “We are all chained women.” Many users posted images and hashtags related to the Chained woman to mark the day:

I am not free while any woman is unfree, even when her shackles are very different from my own. — Audre Lorde

An art team has written a song called Dust (塵) for chained women in China:

Here are the translated lyrics:

If people live in the world,

Not free to live

Not free to die

Look at that wall day after day

Can remember every texture

Screams from the bottom of my heart

Calling for the only light in that small window

But the night always comes

I saw the sun

Sludge climbed up the courtyard wall

Black clouds hang on the roof

And into the inhuman life

I long for a new life