Sanjib Chaudhary shares strategies he has found useful on his journey 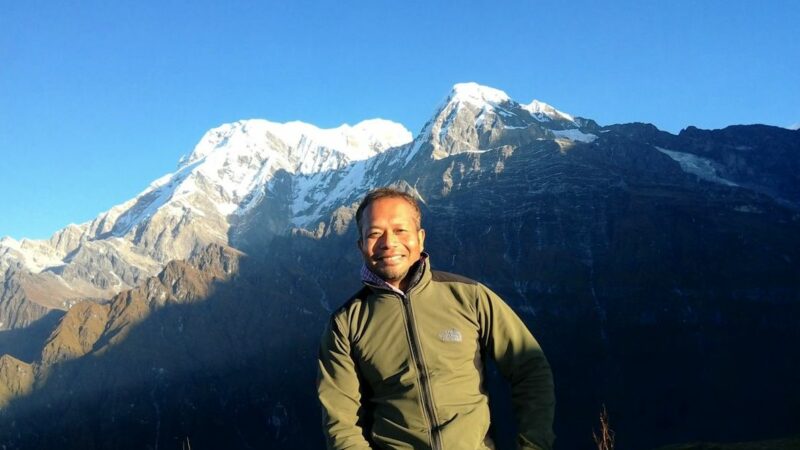 This article by Tom Robertson was first published in The Record (Nepal); an edited version is republished below as part of a content-sharing agreement with Global Voices.

There are few people with whom I enjoy speaking about the craft of writing more than Nepali writer Sanjib Chaudhary. I love analyzing the “nuts and bolts” of article construction with him – how to open articles, how to engage readers, how to make words sing, and especially, how to assemble arguments. His sharp eye and enthusiasm for detailed analysis make him an excellent ambassador for writing, always interested in helping others improve their work.

In his recent article, Writing Journey, shared below, Sanjibji describes how he grew from a kid who read only the sports and humour pages into, first, an advertisement writer, then a blogger, and more recently, a magazine writer, often with an interest in celebrating Nepal’s many cultural traditions, particularly from the Tarai. He also writes fiction.

Sanjibji didn’t start his career thinking he’d do a lot of writing; his love for learning new things through interviews and other research — and his skill with words and storytelling — is what pulled him in that direction.

Another thing that struck me about Sanjib’s journey is what a joy it is to learn about the world around us. Consider the topics that he has shared, through his writing: orchids, Tharu art, sidhara, Rufous-necked hornbills, Patan's Laxmi Narayan statue, Nepal’s gay pride parade, Kashmir’s pain, Tamang sacred seeds, Thapathali to Teku, fishing cats, women football stars, and now in his fiction, goats and cows. I could easily have made this list twice as long.

Sanjibji generously shares strategies he has found useful on his journey. His tips are all good but one, in particular, is worth spotlighting: character development. Readers remember strong characters, he explains. To me, character development is something that fiction writers pay a lot of attention to, but that nonfiction writers, even academic writers, can and should be thinking about, too. Developing characters — by adding a few well-chosen pieces of info — can make writing not just more interesting and memorable but also more complete, more textured, and more insightful. It seems it’s one of a hundred ways that nonfiction writers can learn from the storytelling techniques of other writers.

Thanks, Sanjibji, for sharing your enthusiasm and insights about writing.

Chaudhary’s articles have appeared in Global Voices, The Record, The Kathmandu Post, The Wire, and The World, among others. He blogs at Voice of Tharus and also translates children’s storybooks for Storyweaver. Recently, he has started writing short stories. His story “The Goats and the Cow” was published in “A Glimpse Into My Country: An Anthology of International Short Stories.” Other writings include The ruins of Sen palace and temple in Saptari district of Nepal and A conversation with Gyani Maiya Sen, one of the last speakers of a dying Nepali language. 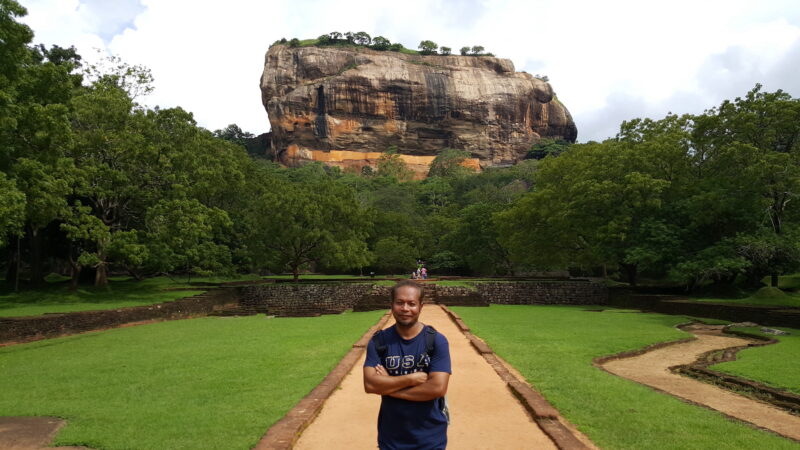 At Sigiriya in Sri Lanka for the Global Voices Summit in 2017. Image by Sanjib Chaudhary, used with permission.

“My writing journey” by Sanjib Chaudhary

I was born in the Saptari district but went to school in Kathmandu. I completed my bachelor's degree from Jaipur in Rajasthan and my Master's degree from New Delhi, India. Growing up in different places and amidst different cultures broadened my perspectives.

During the late '80s, when I was in grade 6, the class teacher asked us to write an essay about radio. While all my classmates started with the physical description of the radio, I began with the screeching sound of the radio knob turning, followed by sounds of different radio stations, jumping from news to popular songs. The teacher found my writing to be completely different and he loved it. This instilled confidence in me that I could write.

I was always surrounded by newspapers and magazines my daddy brought home: Reader’s Digest, Parade, The Sun, Science Reporter, Wisdom, and The Rising Nepal. I always started from the sports and humor pages. Then, there were Nepali translations of Russian literature, such as the works of Anton Chekhov, Leo Tolstoy, Maxim Gorky, Mikhail Sholokhov, and children’s pictorial storybooks translated from Russian that I got from my friends. In our home, we also had novels from Indian writers like Premchand, Sharat Chandra Chattopadhyay, Gulshan Nanda, and Ved Prakash Sharma. I devoured them all. 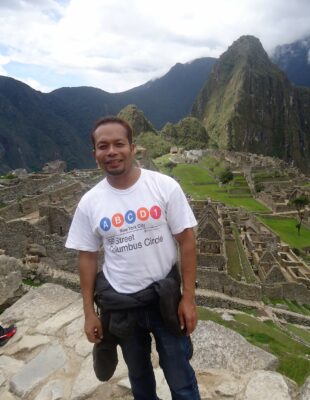 At Machu Pichu in Peru in 2014. Image by Sanjib Chaudhary, used with permission.

I would never miss the crossword puzzle that appeared every Friday in The Rising Nepal. I remember publishing my first article in the early '90s in the Sunday Dispatch, a  weekly newspaper published by Gorkhapatra Sansthan. Though it was a short article, seeing my write-up in print encouraged me to continue writing. In college, I never hesitated to submit my articles to magazines. My friends too would look to me to design posters for the college’s annual functions.

I started writing advertising copy in 2004 and was nominated for the best copywriter for two advertisements at the Advertising Association of Nepal’s annual Crity Awards (advertising award ceremony). Though I did not win, it was a big recognition for my writing. Since 2006, I have interviewed and written stories of many community members from the hills and Tarai. Some of the stories were able to raise more funds for the communities we worked with.

I was not sure that I would do a lot of writing in my career. But I got into the habit of writing soon after I started getting feedback on my blogs.

I took to blogging in 2006. I was free to write on any issue: corporate communications, branding, knowledge management, Tharu culture, and travelogues. From 2007, I started contributing to OhMynews International, a Korea-based web platform for citizen journalists. When some of my pieces were selected as the cover story, I was encouraged to write more. Some of my stories were also picked up by other publications. Now I write and translate for Global Voices. I also translate children’s storybooks for Storyweaver.

Before writing an article, I read and research a lot. Reading broadens your perspective. Reading also helps get rid of any subconscious bias that many of us have.

As I write for a global audience that might not have any idea about Nepal, I make sure to provide enough context in my writings. For instance, we all know Kathmandu is Nepal’s capital but writing it as “Kathmandu, Nepal’s capital city” helps readers. Foreign readers generally aren’t aware of the simple equipment we use or about our cultures and traditions. We need to explain them. For example, while talking about doko, I add the words “wicker basket” and a picture to make it clear, as in this article.

I try to make the opening of an article interesting. A good opening helps engage readers. I also spend substantial time crafting an article’s closing. If possible, I connect the closing with the opening.

At the moment, here is something I am working on: I am trying to better characterize the protagonists and antagonists in my articles and stories. Strong characters play a vital role in the success of a story. Readers empathize with the characters and remember the stories better. 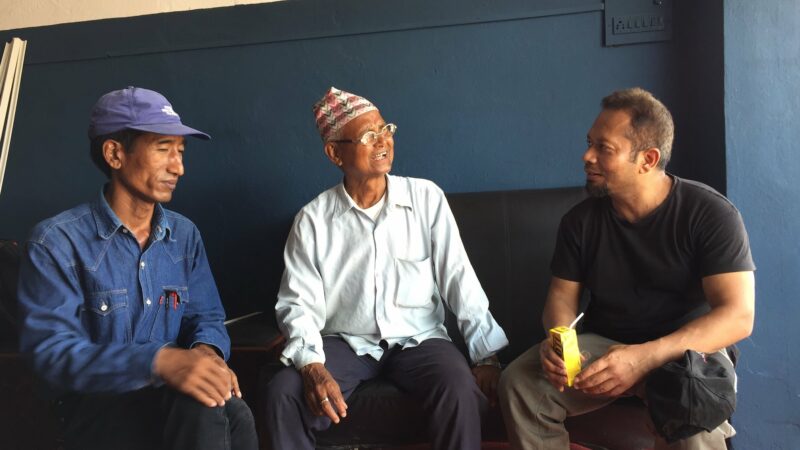 To keep the creative juices flowing, I take challenges like “One Minute Briefs.” I don’t have a fixed schedule for writing. I get ideas before going to bed. Interesting ideas occur while I’m in the washroom. Sometimes, I wake up in the middle of a dream to jot down details. Going for a solo walk also helps me juggle ideas and think about new topics to write on.

I always revise an article before submitting it to editors. I cut out jargon and verbosity. To proofread, I don’t just read on the computer screen. I print out the article. Reading it aloud alerts me to mistakes my eyes don’t see.

Above all, I like unearthing unknown facts about Nepali cultures, foods, and traditions, and sharing them with wider audiences. For example, people in Nepal’s southern plains create some interesting food combinations and they use a lot of flaxseed in curries. Because I’m connected with these communities, I feel like I can highlight the nuances that many outsiders overlook. A sidhara, a dried cake of ground dried fishes, might look like just another dish to an outsider. But for me, the process of making it is enriching and interesting. As I have seen people prepare it first-hand many times, I can write about it in detail. I love meeting with community members, interacting with them, and coaxing secrets out of them. Unearthing these unknown details motivates me to write more.