This week, explore narratives about feminism in Russia 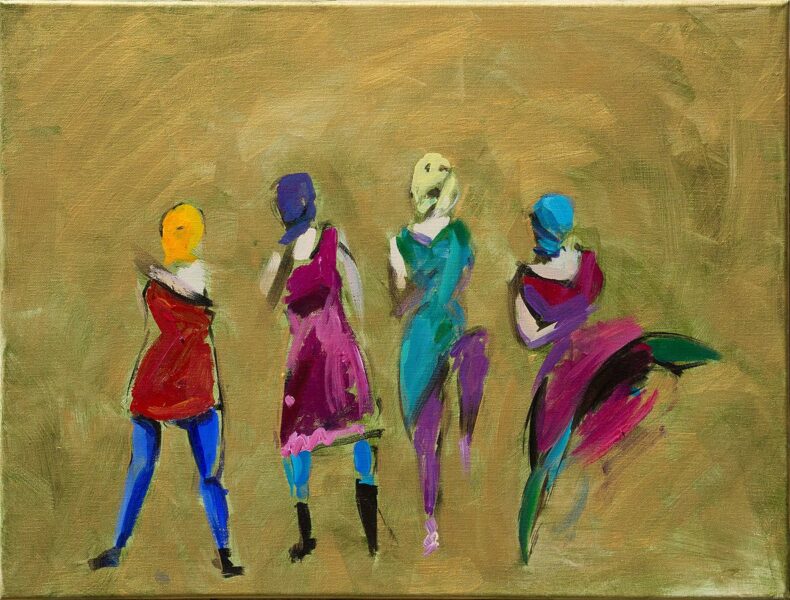 On March 8, 1917, thousands of Russian women gathered in St. Petersburg to demonstrate for food, peace and the end of tsarist rule. Four days later, after the strike morphed into a massive protest, Tsar Nicholas II abdicated.

A century later, the feminist movement has become a significant force of opposition and challenge to state repression in Russia, a country where political opposition is largely neutralized. Today, feminists in Russia and abroad are joining forces to protest Vladimir Putin’s war on Ukraine by mounting a “Feminist Anti-War Resistance” movement. Efforts include a crypto fundraiser for Ukrainians called UkraineDAO launched by Nadya Tolokonnikova, a member of the punk rock group Pussy Riot now based in the U.S. The drive raised nearly $3 million in 24 hours.

Today in Russia feminist movements are small but vibrant and have been slowly spreading in large cities through social networks. While the Russian government did not see feminism as an overt threat in past years, it has come to consider feminism a dangerous force, particularly with regard to the preservation of so-called traditional values. Today, the Kremlin lumps feminist activists together with the political opposition.

The Kremlin and conservative groups argue that women’s rights and feminist values are a Western import seeking to destroy Russia’s values and weaken the country.

At the foundation of this narrative is the idea that Russia has a fixed set of traditional values. Until recently, there was no official list of these values, but that changed in 2022.

In January of this year, the Russian Ministry of Culture proposed an official list of traditional spiritual and moral values, including “patriotism,” “service to the Fatherland” and “marriage as a union between man and woman,” along with “justice” and “humanism.” Although the Ministry’s proposal was later put on hold due to criticism, this narrative is widely used to justify limiting women’s rights, not adopting legislation against domestic violence, and introducing homophobic laws.

A week before Russia’s invasion of Ukraine, Russian senator Margarita Pavlova proposed a bill to expand the list of content that would be deemed illegal if posted on the internet and would therefore be subject to immediate blocking. According to Pavlova, the new list should include items promoting abortion, radical feminism, and the childfree movement. Criticism of Putin and Russian public officials were already on the list of prohibited content and subject to blocking without a court decision, but this latest move points to the designation of new internal enemies of the state such as “radical feminists” who are a “threat to national security.” The media outlet reporting that news, RIA Novosti, is controlled by the government and does not offer other points of view or reactions. Commentators on their website have mostly ridiculed the initiative. More analysis here. 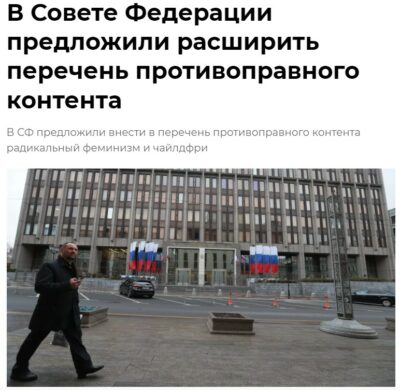 “Women are suppressed in Russia and need to fight for equality”

According to the official line, gender equality was achieved in the Soviet Union. A majority of women during the Soviet period were indeed educated and employed, but this perceived equality was supported by institutions and programs of the welfare state, such as state-sponsored childcare, and bolstered by the tradition of extended, non-nuclear families, where grandparents took care of grandchildren. Men did not generally engage in household labour, and women worked both in the workplace and at home. When the USSR collapsed, so did its social welfare structure, and women were left to do unpaid and unsupported domestic work.

Russian feminists see their country as a deeply patriarchal society in which state media and legislation promote traditional gendered roles for men and women. Today, laws to protect women from gender-based violence are non-existent, there are very few women in politics, and state-funded childcare is limited. According to national statistics, one in five women in Russia has suffered gender-based violence.

On February 8, Pussy Riot member Maria Alyokhina was arrested and detained for two weeks. Alyokhina was charged with promoting Nazi propaganda after publishing what law enforcement perceived to be Nazi symbols on her Instagram account in 2015. She told the media that the post was in fact a photo of three women wearing Muslim hair veils, embellished with Arabic letters and Hindu symbols. The police considered the latter to be swastikas.

Russian state-affiliated media do not usually report on such cases. This story was covered by Current Time, a Russian-language TV channel with an editorial office in Prague considered by the Russian state as a “foreign agent,” and supported by Radio Free Europe and Voice of America. The Current Time story suggests that Maria was arrested under false pretenses. More analysis here. 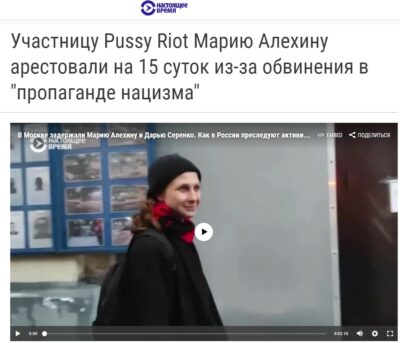 Among the thousands arrested in Russia for protesting the war these past weeks are many women. On March 4 Russia outlawed anti-war protests, but two days later thousands took to the streets again and law enforcement arrested thousands more. Antiwar activists assert that even though they are tortured and abused, they will continue protesting because their conviction is strong. Feminist groups such as ONA and the wider Feminist Anti-War Resistance have played a large role in organizing the protests.

On March 6, the Feminist Anti-War Resistance shared an audio recording of the beating and abuse of a young antiwar activist Aleksandra Kaluzhskikh (26) at the hands of the Russian police, which included threats of rape. On the recording, police officers are heard saying that Kaluzhskikh is one of “the enemies of Russia,” while she repeatedly asserts article 51 of the Russian Constitution, which absolves her of the obligation to testify against herself.

The audio and transcript were shared on the “Feminist Antiwar Resistance” Telegram channel, where it was viewed 163,000 times at the time of the analysis, before being widely distributed on Russian Twitter and opposition channels on Telegram. More analysis here. 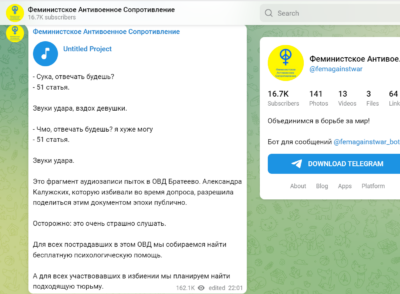 More on women’s rights in the Observatory

Pakistan: Since 2018, Pakistani women’s rights groups have organized the Aurat March (women’s demonstration on March 8) across the country to support their assertion that “Women rights need public attention” and that women’s lives must stop being relegated to the domestic, private sphere. The increasing popularity of the demonstration, however, has been met with hostility from right-wing and religious groups, who claim that “feminists are fostering western values and promoting un-Islamic ideas.” This year’s Aurat March took place under the banners #AsalInsaf (call for justice) and #ReimaginingJustice.

India: Despite the fact that Muslim women fight vocally for their rights, right-wing media houses paint them as disempowered and oppressed. Wearing the hijab is a particular point of tension and feeds into the overarching Hindutva rhetoric about Islam oppressing women while Hinduism respects and uplifts them. In this context, the narrative most present in the media is “Muslim women should be rescued from the oppressiveness of Islam.” News of women protesting for their rights is covered by left-leaning media along with the narrative that “Women have the right to dress according to their beliefs.”

Bangladesh: Male Islamic commentators – including those perceived to be moderate, such as Mizanur Rahman Azhari – argue that “Women should be guided by the principles Islam has prescribed.” According to this narrative, which is shared primarily on anonymous YouTube channels, women and girls should receive only Islamic education and be protected from forces such as “progressive” secular education, seeking work outside of the home, and participating in public life and in social media.

Afghanistan: While Afghanistan’s Taliban leadership strives to persuade the world to recognize them, Taliban fighters and militants violently silence those who oppose them, especially women, and promote narratives such as “Women who protest in Afghanistan have been corrupted by exposure to western values.” Women rights’ advocates, meanwhile, argue that “The Taliban are afraid of Afghanistan's women”. See more in last week’s newsletter: Taliban narratives about Afghan women.

Global Voices’ newsroom and researchers are working around the clock to deliver stories with distinctive angles and analyses about the Ukraine war and its narratives. See our special coverage here. 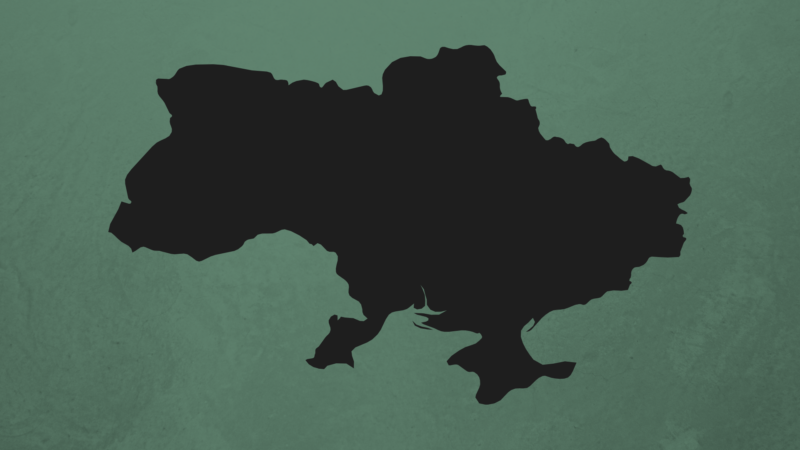 Next week: More on Russia-Ukraine narratives

Civic Media Observatory researchers are decoding narratives about Russia’s Ukraine invasion. For example, researchers are closely following how Hindutva groups in India are showing support to Putin, claiming that his aspirations for the new USSR are similar to their ambitions of a “United India”, which includes taking territories from Pakistan and China. This is an ongoing investigation – see next week’s newsletter for more.