A selection of Latin American feminist anthems and songs 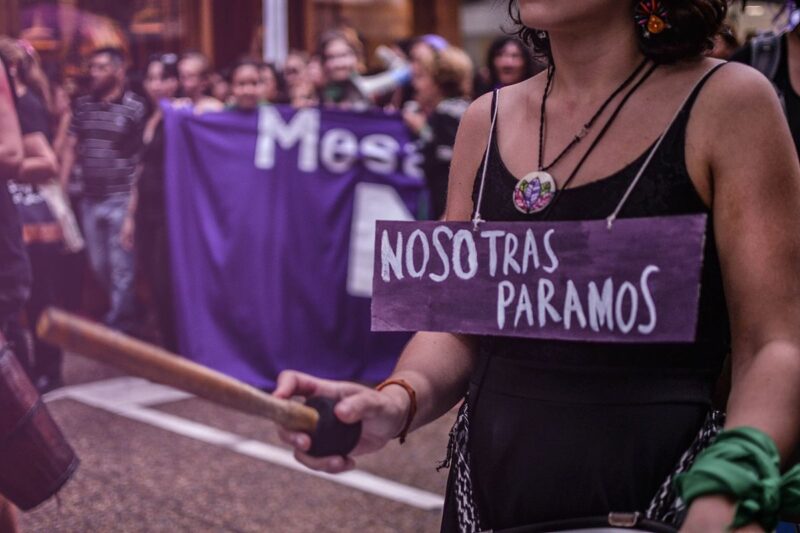 The massive demonstrations and protests held on International Women's Day across Latin America each year would not be complete without the feminist songs that are an integral part of these demonstrations. They provide the soundtrack as women demand more safety and decision-making power over their lives and bodies.

Here is a selection of famous feminist anthems as well as other songs that reimagine the world on women's terms.

Vivir Quintana is a singer and songwriter from Mexico, author of “Canción sin miedo” (Fearless song), which has become a feminist hymn in Latin America often sung during protests for disappeared and murdered women and girls. The song was commissioned by Chilean artist Mon Laferte for a concert for Women’s Rights Day in 2020 and sung with the chorus El Palomar. Vivir Quintana recently reproduced the song in Ayuujk, a variation of Tlahuitoltepec language from Oaxaca. Listen to this song on Spotify.

I set everything on fire, I break everything.
If one day some guy takes away the life from your eyes
Nothing shuts me up anymore, everything pours out of me
If they touch one of us, we all strike back

Un violador en tu camino (“A rapist on your path”) is a feminist protest performance made viral throughout the world at the end of 2019 and start of 2020. The song and performance were created by feminist group Las Tesis from Valparaíso, Chile in 2019 in the context of Chile’s mass social uprising against rising living costs, corruption, privatization and inequality. Reports of sexual abuse on behalf of Chilean state forces abounded.

The lyrics – which have been translated and performed in at least 15 languages, including sign language – denounce how women are frequently blamed for being victims of assault as well as systemic impunity for these crimes. Listen to the performance's song on Spotify.

The performance includes the now-iconic lyrics:

Sara Curruchich is a Maya Kaqchikel singer and songwriter from Guatemala who defends women’s rights and those of Indigenous people. In the song La Siguanaba, she reimagines a famous Central American folktale and sings in Spanish and in Kaqchikel. Versions of the legend differ, but a common point throughout the region tells the story of a beautiful and supernatural woman who lures men to their death at night. Yet, Curruchich contradicts the original telling, thereby denouncing the demonization of women in society. She portrays La Siguanaba as an innocent Indigenous woman fleeing sexual abuse.

“Some fear her,” she sings, “they believe she is supernatural, but I want to tell her story,” before later saying “They call her The Siguanaba, they call her witch, they call her animal, because she fights against the patriarchal system.” Listen to this song on Spotify.

Guatemalan rapper Rebeca Lane is a feminist “artivist” who is also a sociologist and poet. After releasing several feminist songs in the past few years, her first release of 2022 is Flores Rojas (Red Flowers), a song and illustrated music video that seeks to inform girls and adolescents about menstruation. Through Flores Rojas (whose project also includes a series of mural art in public spaces with local organizations), Lane wants to share a new narrative about menstrual blood, one including positivity, love and tenderness, instead of harmful myths. Listen to this song on Spotify.

Miss Bolivia is an Argentine singer and songwriter whose music combines cumbia, hip hop, and reggaeton. Featuring J'Mena, Miss Bolivia performs “Se quema” (It's Burning), a song with a strong political messaging on a danceable rhythm. The song criticizes gender-based violence and beauty standards. Listen to this song on Spotify.

Rising Latino pop music star Yendry, a Dominican-Italian singer and songwriter, released one of her first most famous songs in 2020, “Nena.” In Nena, she takes the point of view of a mother worrying about the safety of her daughter. For some, the meaning is about the daughter leaving the mother to migrate.

The song narrates the daughter leaving home early and trying to survive predators; the mother prays over her to repel “the evil eye.” Her other songs, such as “Barrio” and “El Diablo,” question the dynamics of power within heterosexual couples. Listen to “Nena” on Spotify.

Walking down the street, she goes
With her long black hair
She lowers her gaze again
The tigers won't let her pass.