Silent and uneasy: Armenia’s response to the Russian invasion of Ukraine

For many, this silence is justified 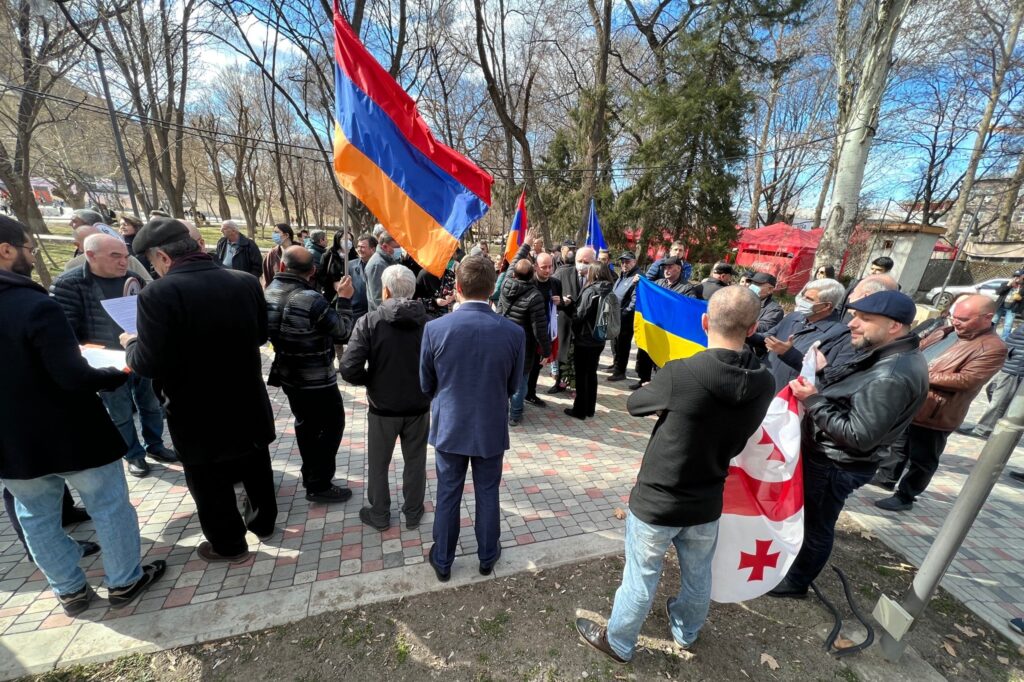 A small pro-Ukraine demonstration in Yerevan on on 27 February. Photo: Stepan Grigoryan. Used with permission.

Since Russia’s invasion of Ukraine, the world seems to be more united against Russian imperialism than ever. However, in Armenia, people have found themselves lost between deep-seated feelings of trauma and apathy, with analysts suggesting that the country suffers from a case of Stockholm syndrome, in which a captive develops positive feelings for the captor.

The recent war over Nagorno-Karabakh between Armenia and Azerbaijan, Russia’s presence and influence in Armenia, as well as Ukraine’s support of Azerbaijan during the war, have kept Armenians mostly silent on the events that unfolded following Moscow’s recognition of the independence of Donetsk and Luhansk.

For many, this silence is justified.

During the first week of the war in Ukraine, two small demonstrations were held in Armenia's capital, Yerevan, in support of Ukraine. The first, which took place in front of the Russian embassy on the day of the invasion, was organized by the European Party of Armenia, a minor party with no parliamentary members. The second, held on February 27 next to the memorial of Ukrainian poet and political figure Taras Shevchenko, was organized by the Ukrainian Embassy.

The Armenian government and its officials have remained largely mum on Russia’s actions. Its only statement so far confirmed that Yerevan did not plan on recognizing the independence of Donetsk and Luhansk, and expressed hope that Russia and Ukraine might find a “peaceful solution” to the conflict.

On the international stage, Armenia stood alone in supporting its strategic ally and main security guarantor, by voting against suspending Russia's representation in the Council of Europe. But in two more recent votes — to suspend Russia from the UN Human Rights Council and in condemning the invasion of Ukraine at the UN General Assembly — Armenia abstained.

According to Daniel Ioannisyan, a democracy watchdog based in Yerevan, the inconspicuous shift in Armenia’s position in these two cases may be seen as “major progress,” but “only in the context of Amenia’s dependence on Russia.” He continued, “Armenia is in such a sad situation regarding its sovereignty and independence from Russia that this silence is already a good thing.”

Ioannisyan is referring to Armenia’s political dependence on Russia, which includes its membership in the Russian-led Eurasian Economic Union and Collective Security Treaty Organization, the country’s main economic and security partnerships. The two countries also have a separate strategic partnership agreement that regulates the presence of Russia's military base and troops in Armenia.

This dependence on Russia grew stronger following the Second Nagorno-Karabakh War, which ended with Russian mediation and the deployment of over 2,000 Russian peacekeepers to the area. Thus, the Armenia-controlled parts of Nagorno-Karabakh appeared to be under de facto control of Russia. In addition, the number of Russian troops in Armenia reached roughly 10,000 with a permanent military base in Gyumri and a military airport in Yerevan, as well as other minor strategic positions. Russian troops are also in control of the Armenia-Turkey border.

“[Armenia has] struggled to maintain a strategic ‘balance’ between its security partnership with Russia and its interest in deepening ties with the EU and the West over the past twenty years,” Richard Giragosian, director of the Regional Studies Center, a Yerevan-based think tank, told OC Media.

However, Giragosian thinks that Russia will likely start demanding greater support and more open loyalty, in which case, “any sense of diplomatic balance may be lost, threatening to push Armenia into a vulnerable and isolated position on the wrong side of history.” He further explained, “Although Armenia’s position, as the only other country besides Russia to oppose that move [silence on sanctions], dangerously isolates it, there was little choice and even less of an alternative.”

Considering Armenia’s middling position between support and condemnation of Moscow’s actions, there’s a fear that the sanctions set for Russia may fall on (or at least influence) Armenia too — although Ioannsiyan thinks Armenia will be affected not by the sanctions themselves, but rather, by Russia’s expected attempts to use Armenia and other countries to bypass them.

“In this case,” he surmised, “there may be bad consequences for Armenia.” In a hypothesised scenario where Russia emerged the victor in the war, Ioannsiyan warned that Armenia may be forced into the process of forming the “Soviet Union 2.0.”

The response of the Armenian people has not differed much from that of its government. Journalist and pro-peace activist Aram Amirbekyan suggested that the reactions among Armenians were “logical”.

“Unfortunately, many were even happy with what was happening,” Amirbekyan said, explaining that people were justifying their apathy because of Ukraine’s support of Azerbaijan during the 2020 war. “I can’t share this kind of response,” he continued, “as [Russia’s invasion] is aggression that should be condemned — but the ‘enemy-ally’ propaganda was so strong in Armenia that a reality was created where people support Russia. Ukraine, in this context, was perceived as an enemy that sells weapons and white phosphorous to Azerbaijan, but so did Russia. Everyone sells weapons to everyone.”

One allegation surrounding Ukrainian support to Azerbaijan was that Kyiv provided Baku with white phosphorous that was used by Azerbaijan during the Second Nagorno-Karabakh War. Film director Sarik Andreasyan, a former friend of Ukrainian President Volodymyr Zelenskiy, was one of many to perpetuate such accusations, which Zelenskiy has categorically denied.

According to the Stockholm International Peace Research Institute, Russia provided over 60 percent of Azerbaijan’s weapons between 2011 and 2020, while Ukraine only sold over 1 percent during the same time (although before 2010, that number was significantly higher).

Citing a survey by the Union of Informed Citizens, Ioannsyan posited that Russian propaganda has also played a significant role in the formation of Armenian public opinion, with over 11 percent of Armenians considering Russian state media outlets trustworthy sources of information. “This, among other things, influences public opinion, and unfortunately, its support of Putin’s actions. And Armenia should work intensively against disinformation campaigns,” he added.

Coming on the heels of the Russian invasion of Ukraine, one such “campaign” was the staged draping of a 50-meter banner across one of Yerevan’s largest bridges, the Kyivian, which read, “Russian army.” Though instantly going viral with hundreds of thousands of views, local journalists established that the sign was only hung for nine minutes in order to be filmed before being taken down.

The 2018 revolution and the Second Nagorno-Karabakh War have also changed perceptions in Armenia, Amirbekyan believes. Such recent events made Armenians more “politicized,” he says, “and […] the events in Ukraine are perceived as part of these geopolitical perceptions.” This is also why Amirbekyan called Armenia’s response “logical”: “It’s hard to expect from Armenia […] explicit support for Ukraine, as Russian troops are in Karabakh as the direct guarantor of the security of the people there.”

While he says he would like to “see Armenia in such a geopolitical situation to be able to directly condemn this aggression and colonial-imperial policy,” Amirbekyan says he is “happy that it was able to keep some sort of neutrality.” He also noted, “At the same time, […] we should notice that there’s compassion in Armenia towards the people in Ukraine. After all, there are many Armenians in Ukraine; relations between the countries and people were quite warm. The sight of Kyiv or Lviv shelled is painful for Armenians too.”

According to estimates, there are almost 400,000 Armenians and people with Armenian roots in Ukraine. Officially, Armenians in Ukraine number around 130,000. Russia, on the other hand, has the largest Armenian population — 1.2 million.

Both Armenia’s Ministry of Foreign Affairs and the head of the Armenian community of Ukraine, Norik Grigorian, have said there is no exact information on how many of these Armenians living outside the country have fled the war, or how many have re-entered Armenia. However, the ministry has expressed a willingness to not only receive ethnic Armenians and Armenian citizens, but also to accept foreign refugees.

Meanwhile, the Ministry of Economy has established a group to help Armenians, Russians, Belarusians, and Ukrainians intending to move to Armenia. This includes a simplified procedure for relocating companies registered in those countries to Armenia. Minister Vahan Kerobyan confirmed that about a dozen Russian companies have already relocated to Armenia. He said that the government was trying to make the country a “pleasant environment” for foreigners who may decide to move, part of which entailed the provision of an appropriate business environment.