Russian state uses social media that are forbidden to its citizens 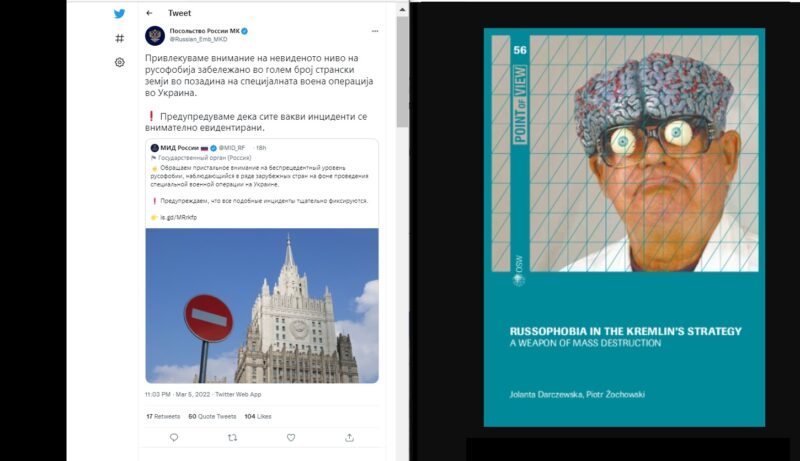 Collage of Russian embassy tweet and front page of the publication “Russophobia in the Kremlin’s strategy: A weapon of mass destruction.” Photo by Meta.mk, used with permission.

The Russian embassy in Skopje has been the only one in the Balkans region to translate and transmit the “warning” by the Ministry of Foreign Affairs of the Russian Federation (MFA) about the increased level of “Russophobia” that stresses that “all such incidents are meticulously recorded.”

Even though the state institutions of the Russian Federation limited or blocked access to social network platforms Facebook and Twitter for their citizens, the Russian MFA continues to utilize both.

“We have taken notice of an unprecedented level of Russophobia in several foreign countries in the context of the special military operation in Ukraine.

❗ We warn that all such incidents are meticulously recorded.”

One day earlier, on March 4, the Russian parliament (Duma) adopted legislation proscribing draconian sentences for “intentional spreading of fake news” about the Russian army operations, which includes sentences of up to 15 years in prison, Truthmeter.mk  reported.

The Russian parliament also adopted a range of fines for “discrediting of the armed forces of the Russian Federation (RF).” The  citizens will be held responsible for public calls demanding the prevention of the use of RF armed forces.

The new law includes specific censorship provisions regarding the activities of the Russian armed forces against Ukraine, forbidding the use of the terms “invasion” and “war,” prescribing the use of the official Kremlin terminology of “special military operation” only.

The post by the Russian embassy in Skopje incited hundreds of defiant reactions from insulted Macedonian citizens, ranging from statements of disbelief to foul language to expressions of support for the invaded Ukraine, as well as for the Russian people suffering under dictatorship.

Do you actually believe in the stuff you translate and post? I ask this in the capacity of admirer of Russian art and literature. And by the way, feel free to record me, too.

Alongside the majority of reactions that voiced outrage, several tweets by profiles that self-identify as part of the political party Levica expressed support for the Kremlin regime, including attempts to discredit journalists and gloating in regard to creation of blacklists that will lead to purges.

Threats and accusations of “Russophobia” as propaganda weapon 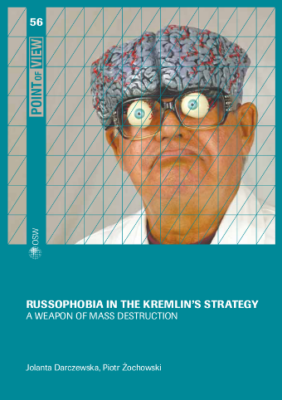 Front page of the study “Russophobia in the Kremlin’s strategy. A weapon of mass destruction” by OSW (2015). Fair use.

European analysts have been warning for years that accusations of “Russophobia” have been part of the Kremlin propaganda arsenal. For example, the study “Russophobia in the Kremlin’s strategy. A weapon of mass destruction” published by the Polish think  tank Centre for Eastern Studies (OSW) in November 2015 states:

Building up an image of Russophobic countries is currently instrumental in shaping a neo-imperial political identity among the citizens of the Russian Federation, mobilising them in the face of real or alleged threats, and also serves as a form of restoring psychological comfort to them in the face of the failure of the Kremlin’s actions (as in Ukraine, for example). The mythologised stereotype of Russophobic countries also remains a crowning argument and a simple explanation for the ongoing tensions in relations between Russia and the West.

The Russian embassy in Skopje has issued direct threats against the citizens of Republic of North Macedonia in the past.

After the Skripal case and banishment of an embassy employee for engaging in activities that go beyond the diplomatic status, the Russian ambassador Oleg Shcherbak  stated that Macedonia shouldn’t join NATO, and  that in the case of a “possible clash between Russia and NATO, Macedonia would be a legitimate target.”

At a special conference for the media held on March 29, 2018 in Skopje, Ambassador Shcherbak stated:

“By joining [NATO] the Republic of Macedonia will become part of this military machinery and part of aggression against Russia. This will make you a target of retaliatory strikes by Russia. Is this really necessary for you and your children? Besides, joining NATO will lead to limiting your sovereignty and limiting your foreign policy…”

During the following months Shcherbak continued issuing warnings against inclusion in the systems of European solidarity. In August 2018 he was replaced as Russian ambassador by Sergey Bazdnikin. 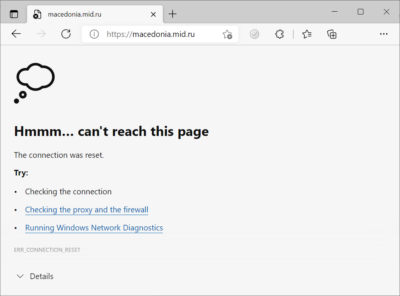 At the time of closing of this article, the website of the Embassy of Russian Federation in Skopje is not accessible.

At the same time, their Facebook page remains accessible. Similar to the threat on Twitter, the Facebook page also contains a post with a warning that all such incidents will be “meticulously recorded” or documented, while the relevant materials will be transferred to the competent authorities for legal evaluation, and those found guilty will be held responsible according to current legislation.