“Be quiet, woman! Your day is on March 8”: How is International Women’s Day celebrated in Turkmenistan?

Turkmen women are told they must be sweet and beautiful 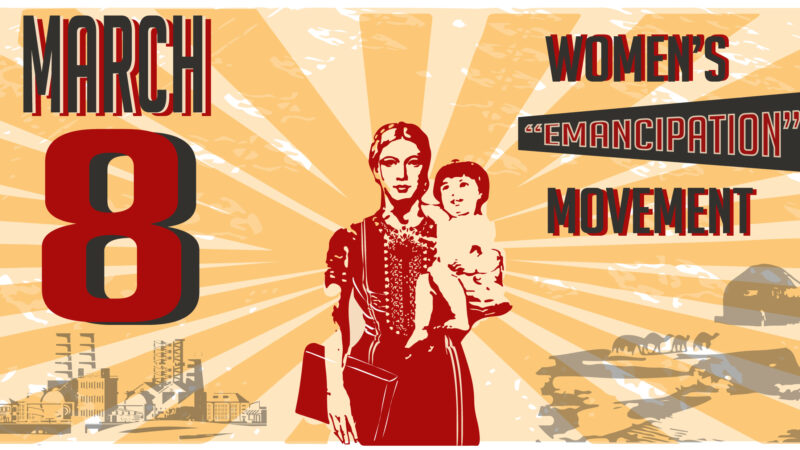 The famous motto of men, “Be Quiet, women! Your day is on March 8!” is an ironic symbol of women’s everyday reality in Turkmenistan. Women in Turkmenistan are granted a single day in the year when men “graciously” agree to honor them. During the remaining 364 days of the year, however, Turkmenistani women are constantly reminded by men (jokingly or not) that they need to remain silent. It is the fate of Turkmen women to wait like “ghosts,” speechless until March 8th magically breaks the spell of their silence.

March 8th, International Women’s Day (IWD), is truly a paradoxical holiday in Turkmenistan. Despite its origin in women’s struggle for equality, over the last three decades, the holiday has metamorphosed into another triumph of male chauvinism and sexism. Instead of being a day for Turkmenistanistan to celebrate women’s achievements and rally for equality, Turkmens end up celebrating womanhood, femininity, and women’s dependence on men.

Every holiday is associated with a social movement that is closely interwoven with that country’s history and national mentality. The IWD is not an exception. Prior to the occupation of the Transcaspian region (the current territory of Turkmenistan) by the Tsarit Russia, the roles of men and women were regulated by nomadic customs and traditions  (also referred to as “adat”) as well as  Islamic canones (also referred to as “sharia”). The mainstream Russian and Western literature claim that the achievements of women’s emancipation in Turkmenistan happened only during Soviet times. However, such analysis overlooks the fact that even before the Soviets colonized present-day Turkmenistan, there were many already “emancipated” Turkmen women.

Historically, Turkic women were considered equitable partners capable of fighting alongside and against men. In nomadic societies, girls were taught at a young age how to handle arms just as equally as the boys.

Seen from this perspective, the mainstream rhetoric that the Soviets created gender equality and civilized “savage” Central Asia is nothing but a hegemonic imperial view wrapped in racism. 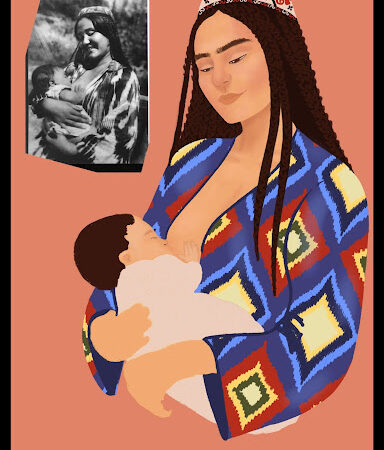 “The Uzbek Madonna” photo by Max Penson, USSR, 1930s. Reproduction of the original photograph. This is an iconic photo that shows the “success” of USSR’s hujum on Central Asian women. Photo via Twitter.

In contemporary Turkmenistan, March 8th has been celebrated as International Women’s Day (IWD) since 2008. Prior to that, the IWD was moved to March 21 by Turkmenistan’s first president, Saparmyrat Niyazov, to merge IWD with Novruz Bayram — the Zoroastrian holiday marking the beginning of spring. Back in the days of Turkmenbashy, the combined holidays were referred to as National Spring and Women’s Day.

The celebration of IWD on March 8th as a singular holiday was reinstated in Turkmenistan under the leadership of the current president Gurbanguly Berdimuhamedov (commonly recognized as “Arkadag,” “Protector” in English)  in 2008. However, the initial idea of celebrating women’s equal rights was replaced by the celebration of female beauty and motherhood, thus, making the holiday akin to Mother’s Day.

To date, in Turkmenistan, women have not yet taken any steps to demand their freedom, nor have they fought for it. As long as Turkmenistan remains isolated from the rest of the world under the brutal and eccentric rule of Berdimuhammedov, gender equality will remain an unattainable dream.

How does the state celebrate IWD?

To “honor” their contributions to society, the state began awarding cash bonuses (60 manats, about USD 3 at the black market rate as of March 2022) to all employed or student women. Housewives and individual entrepreneurs are not eligible for this “generous” gift. By contrast, in Turkmenistan, a kilogram of sugar costs 9 manats, vegetable oil cost 19–25 manats per liter, and chicken thighs cost 16 manats per kg — which is to say that according to the state, women’s contributions are viewed as no more valuable than a small grocery haul.

Furthermore, president Berdymuhammedov stressed that the purpose of granting these “gifts” is recognizing the merits of women in reviving a new era of a powerful state. Put more plainly, Turkmen women are actively incentivized for the birthing, raising, and upbringing of healthy patriots and for preserving traditional family values. In fact, on IWD, at the president’s palace, women are annually awarded a special honorary title known as “Ene mähri” (English: “Mother’s Love”)—analogous to the Soviet “mother heroine” title — which is awarded to mothers who have birthed eight or more children. It appears that women are honored only for their wombs, for what they can produce on behalf of the state, and not for their choice around what to do with their lives and body. On a day meant to empower and uplift women, how can Turkmen women feel valued if all they are celebrated for is their ability to birth children?

How do people celebrate IWD? 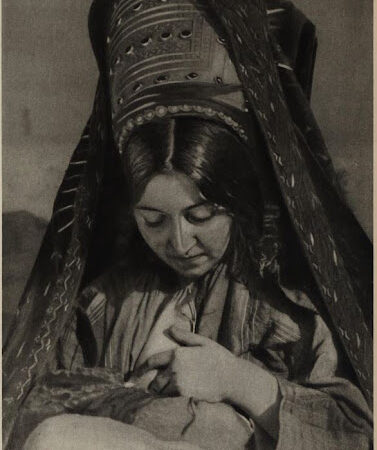 Photo description: A Turkmen woman breastfeeding her newborn was supposed illustrate the success of Hujum, the Soviet policy initiatives aimed at women’s liberation through unveiling in Soviet Central Asia and other Muslim majority regions. Photo via Twitter.

March 8th is the day when Turkmen men intentionally avoid reminding women where they belong — in the kitchen, of course! Though, that’s as far as respect and celebration go, on IWD Turkmen men toast by wishing women “remain feminine, beautiful, tender, sweet,” and calling women a “weaker sex” (Russian: “слабый прекрасный  пол”; Turkmen: “ejizje aýallar we gyzlar”). It begs the question — why should women be only “pleasing to the eye” and remain “sweet and beautiful” for men? Beauty’s destiny is nowhere substantial in life’s challenging moments — instead, why not nurture Turkmen women to be strong and brave? Successful and purposeful? Sadly, none of these questions are openly asked, for it is a woman’s duty to be malleable and obedient. Given that Turkmen women do not get exposed to the concept of feminism because the country’s media and educational curriculum are state-controlled, and the internet is heavily censored, it is important to ask: “Do Turkmenistani women even know that they can challenge traditional gender roles?”

Meanwhile, behind the facade of this one-day “celebration,” women regularly endure gender-based discrimination. For example, it is common for police to confiscate women’s driver’s licenses for spurious reasons without giving them due process. The state also makes it extremely hard for women to legally obtain new driver’s licenses, and hence, they are made to pay bribes. Physical violence against women and the cases of rape are soaring. Young Turkmenistani schoolgirls are forcibly subjected to dehumanizing gynecological examinations for no other reason but to discern their virginity status. In Turkmenistan, these problems are not commonly talked about; in fact, they are hidden deep in the closets of cultural silence “utanç” (English: silent shame)  and “gadagan” (English: a forbidden, taboo topic).

The wind of change?

The educated youth abroad have remained active on social media to counter mainstream narratives by raising awareness on gender issues, especially those related to labor discrimination, unequal wages, domestic violence, and reproductive health rights, through civic engagement on Instagram. Contrary to the youth’s efforts of promoting the true spirit of feminism, affluent Turkmen lifestyle influencers and bloggers living in the capital city of Turkmenistan are diluting the meaning of International Women’s Day by transforming it into a spin-off Valentine’s or Mother’s day. Instead of celebrating women’s strengths and achievements, IWD has become centered around showing off expensive gifts received from male admirers, husbands, or boyfriends.

Meanwhile, women living in the periphery are silently protesting or committing suicide due to unemployment and lack of financial resources to provide for their children.

Due to the economic recession, thousands of Turkmen are now unemployed and suffering from hunger in Turkmenistan. When people have to fret about basic food items such as bread, sugar, and oil, how can women even prioritize gender concerns?

Although there is a growing interest among young people in playing more active civic roles in their communities, their positive contributions are hampered by the existing political barriers, strong patriarchal attitudes, deep-rooted gender roles, and narratives propagated by both by influencers living inside the country and state media. Despite small-scale positive changes occurring at the community level and in cyberspace, major breakthroughs are unlikely to happen without the government’s actionable commitments to gender equality and access to quality education as well as uncensored media. Merely ratifying the Convention on the Elimination of All Forms of Discrimination Against Women (CEDAW) and creating National Action Plan (NAP) on Gender Equality is not enough because, in the context of authoritarian countries,  ratification does not imply an underlying commitment. In fact, the Norwegian Helsinki Committee reports that despite the ratification of the CEDAW, women in Turkmenistan still have a secondary status to men.