These artists call for the emancipation of African women through music 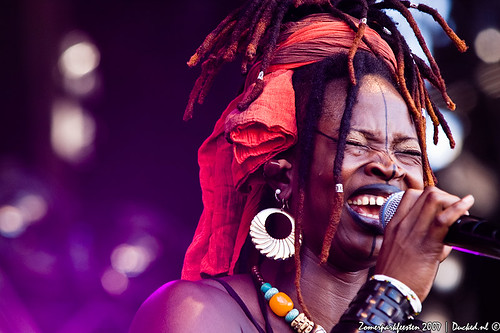 When the Apple Music streaming platform joined the world to celebrate International Women’s Day in 2019, not a single African woman was on Apple’s Global Feminism playlist. The omission of Africa-based feminist singers raised eyebrows and triggered conversations about racism and bias in the music industry. Just one year earlier, the tech giant had released their 2018 A-list of African music. The list included well-known African female singers including Nigerian-born Teni (Teniola Apata) who has oft been described as the Tomboy Feminist superstar of African music.

As Global Voices joins the world in marking this year’s International Women’s Day whose official hashtag #BreakTheBias seeks to free the world of bias, stereotypes, and discrimination, we are celebrating the achievement of African Feminist pioneer singers whose music calls for the emancipation of fellow African women with a playlist.

Whether it is speaking out against sexual abuse, female genital mutilation (FGM), celebrating sexual identity, or promoting gender equality, for these African feminist singers, music is the ultimate weapon.

See our Spotify playlist below with hits from artists like Fatoumata Diawara, Cesária Évora, Shishani Vranckx, Thandiswa Mazwai, and more!