The customs and the culture of the Mros need preserving 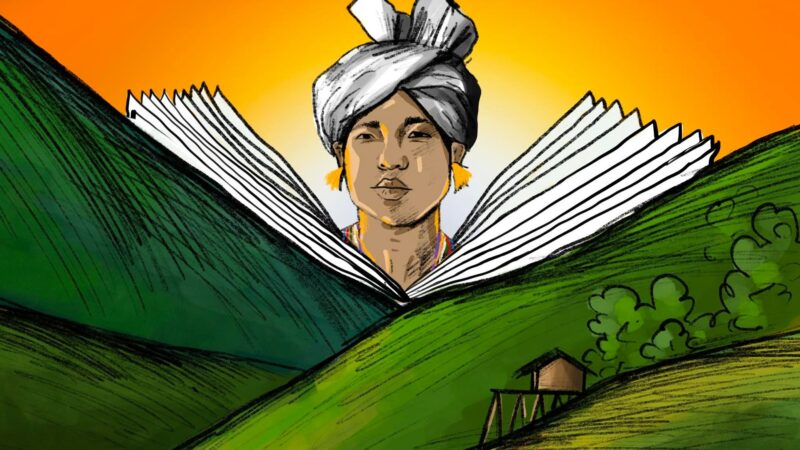 Younguang Mro: “his appearance is like a ray of light in the remote dark Chittagong hill tracts.” Art and words by Tufan Chakma. Used with permission.

Every year, International Mother Language Day is celebrated to promote awareness of linguistic and cultural diversity and celebrating all mother languages in the world. This year, the highlight of this day in Bangladesh was the publication of the first grammar book written in Mro, an endangered indigenous language.

The Mro (or Mru) people live in the Bandarban district of the Chittagong Hill Tracts (CHT) in Bangladesh. According to the 1991 census, their population was 22,178. Their language belongs to the Sino-Tibetan language family.

In 1982, a 17-year-old teenager named Kramadi Menle developed the Mro alphabet. It is a simple left to the right alphabet with no combining characters. But further development of the language has been slow. There is a Unicode block for Mro, but it still cannot be written online.

Read More: For the love of language: The first book of stories printed in Mro language 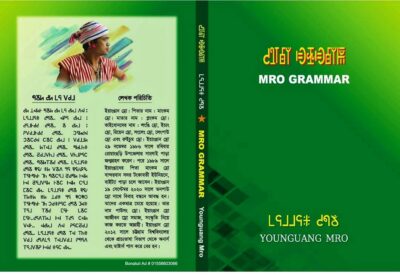 The cover of the first Mro language grammar book “Totong”. Image via Younguang Mro and Adibasi Barta. Fair use.

The name of the first grammar book in the Mro language is “Totong,” and it was written by Younguang Mro, a writer and researcher from the Mro community in the Chittagong Hill Tracts. He created and wrote the grammar following the style of Bengali and English grammar. Although there have been some books published in the Mro language before, the language never had fixed grammar structures written down.

The book was launched in an informal setting on February 17, 2022, at the author's home at Ujani Para in Bandarban city. Younguang Mro said at the ceremony:

Through this book, people of the Mro community will be able to read and write correctly in their language. This will be especially helpful for Mro students also to understand Bengali and English grammar as they have similar structures.

After graduating from the Department of Oriental Languages ​​at the University of Chittagong, Younguang Mro is working for the socio-cultural development of the Mro community. As a writer, Younguang has so far published a total of 28 books on Mro culture and fairy tales; of these, 18 are in the Mro language and 10 are in Bengali.

Mro teacher Ngansing Mro was present at the book launch. He took part in the discussion and said:

After the creation of the Mro alphabet, it was taught to students with handwritten scripts. Now the alphabets and the grammar are printed in a book form. So the students will be able to read and write Mro language more accurately.

Ekushe Book Fair, the largest book fair in Bangladesh, is taking place now, and new books are published every day. On Facebook, young author Suhan Rizwan writes in appreciation of the publication of the first grammar book in Mro language:

That book is invaluable among all the books of the book fair.

Young artist Tufan Chakma highlights various issues of the indigenous communities in Bangladesh through the visual arts. On Facebook, he noted that Younguang's appearance is “like a ray of light in the remote dark Chittagong hill tracts”.

The language spectrum in Bangladesh

Bangladesh is a country of Bangla (Bengali) speakers, with 98 percent of the people speaking the language. According to the data provided by the anthropologists and tribal leaders of Bangladesh, there are about 5 million people of 47 indigenous communities. Of these, about 30 languages ​​of 4 language groups are spoken widely and 12–16 languages ​​are endangered at different levels. Indigenous researcher Salek Khokon mentioned in an editorial on the online news portal BdNews24.com that the Kurukh and Nagari languages ​​have become almost extinct. The Mro language, meanwhile, is on UNESCO's list of definitely endangered languages. 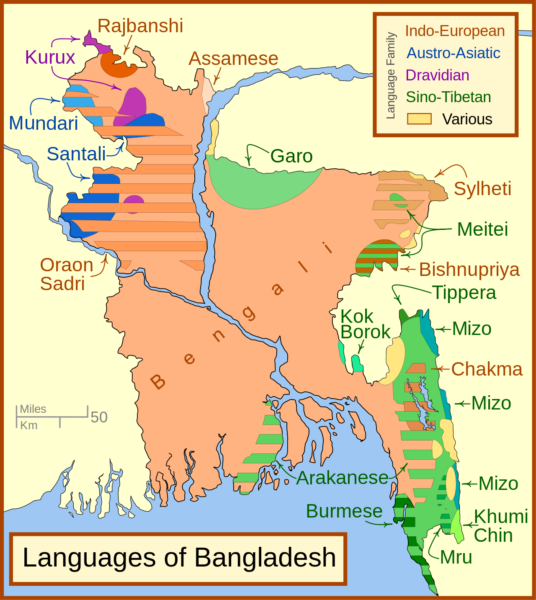 A map of the languages spoken in Bangladesh. Image via Wikipedia by Map Master. CC BY 3.0.

In order to protect endangered languages, the National Education Policy of 2010 recognizes the right of indigenous children in primary schools to learn in their mother tongues. The policy stipulates that “indigenous children will be provided with indigenous teachers and local language textbooks so that they can learn in their mother tongue.” Article 20 states, “Primary schools will be set up in remote areas inhabited by tribals (hills or plains).” Per the policy, the government first introduced primary school books in a number of indigenous languages in 2017. However, five years on, the initiative is in crisis because of the lack of trained indigenous teachers.

People's progress depends on acquiring knowledge through languages. The importance of language, especially the mother tongue, to survival is high. And to learn and practice a language properly, a structured grammar is necessary. In that context, Younguang Mro's “Totong” will usher in a new history of language development for the Mro people.