The strike started in December 2021 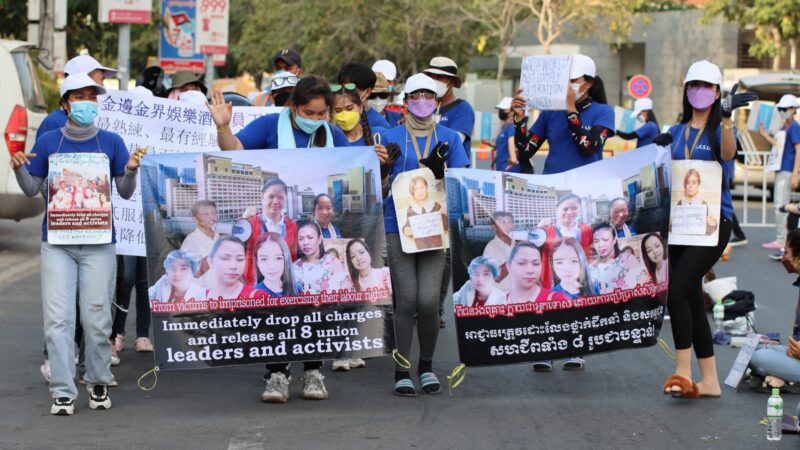 Workers call for the release of fellow strikers who were charged for incitement to commit a felony. Photo from the Twitter post of the Cambodian Center for Human Rights.

Cambodian authorities are accused of arbitrarily using COVID-19 protocols to break up the strike of Naga World Casino workers, who are mostly women.

On December 18, 2021, over 1,300 employees laid off by Naga World in Phnom Penh organized a strike demanding compensation and the reinstatement of 365 union members.

The strike was held daily until local authorities reported a worker who tested positive for COVID-19 and cited this case to order the dispersal of the protest on February 5. COVID-19 tests were soon required for all participants. Those who got negative results were ordered to undergo home isolation while those who tested positive were told to stay in a quarantine facility.

Supporters of the union questioned the order since home isolation is not the protocol for the general population who test negative for COVID-19. They believe it is intended to stop the strike and prevent the union from gathering public support.

Even United Nations experts are suspicious of the basis invoked by Cambodian officials to disperse the strike:

This breaks the continuity of a strike that has been conducted lawfully. More worryingly these sluggish test results and the general approach shows the lengths that authorities may be willing to go to in order to thwart the rights to freedom of association, expression and assembly.

But Phnom Penh officials insist that the strike is causing public harm:

City Hall has eagerly appealed to demonstrators to stop illegal activity. They still violated under the pretext of holding a strike to find labor solutions by gathering through social networks and other means, and ignored health measures while Omicron transmission is spreading in the community with three digits.

Cambodia recorded a spike in new COVID-19 cases in early February, which authorities attributed to lax implementation of health protocols.

Union members attempted to resume the strike several times on February 23 and 24 but the police quickly shoved them into buses before taking them to quarantine facilities.

Yesterday, 2 #NagaWorld workers & union members groups attempted to continue their peaceful strike. The first was encircled by security guards. The second was prevented from gathering in front of Naga World II by +/- 200 police officers. They were shoved into buses & taken away. pic.twitter.com/2BMaBRwwUD

Naga employee were arrested for quarantine again yesterday after they contacted the strike, they were sent to the center far from the city with the dirty room, so they decided to sleep outside last night.#LRSU #NagaCorp pic.twitter.com/T1tFR2qln8

In the past two months, the strikers endured various forms of intimidation. First, the strike was deemed illegal by city officials. On 31 December, 8 union members were arrested and charged with incitement to commit a felony. They remain in detention as of this writing.

Civil society groups monitoring the strike expressed indignation over the treatment of the women workers at the hands of authorities:

Women strikers have been repeatedly and disproportionately targeted by government efforts to disperse the peaceful strike. During January, strikers were arbitrarily denied access to bathrooms nearby the strike site, which were reopened daily as strikers returned home. Authorities have prevented strikers from returning home until after dark on multiple occasions, and at times followed them when they have been permitted to leave.

Media groups also complained against the police after a journalist was harassed while covering the strike.

Instead of acknowledging the demands of workers, the government was quick to judge the strike as a foreign-backed protest meant to launch a ‘color revolution’ in Cambodia. This was disputed by human rights groups providing assistance to the workers.

NagaWorld labor case is continually framed as color revolution to now Covid-19 infection. Sadly they all have to face w/ various tactical obstacles but not met their labor solutions. Today 6 strikers were arrested & only later 3 got released. https://t.co/UHjkuCp0Jn pic.twitter.com/r5hXulJDCU

News website VOD English interviewed Mam Sovathin, a worker recuperating at a quarantine center, who vowed to join fellow workers in resuming the strike this month:

Once we are well, we will continue to strike until we have a resolution from NagaWorld. There is nothing to be afraid of, because we have not done anything wrong, even though some relevant ministries have blocked us from entering.