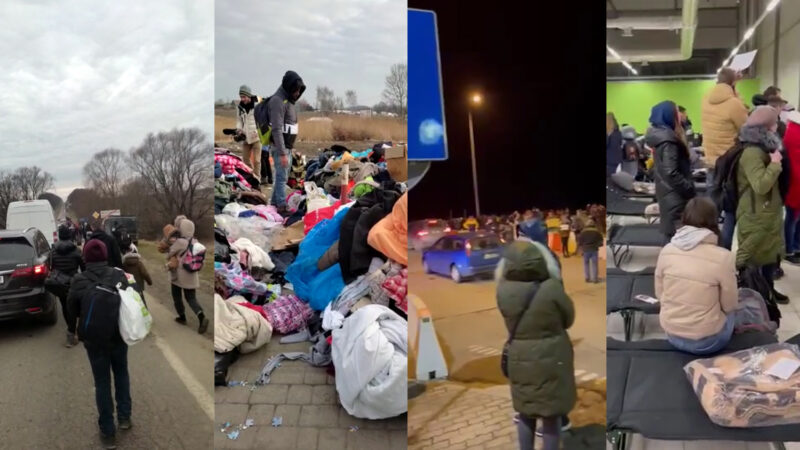 Nepalis in Ukraine. Collage of screenshots from videos by Ishwor Devkota [1]. Image via Nepali Times. Used with permission.

This article was first published [1] in Nepali Times. An edited version is republished on Global Voices as part of a content-sharing agreement. Names have been changed to maintain anonymity.

When Govinda finished his shift in a courier company and returned to his hostel in Kyiv on 24 February 2022 he found many missed calls and messages on his phone from family and friends in Nepal. He knew that things were getting worse as Russia occupied parts of Ukraine, but he was so busy he had not realised that a full-scale war had broken out [2].

“My family in Nepal had heard about what was going on even before I had,” he told us on the phone.

Initially, like many of the 4,000 Nepalis in Ukraine, Govinda and his friends decided to wait it out. But as the air raid sirens started going off near their hostel near Kyiv’s Sikorsky airport, they knew it was time to get out.

“We heard the borders were open, so we ran for our lives,” Govinda recalls, but little did they know what awaited them there.

They left Kyiv on a crowded train at 7 p.m., got to Lviv, took a bus and then a taxi that dropped them 25km from the border because of a traffic jam. They trekked for seven hours in the freezing cold to reach the border only at 6 p.m. They couldn’t drag their bags with them and left them by the wayside.

In an ordeal repeated many thousands of times in this crisis, Govinda and other Nepalis had to wait another 24 hours in the unbearable cold for their turn to cross the border.

The Ukrainians had a system of allowing women, children and the elderly first. Then it was the turn of the European Union and other foreigners, and only then African and Asian students and workers.

“We experienced quite a lot of racism,” Govinda says. “Everyone was tired, hungry and irritable, desperate to get out. But we were relatively lucky, it has been much worse for others. I have become really attached to Ukraine, and really feel bad about what people there are going through.”

At the border checkpoint of Przemyśl [3] on the Polish side, immigration was not allowing people without visas to enter Poland. But as the crowds grew, they relented and gave out one-month entry stamps.

“We found Poland warm and welcoming, they provided us food and transport to the capital,” Govinda says.

At the time that Govinda and other Nepalis were stuck at the border, Ishwor Devkota of the Non-Resident Nepali Association (NRNA) got a call from stranded Nepalis and drove seven hours to the Przemyśl checkpoint. It was utter chaos, and all attempts to convince the Polish guards to bring the Nepalis out were in vain.

“There was nothing we could do at that time, so we drove back empty-handed all the way,” says Devkota, who runs the Namaste Nepali restaurant in Wrocław.

In the five days since, more than 200 Nepalis who managed to flee Ukraine have arrived in Warsaw where the NRNA is looking after them. Many of them are women.

“We rented a hostel and used donations to take care of the fellow Nepalis, but this war could drag on and we need a longer-term strategy,” Devkota said on the phone, urging the government in Kathmandu to step in.

Nepal’s ambassador at the Berlin embassy Ram Kaji Khadka [4] is said to be on his way to the Ukrainian border to see if he can bring out Nepalis still stuck on the other side. As stranded refugees run out of food and money, some Nepalis still on the Ukrainian side have called to say they fear being looted.

A dozen or so Nepalis have also managed to find their way to Slovakia. Jaya Prasad Siwakoti, who is a member of a Europe-wide NRNA Rescue Committee, has closed his restaurant in Bratislava to feed and house them. More than 70 Nepalis have also come across the border into Romania [5].

Within Ukraine itself, the remaining Nepalis speak of the fear of a full-scale Russian assault on the cities. Many of them are students, while others are workers like Govinda.

“I managed to get out to safety, but the future is very uncertain for me,” Govinda told Nepali Times over the phone. “I don’t see returning to Nepal as an immediate option. Besides, the embassy said we had to buy our own tickets back. We will see if we can work while we wait it out here.”

Govinda paid NPR 800,000 (about USD 6600)  to an agent to get him to Europe, and it was to Ukraine. “I had never heard of Ukraine before, and it did not look too bad when I googled it. Europe was Europe and that is what mattered to me,” he recalls.

He entered Ukraine on a student visa for language classes, but that was just an excuse to get into the country. He quit language classes, and started working at a shawarma restaurant and later switched to a courier company that paid him USD 500 a month.

Prakash is another Nepali who also made it out to Warsaw, and says that for the moment he is just happy to have escaped the war zone in Ukraine. “Right now we are just taking it one day at a time, and trying to gauge the situation and work if they allow us.”

Prakash first worked in Malaysia [6] and from his savings, paid NPR 1.4 million (about USD 11,500) to a recruiter to get him to Europe, but when he got to Ukraine he found out that western Europe was out of bounds. He was earning USD 800 a month and still paying back his loans.

He adds, “Even if I go back to Nepal, I will need to migrate again to earn money to pay back.”

For more information about this topic, see our special coverage Russia invades Ukraine [7].