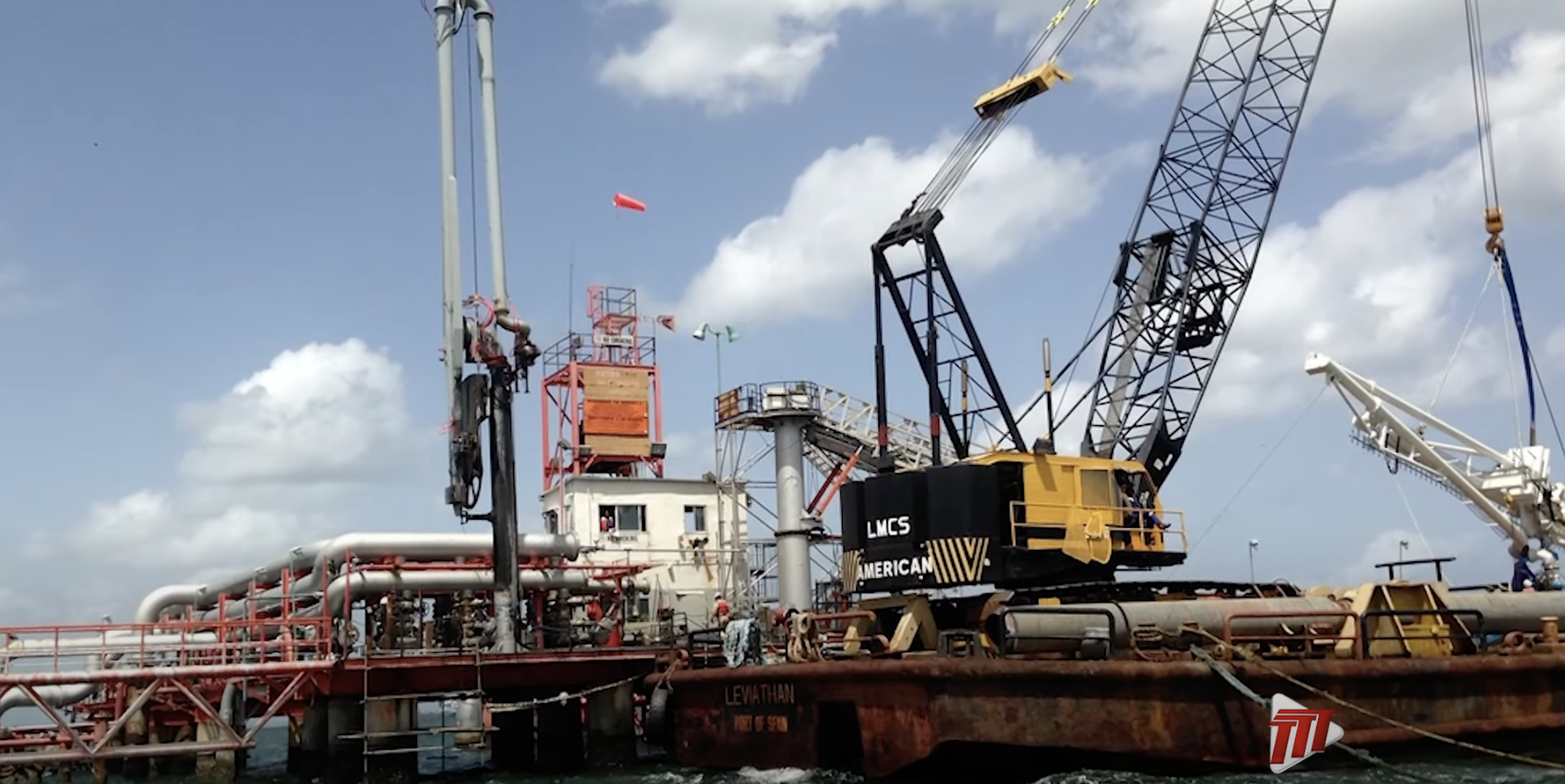 Screenshot of the berth area in which the tragedy occurred on February 25, 2022, taken from a YouTube video of a Trinidad and Tobago Television report titled, ‘Suction Pulled Divers Into Pipeline.’

On February 25, five divers on a job for Paria Trading Company Limited, a state-owned fuel and logistics business in Trinidad and Tobago, were sucked into the 36-inch oil pipeline on which they were working. The cause of the accident, initially unknown, was later attributed to a powerful vacuum effect presumably triggered by the removal of a flange attached to the vertical section of the U-shaped conduit.

The incident occurred at approximately 2:30 p.m. local time (UTC-4). Thanks to other divers located nearby who heard the distress call and — against company instructions — went to assist, one diver, Christopher Boodram, had been rescued and taken to hospital a few hours later.

Although the company claimed that emergency protocols were immediately put in place following the incident, Boodram said that the men were trying to survive by staying within an air pocket and sharing oxygen tanks.

The rescue divers heard knocking coming from inside the pipe but said the coast guard blocked them from trying to reach the other four men — Rishi Nagassar, Yusuf Henry, Kazim Ali Jr., and Fyzal Kurban, Boodram's relative, whose father was killed after an an oil platform explosion in 1985. There was an investigation into the cause of that explosion, but the report's findings were never made public.

Coast guard higher-ups, meanwhile, have since said they will look into the obstruction claims. The volunteer divers estimate it was only between 4 and 5 o'clock the next morning that Paria sent remote technology into the line. By then, it was too late.

Public criticism over the delay was rife on social media, supported by the families’ claims that the company had not acted urgently enough in their rescue effort. However, Kazim Ali Sr., who owns the company at which the diving team was employed and whose son was one of the trapped divers, said that Paria had been “fully supportive” throughout the process and generous with its resources in supporting rescue efforts.

Nevertheless, the traumatised families protested outside the premises of Paria Trading, supported by members of the Oilfield Workers’ Trade Union and certain political parties. After authorities tried to disperse the gathering by citing COVID-19 regulations, one Twitter user made the point that Carnival enthusiasts were being allowed to congregate maskless with no consequences:

Cops break up the protests related to the divers.

Yet, all ok with the maskless carnival madness.

At least one non-governmental organisation also picketed the home of Paria Terminal Manager Collin Piper. One of the families’ biggest grouses throughout the whole ordeal has been the insensitive manner in which they believed they were treated by company and state officials.

When Paria defended its position, one Twitter user quipped:

Family members have consistently maintained the company's level of communication was lacking.

By February 27, Paria's chairman Newman George had confirmed that the four missing divers were dead and the rescue mission had changed to one of recovery:

Those divers were treated as though they were tools that simply fell into a pipe. No urgency to retrieve them. Human life clearly viewed as replaceable. Extremely sad. Poor emergency response from whichever companies/organizations are involved. Come on Trinidad and Tobago.

Three of the four bodies were retrieved by 5:55 p.m. local time on February 28; the body of the fourth missing diver was eventually recovered at 12:36 a.m. on March 3.

Once the deaths had been confirmed, the scene at the Paria compound was one of such anger and inconsolable grief that the company's condolences, as well as Prime Minister Keith Rowley's assurance that “nothing will stand in the way of determining how this tragedy occurred” seemed to fall on deaf ears as families expressed their intent to seek legal recourse.

On March 1, Energy Minister Stuart Young announced that an independent committee of energy-sector experts will be appointed to investigate the incident.

Even as the nation mourned, social media users had a lot to say about how the entire affair was handled and what could have been done to prevent the tragedy. Facebook user Wynell Gregorio summed it up by declaring:

More than 24 hours after tragedy struck, there was no formal response about the fatalities which occurred under your watch. […]

It is shameful that yet another state company has been caught with no communications crisis plan and a newspaper editorial is inspired to comment on the apparent absence of protocols and plans for handling a crisis.

Lara-Quentrall-Thomas echoed the call for proper accountability, while Paulette Cazoe made the point that “accountability here does not only fall on Paria’s shoulders.” Many other Facebook users, however, were of the opinion that Paria was ultimately responsible, and should bear the brunt of the blame for the tragedy.

Now we all calling for procedures and when Paria executed them they are being vilified. If Paria allowed [the volunteer rescue divers] to continue the rescue attempts and they also got vacuumed in, who would be held liable? We’d be singing a different tune.

Nevertheless, several Twitter users had little faith that those responsible would face consequences:

Absolutely disgusting the way the situation with those divers was handled. We'd expect resignations and firings, but this is Trinidad, so we know that's not going to happen.

Let’s be real, unfortunately those families aren’t gonna get actual justice for those divers cuz Trinidad ain’t real. They gonna get all expenses paid funerals, some money with counseling and that angers me.

Another felt that the public outcry was overinflated:

I don’t like how ppl blame Trinidad for things that happen everywhere. It’s an extremely unfortunate situation but divers have accidents and die all the time all over the world. It’s not a Trinidad thing

ZMG, however, thought the crux of the matter lay not in the event itself, but in the response:

Those divers were treated as though they were tools that simply fell into a pipe. No urgency to retrieve them. Human life clearly viewed as replaceable. Extremely sad. Poor emergency response from whichever companies/organizations are involved. Come on Trinidad and Tobago.

Demming also believed that the mishandling of the event spoke to an even greater calamity:

Trinidad and Tobago is facing a crisis of leadership at all levels and we have tainted every process with our politics. Unless there is a fundamental redesign of our systems, processes and procedures, tragedy will continue to befall us. We have the talent but we seem to lack the political will to do what is right every time.

Other netizens felt that the whole situation was turning into a “circus, especially on social media,” a perception exacerbated by the circulation of a video of the men's bodies. Trinidad and Tobago's Acting Commissioner of Police McDonald Jacob said he was “disgusted” by the clip, adding that if any member of the police service was found to be involved, disciplinary action would be taken.

Meanwhile, attorney Vanessa Soobrattie started an online petition advocating for the board and management of the Paria Fuel Trading Company to be dismissed pending investigation. As at the time of publishing, there were over 50,000 signatures.