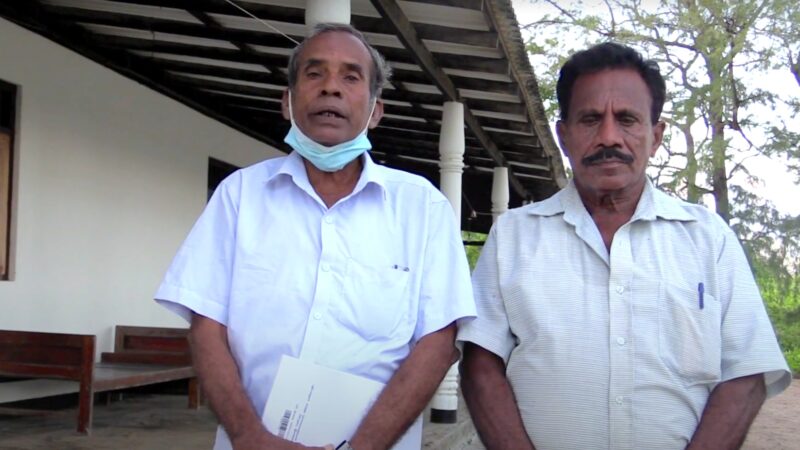 Locals from the Kuchchaveli Divisional Area which is being threatened by encroachments. Screenshot from YouTube video by Groundviews Sri Lanka.

This post by Pranith WiraSinha originally appeared in Groundviews, an award-winning citizen media website in Sri Lanka. An edited version is published here as part of a content-sharing agreement with Global Voices.

Years’ worth of censuses from the Trincomalee District in the Eastern Province of Sri Lanka will point out a slight numerical majority and minority in its various communities. Yet it is worth noting that, since the 1940s, no one ethnicity has been a 50 percent majority in the district. “It is the most ethnoreligious pluralist slice of Sri Lanka,” wrote political commentator Tisaranee Gunasekara in one of her columns. It speaks to the identity and spirit of the city, and indeed the district, as multi-dimensional and multi-faceted, vibrant. It speaks to the composition of communities that dot the area and make up its socio-cultural fabric. Although home to Tamils, Muslims and Sinhalese, it is a city whose identity has strong Tamil and Saivite roots.

This identity is of course one that is meant to be erased and deemed irrelevant, and then reinterpreted as foreign and alien objects that supplanted a millennium of Buddhist dogma sorted into every nook and cranny of Sri Lanka. Like the Buddha statue that was spontaneously erected one night in the city centre in 2005 (militantly advocated by a then lesser-known Buddhist monk Galagoda Aththe Gnanasara Thero), the strides made by the state after 2019, backed by a ​​Presidential Task Force on Archaeology in the Eastern Province, show a concerted and forceful effort to change the dimensions, demography and identity of the province.

A task force headed by no historian familiar with the language of the ancient Tamils, contained to only the Eastern Province and intent on documenting traces of Buddhist ruins, and Buddhist ruins only, amidst a historically diverse and sensitive province is curious, to say the least. It wasn’t until late 2021 that the task force saw Tamil and Muslim representation— only two members out of the 18 members of the committee, to represent 70 percent of the Eastern Province.

While military men and media moguls make for questionable appointments to the task force, the major concern to the communities on the ground at Kinniya, Kuchchaveliya or Kannneiri are the powers the state-appointed task force has granted to the likes of Ven. Panamure Thilakawansha Thero, the chief incumbent of Arisimale Buddhist Temple, a priest who has been at the center of the illegal encroachment and forceful settlements along with the Kuchchaveli Divisional Area. The Arisimale Viharaya and its chief incumbent lay claim to the land when in the late 1970s and early 1980s Cyril Mathew as minister of industries made efforts to settle a number of Sinhala communities and build Buddhist temples in the area, thus tracing Sinhala settlement to 1977. As the apparent re-discovery of the Buddhist ruins in these areas has led to more sections being cordoned off by the Archaeology Department, more land has been granted to the Viharayas or Buddhist temples such as the Pichchamal Viharaya with estimates of 320 to 400 acres, according to one resident. The Arisimale Temple has thus expanded its grasp and presence, promoting through a highly detailed and professional website its historical claims to the area.

Screenshot of the homepage of the Arisimale Viharaya

A curated selection of high-definition audiovisual content reveals a well-thought-out strategy to cater and call to action the Sinhala Buddhist community to rally to the temple’s noble cause, off-shooting a brand of pilgrimage tourism in the process.

In the following video by GroundViews, two members of the local communities describe how they are being threatened by the strides made by the Task Force on Archaeological Heritage Management for the Eastern Province.

Local tourism, for that matter, plays a larger role than might be expected in challenging the established cultural imprint other communities have had since they first settled along the eastern coastline in the early 19th century. Following their migration to safer areas during hostilities of the 30-years-long Sri Lankan civil war beginning in the mid-1980s, they found on their return after the end of the war that their lands had been taken over. If not by the military, then by the forests and thus cordoned off as a protected area by the Forest Department. When that proved insufficient, the prospect of artifacts and ruins strewn across the area that predated these settlements seemed appealing to certain parties. A task force was created. Travel vlogs streamed off the pristine Eastern coastline tend to often make note of “foreign extremists” who are destroying the lesser-known Buddhist cultural heritage in the East. The Sri Lankan military, which still retains its hold on the area, if not through the dozens of manned roadblocks and bases, then through a façade of army hotels and Air Force golf courses, now also has a presence at significant yet contentious sites such as the Arisimale beach or the Kuchchaveli Pichchamal Raja Maha Viharaya, entry to which requires prior permission from the Navy.

While it is admitted by the communities in the area that certain sections of land and coastline along the Pulmoddai Road have historical and cultural value to Buddhist identity and should thus have protection under the law, it should not allow for any of what has been taking place; a claim to a land, based on the belief that jasmine flowers from a viharaya were offered to the Ruwanweliseya stupa in the 1st century BC should not supplant existing communities who have settled down and had a claim to the land for two centuries.

Buddhist philosophy is not one based on historical real estate. In the following video by GroundViews, Asik Mohamed Ibrahim from the Muslim community in Kuchchaveli explains that his ancestors started living there over two centuries ago but they are threatened by these forceful encroachments.

In an area such as the Kuchchaveli Division that is and has historically been a heavily Muslim-populated area, more land to the temples eventually sees the settlement of devotees to worship at the temples, altering the existing societal fabrics. These are in addition to private land being cordoned off and denied access to by the Forest Department, the Department of Wildlife and Conservation and the Mahaweli authorities due to varying and sometimes unreasonable reasons.

Tensions are high as Trincomalee’s claim to being at the centrality of Sri Lanka’s pluralistic and multicultural identity continues to be re-interpreted as a place homogenous to one race, one religion, one ethnicity.