The young activist lost a kidney during previous incarceration 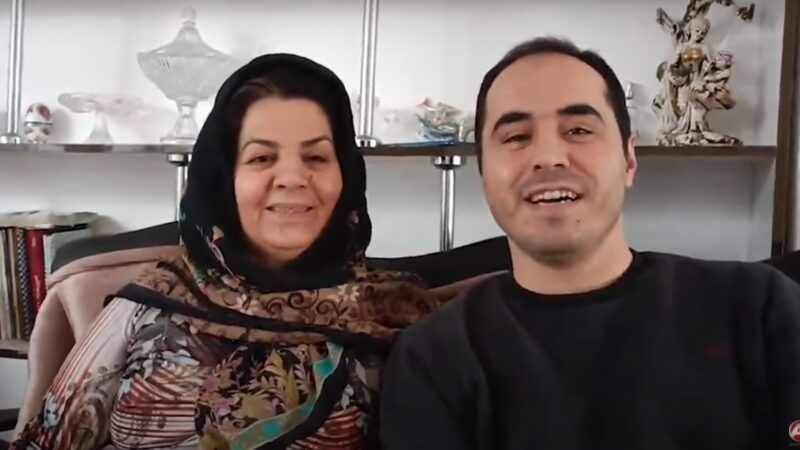 Prominent Iranian blogger was abducted from his house in Tehran on February 23 following critical tweets about a controversial internet protection bill. The image is a screenshot from a Youtube video published on February 23, in which he appears with his mother and father.

Hossein Rongahi Maleki, a prominent blogger, activist, and former prisoner of conscience, has begun a hunger strike in protest of his arrest on Wednesday February 23, following tweets he made critical of Iran's parliament's move to further restrict access to the internet.

According to the Committee to Protect Journalists, the Tehran home of Ronaghi Maleki was raided by unidentified security forces who took him to an unknown location. “The authorities have not officially accepted any responsibility for Ronaghi Maleki’s arrest, no charges have been formally announced, and CPJ was unable to confirm where the blogger is being held, the reasons for his arrest, or which branch of the security forces arrested him,” the organization said in a statement published on February 24.

On February 27, Hossein's brother was quoted as saying that the detained blogger started his hunger strike as soon as he was arrested.

The raid on Maleki's house and his abduction came a day after a thread of tweets he published on Tuesday:

If you can't write the truth about the “Protection Plan” and internet censorship in Iran, do not bury the truth.
The Protection Plan was a decision made by the entire system based on the demand from Islamic Republic's leader who had stated: “Virtual space must be controlled.” https://t.co/Ytj07e3TMw

Norway-based organization Iran Human Rights expressed its concern regarding Hossein's health condition and safety, stating that “Hossein Ronaghi’s lawyer has also been denied access to his client or his case file since his disappearance on February 23. Hossein is currently held in the general ward of Evin Prison.”

Iran's internet protection bill, which is currently being deliberated in parliament, has triggered much controversy and concern over its breach of personal rights. Article 19 of the bill, which is expected to be approved despite opposition in the assembly, “will hand over complete control over the internet to authorities.”

Several media and human rights organizations such as Reporters Without Borders condemned Hossein's arrest and urged his immediate release.

According to his brother, Hossein had received several threatening calls in recent weeks and told his family that he might be arrested again soon.

London-based Manoto TV quoted Hossein's mother as saying that she was told by an interrogator that “her son will be executed.”

Hossein Ronaghi has been a defender of freedom of expression for many years. He was earlier arrested  in December 2009, six months after Iran's disputed presidential elections. He was immediately incarcerated at the notorious Evin prison, serving 376 days in solitary confinement before his trial finally began in 2010. This led to a 15-year sentence on charges of “spreading propaganda against the regime,” “membership of the Internet group Iran Proxy,” and “insulting the Iranian supreme leader and the president.” He lost one of his kidneys when he was in jail.

In its statement published Thursday, CPJ called for the immediate release of the prominent blogger, and the immediate dropping of all charges against him. “With the arrest of Seyed Hossein Ronaghi Maleki, the Iranian government is seemingly continuing its absurd practice of arbitrarily detaining journalists without charge,” said CPJ Program Director Carlos Martinez de la Serna. “Authorities must release Ronaghi Maleki immediately or at least reveal his location and any charges against him and allow all Iranians to freely access the internet,” the statement said.