Of all ASEAN nations, Singapore made the strongest statement 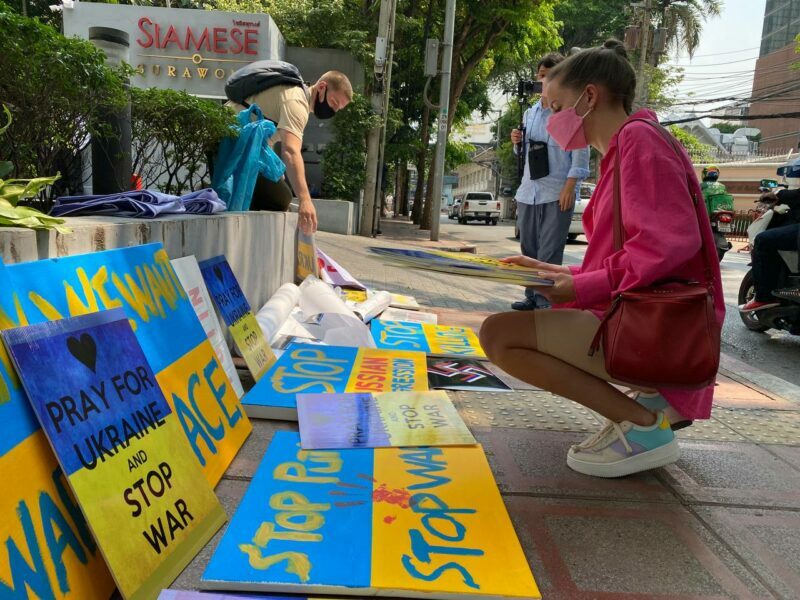 When Russia invaded Ukraine on February 24, 2022, nations all over the world spoke out to condemn the attack and offer support to Ukrainian citizens. However, Southeast Asian leaders were notoriously sluggish in addressing the conflict, though many have since voiced their support for Ukraine.

While the ASEAN block made noncommittal references to the “conflict in the West” and called for de-escalation, many Southeast Asian leaders are choosing to stay silent and sidestep any direct references to Russia and its president Vladamir Putin. In fact, only Singapore and Timor Leste signed a UN draft resolution calling for an end to Russian aggression against Ukraine. The resolution ultimately failed.

In a time when global tensions are at a boiling point, staying silent can signal alliances and tensions just as much as an outright official statement. At the same time, many Southeast Asian countries are grappling with the massive political and economic implications that come with taking sides in this newfound conflict. How are other Southeast Asian nations reacting to the crisis to the west?

In the lead-up to the conflict, Indonesian President Joko (Jokowi) Widodo released a statement through his official Twitter account saying,  “Stop the war. This war torments humanity, and endangers the world.” While Jokowi may have been the first ASEAN leader to directly address the conflict, his lukewarm statement drew criticism online, particularly from activists who accused him of hypocrisy for his administration’s militaristic aggression and violence in Papua.

Caricature @korantempo Describes the character of the President @jokowi who has no sympathy for the resolution of military violence in Papua.

While #RusiaVsUcrania & #Myanmar Jokowi became a hero, in fact Jokowi did not practice the same thing.

Some activists, including Amnesty International official Veronika Koman, also highlighted the immense amount of international media attention in Ukraine, compared to the ongoing war in Papua, which gets comparatively little attention or resources.

The war in Ukraine will be televised, unlike West Papua. https://t.co/gZRXnK39rC

Meanwhile, people took to the streets all over the archipelago to condemn Russia’s actions and voice support for Ukraine. In Bali, demonstrators, including many Ukrainians, gathered outside the Ukrainian embassy to protest the invasion.

As of February 28, some Jokowi supporters proposed he should extend his presidential term which is set to end in 2024, citing the COVID-19 pandemic and the war in Ukraine.

Singapore is one of the only Southeast Asian nations to strongly come out against Russia. The nation has imposed strict sanctions against Russia including banning the export of “any items that can be used directly as weapons,” said Foreign Minister Vivian Balakrishnan in a Singaporean Parliament address on February 28. It will also block Russian banks and certain financial institutions.

“We continue to value our good relations with Russia and the Russian people. However, we cannot accept such violations of sovereignty and territorial integrity of another sovereign state,” Balakrishnan said. “We will continue to work with our ASEAN and international partners to take a strong stance against the invasion of Ukraine and to end further violence and bloodshed, and to de-escalate tensions.”

Malaysian Prime Minister Ismail Sabri Yaakob is currently visiting Cambodia and in talks with Cambodian Prime Minister Hun Sen, who is the ASEAN chair this year. The pair addressed the invasion in a joint press conference, in which Hun Sen said: “The Malaysian Prime Minister and I also discuss this issue and what we wish to see is a peaceful solution. I and the Malaysian prime minister are of the opinion that ASEAN needs a strong voice. Therefore, any statement to be issued should have the consensus of ASEAN including on the Ukraine-Russia issue.”

The Malaysian PM, Ismail Sabri, went on to tweet “The government’s priority at this time is to ensure that Malaysian families in Ukraine are safe.”

Since February 26, Malaysia has been evacuating its citizens in Ukraine.

The Philippine government voted “yes” to the UN General Assembly resolution during the Emergency Special Session on Ukraine. The full statement condemning the invasion of Ukraine is posted on the website and social media accounts of the Department of Foreign Affairs (DFA).

‼️READ‼️#DFAStatement: At the Emergency Special Session of the UN General Assembly on Ukraine

DFA Secretary Teodoro “Teddy Boy” Locsin Jr. also explained why the Philippines was not among the countries which signed an earlier UN resolution condemning the invasion:

Because we're not fucking members of UN SC. Our turn comes at UNGA with special emphasis on the deplorable indeed odious use of murderous separatism and secession as weapons of diplomacy to make target states submit. Unlike SC, we will speak forthrightly. https://t.co/d0qpjRyqTb

He and his team went to Poland to arrange the repatriation of some Filipinos who escaped Ukraine. There are around 181 Filipino nationals in Ukraine. In another tweet, he noted that some overseas Filipino workers (OFWs) chose to remain in Ukraine:

Many OfW domestics are reluctant to go. Their employers are pleading them to stay behind. That is what Filipinos do. Stand beside the one watching out for the other one beside her or him. We are Roman Legionnaires. In Kuwait OFWs stayed by their employers during Iraqi occupation. https://t.co/hMvh4gjDio

The Thailand government said 142 of its citizens had already left Ukraine. At the UN, it called for a diplomatic resolution to the crisis and called for de-escalation. Local reports discussed the possible economic fallout of the crisis in Ukraine and its impact on Thailand’s hosting of the Asia-Pacific Economic Cooperation (APEC) this year. Russia is part of APEC.

But Sweden’s ambassador to Thailand urged the government to reconsider its neutral language in describing the situation in Ukraine:

To all our 🇹🇭 friends. Language matters. What is happening in Ukraine is not a crisis, not two parties that need to de-escalate. It is an aggression, a war. Let us not imply a parity that does not exist. Russia, and Russia alone, is responsible. #StandWithUkraine pic.twitter.com/zRRUkgZLzA

Daily protests condemning the invasion have been organized in the capital Krung Thep Maha Nakhon (Bangkok) attended by Thais, Ukrainians, and other nationalities. Protests were also organized in Chiang Mai and Phuket. Police blocked protesters from getting near the Russian Embassy, especially when protestors brought out a TV screen showing a video of Russian military violence.

Protesters are still gathering in front of the Russian Embassy, and said that they will be around until 17.00. pic.twitter.com/eU2FY8kRO6

Despite these protests calling for peace in Ukraine, there are ultra-royalist groups which expressed their support for Putin. They claimed that Putin is an admirer of Thailand’s former King, the late Bhumibol Adulyadej.

Among those to support Russia’s invasion of Ukraine is Myanmar's military junta, which called the invasion “justified” in a televised statement.

Junta spokesperson, General Zaw Min Tun, told VOA Burmese, their military supports Russia for two reasons. “No. 1 is that Russia has worked to consolidate its sovereignty,” he said. “I think this is the right thing to do. No. 2 is to show the world that Russia is a world power.”

A military group overthrew the Myanmar government in February 2021. Ever since the coup, citizens have been protesting both publicly, and through passive “silent strikes.” The international community has almost unanimously condemned the junta in Myanmar and called for a return to democratic rule.