Memories of ‘mas’-making: Creating giants of Trinidad and Tobago Carnival 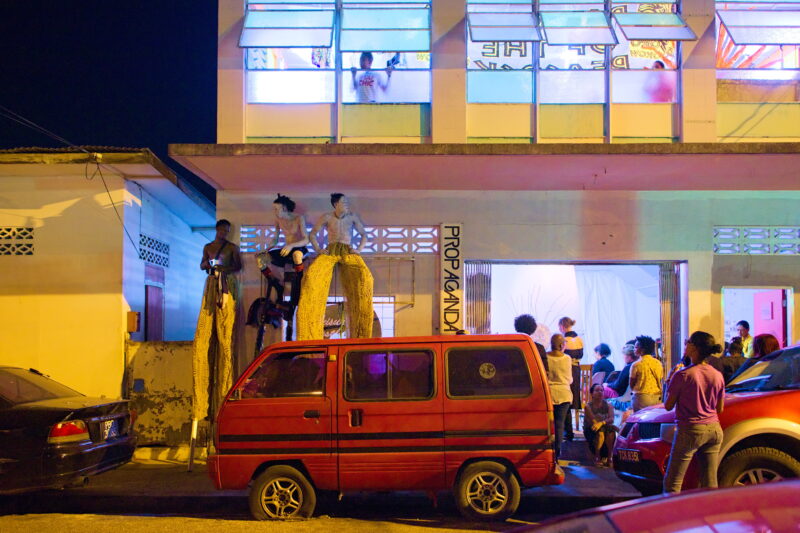 Moko Somõkõw launches its 2019 presentation ‘The Palace of the Peacock,’ alongside an event by Vulgar Fraction, Granderson Lab, Erthig Road, Belmont, February 14, 2019. Photo by Shaun Rambaran, used with permission.

Editor's note: This story was written by artist, costume designer and Moko Jumbie Alan Vaughan. It describes his experience working at a collaborative art and performance space that had recently opened in Belmont, a district close to Trinidad's capital known for having produced many cultural giants.

Housed in a former printery, Granderson Lab is now the home of Alice Yard and The Cloth/Propaganda Space, and has become a centre of creativity and community activity, hosting discussions, fashion, art and stilt-walking events, even a community library. Vaughan, who had come from his base in Newcastle, U.K., first designed a band in 2013 from Trinidad's southern city of San Fernando. That first year in Port of Spain, 2015, he was given a small, downstairs area at Propaganda Space to use. For each subsequent Carnival until the onset of the COVID-19 pandemic, he has worked on the bands as an artist-in-residence at Alice Yard, upstairs.

Vaughan and the community of Moko Jumbies that come together in various configurations every Carnival to work and perform, have produced several winners in Trinidad’s traditional masquerade competition, including a King in the Africa category and two Queens of Carnival, individual and mini-band winners and for overall costume design. “Mr Alan” himself is the current Champion Moko Jumbie, having won in 2020, the last pre-pandemic Carnival. 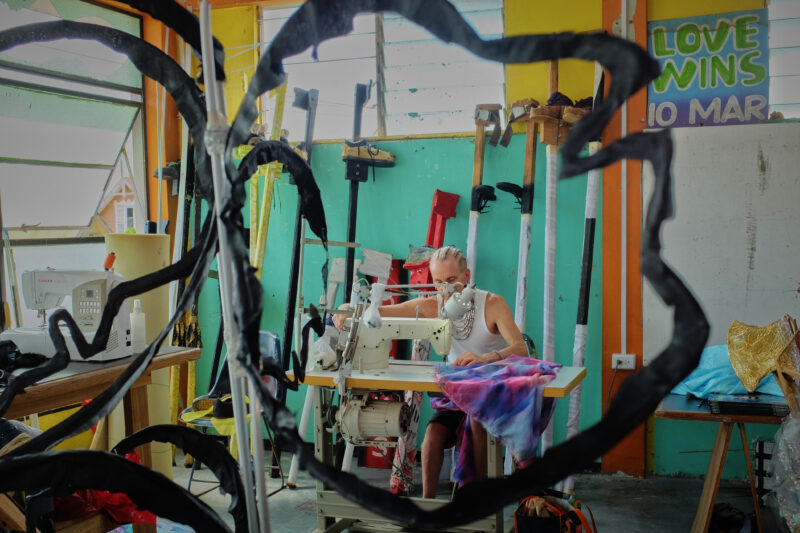 Alan Vaughan, working on costumes for the band Moko Somõkõw. Photo by Sforzamedia, used with permission.

Esú is at the entrance, red and black at repose draped over the partition to the interior, his crown of banana, cowrie and calabash resting inside just beyond the step. Jonadiah is still at the opposite end of the island in South, sleeping in one of the concrete houses built in rows over the cane fields of Ste. Madeleine. As dusk approaches, when the street is tired and radiating the day’s heat, he will arrive and weave some more fresh stripped fig; and as darkness falls, he will inhabit the mantel and rise twenty feet into the sodium-lit air amongst the current wires and telegraph poles. Passing traffic will slow, headlamps glaring, and pedestrians will watch; and some will stop and take photographs.

First sunlight threads through the back of the old printworks. An invocation drifts across the neighbourhood. Ella Andall is calling as people open doors, bathe, and children search for book bags. The first cars come in ones and twos, the vanguard of an incoming tide, and the early-start office and shop workers from the narrow lanes walk by in crisp shirts and perfume on their way to the day’s commerce. A rat scurries under a cupboard, to sleep in a dark place. 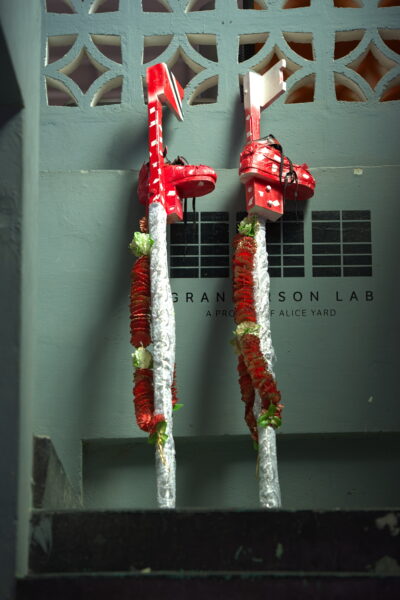 Granderson Lab serves as the base of operations for the 2018 efforts of Moko Somõkõw: The Magnificent Return of Sunjata, February 13, 2018. Photo by Shaun Rambaran, used with permission.

Littered, stacked, and tumbled, the Moko Jumbie space is chaos. The Virgin Queen’s crown of cowries rests against the cheap plastic sewing machine, whose overlock thread is held by wire taped to an empty Stag. Her six-foot collar of gold emergency foil leans against a rack where Baron Samedi and Maman Brigitte have left their clothes, waiting for more embellishment of chicken feet, shells, and artificial flowers. Its underside of blue organza will become, when finished and carried on stage, the salty water of Yemanja’s Atlantic. A car tyre and a hacksaw, a bag of nails to shoe the sticks, tins of Evo-Stik exude their fumes through battered lids (they never close, once opened), and extension trip wires tangle around chairs and over trestles cluttered with fabric and scraps, scribbled notes and dirty masking tape.

The street enters this liminal place at will through the scissors gate, but eyes must peer more closely into the interior, darkened by the exterior glare, and people, assuming the padlocks are locked, must call before; with a screech and clatter, a gap is pulled wide enough for them to come inside, if the oil-stained mechanic is not mending a car on the kerb, and lets them know the secret.

Upstairs, the tailor works, cutting and sewing soft fabrics to fit curvy women, who come in the evenings on their way home, to purchase their bespoke Sunday best or Carnival glamour.  He is always there to help, to boost morale when exhaustion and abandonment loom, to draw a pattern, to provide a shoulder. And La Diablesse, argumentative and sincere, fuelled by Carib and tobacco, laughs and curses with equal alacrity as she paints and stitches her costume and accoutrements. And then we hear the Jamaican lilt of the sculptor, ready to give a welcoming hug in his overalled arms, his soft voice belying his blacksmith’s strength, the chainsaw he wields like a pen, causing a fine dust of wood to float and settle on terrazzo and hidden ledges. 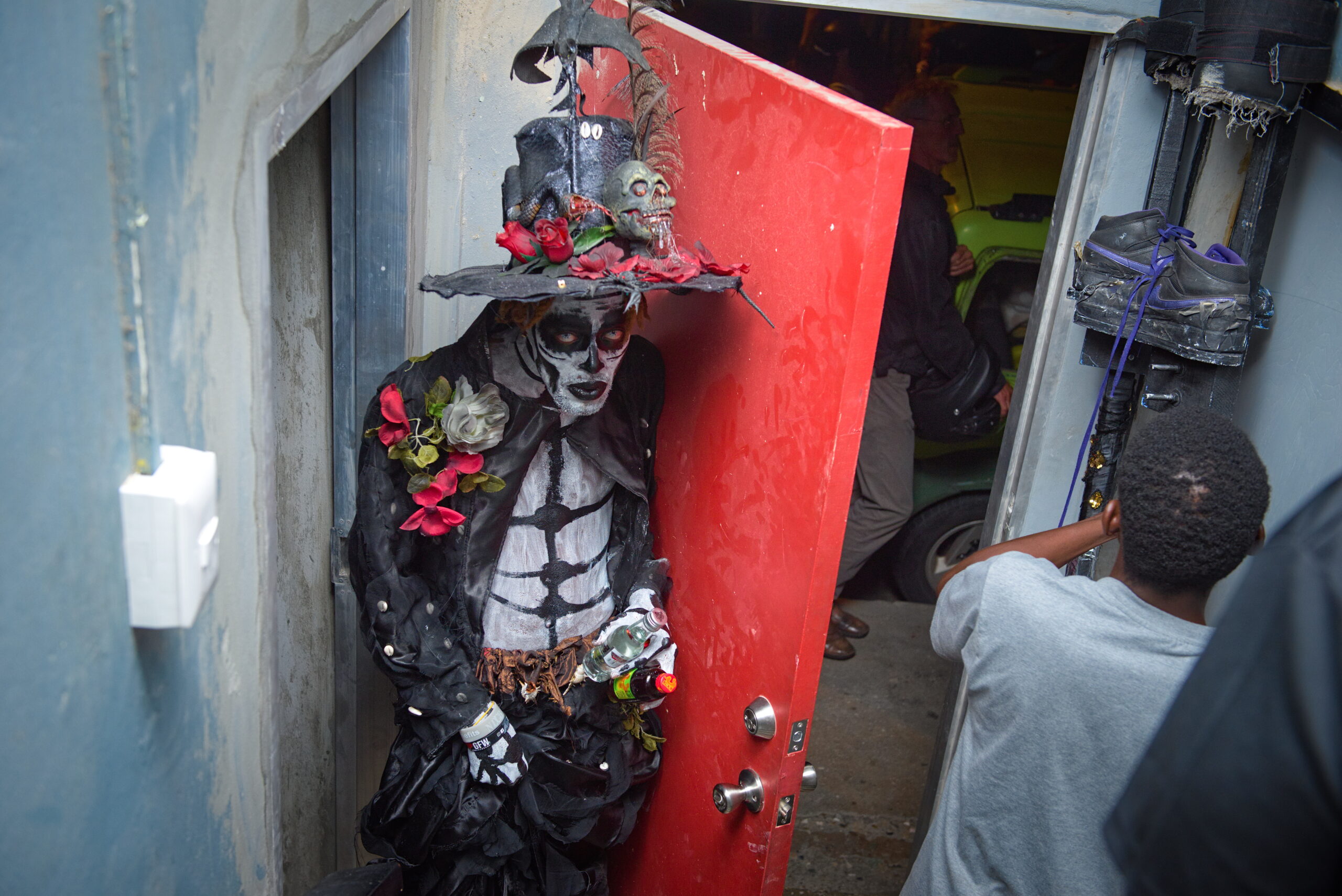 Young men, with the languid muscles and doe-eyes imagined by a Creole Caravaggio, talk in the dark back corner, over dirty coffee cups, with clients and wives, and men and women who like to flirt, attracted like bees to their honeyed handsome youth. But their minds are still drunk from last evening’s sweet Renegades rhythms and, though full of ideas and plans, not much work will get done today on their computers and inky machinery.

After a night’s toil, the huge cutting table is laid with fabric, cut out several layers at a time, folded and labelled to be carried to seamstresses in Arima in the rattling silver Land Rover, to be returned to the Queen's Park Savannah as shirts, just as the dust is choking All Stars pannists who will wear them under the floodlights.

And throughout the day people will come here to Granderson Lab. Authoritative middle classes, looking for magazine perfection, trying on muslin, which was made for people taller, slimmer, and with more grace. Treated with quiet tolerance by one designer and indifference by another, they might purchase, or be crestfallen that money cannot buy their dreams. Musicians and artists will pass by to try a costume, or retrieve a book, or just to sit and eat a carry-out lunch.

The occasional professor or writer, often quietly spoken, bringing history and perspective, will come to visit me, Mr. Alan, and will take notes about the alchemical mess tumbled on the floor and hanging from poles through the louvres; or perhaps an old Mas Man Sailor, to retrieve a headpiece he could not carry to Santa Flora in a taxi the night before. Visitors will call, hesitantly looking for the origin of something they caught a glimpse of in a newspaper report or a street parade, and neighbours will arrive with cake and requests for their children to be taught stick or supporters will bring sustenance of whisky and pizza. And a silent Belmont youth, after stacking shelves on Charlotte Street, will come and sit and wait for the spirits to arrive; they are always late.

But when they do, they will set to shredding crocus sacks, knocking foot plates, re-glueing shoes, prancing with a mask or threading beads, all limbs and banter and braggadocio, not averse to a row despite their shared upbringing on the hilly streets of San Fernando, where they learned to hold a foot behind their head while hopping on seven feet of pitch pine.

And on competition night or Carnival day, a small crowd will gather, and the street will watch them tie-up and dress on the neighbour’s wall, and she will proudly send them off with waves and good luck salutations, the tall spirits, glittering in their eclectic finery. A King and a Queen, a Seabird, Conjure-Man, a Black Indian, Fishermen, two White Goats, and the guardians of Haiti’s graveyards, leaving in the entrance scattered sweets, a flickering candle, and the wet floor of their libations.