'Many are making this journey on foot, so challenges abound' 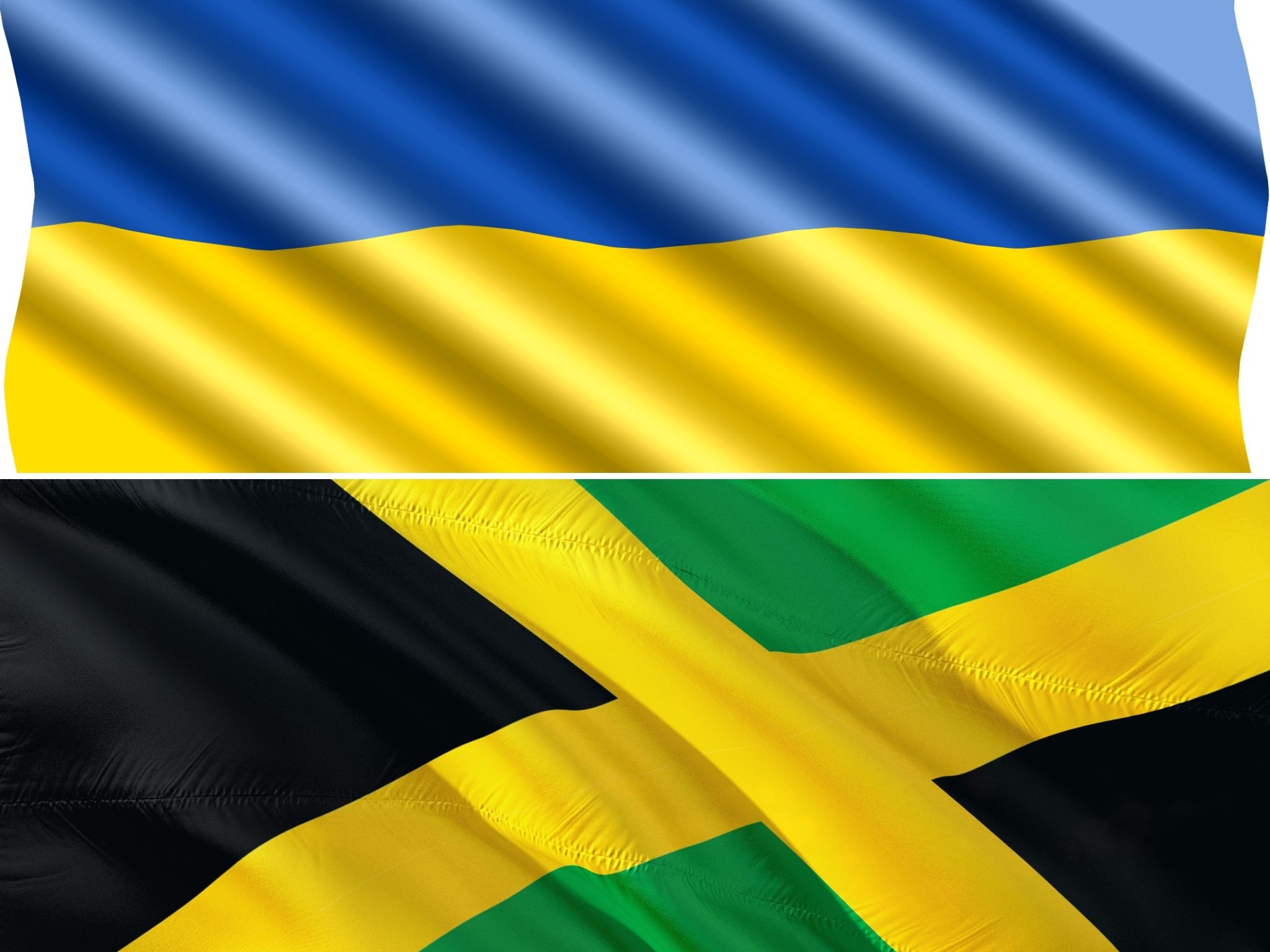 The Ukrainian and Jamaican flags, created from free Canva elements.

It’s a very long way from the bleak, snowy plains of Eastern Europe to the warm, tropical islands of the Caribbean — and yet, Jamaicans have been gripped by developments surrounding Russia's invasion of Ukraine, including dramatic personal narratives from compatriots there who are trying to get out.

Confusing messages, including pleas for help and accusations by some that the Jamaican government has not provided enough assistance for its citizens, have been reverberating across social media, with much of the concern centred around Jamaican university students in Ukraine.

Most of them are medical students, living primarily in Kharkiv, in eastern Ukraine, as the cost of studies there is a fraction of what it would be in the United States, or even at the University of the West Indies campus in Mona, Jamaica. One student described his struggle to board a train, while back home, students’ parents were consumed with anxiety over their children’s plight.

The issue was clouded by allegations on social media — which sparked considerable outrage — that the government had offered students loans to get back home, which they would have to repay.

Kamina said Embassy staff wz shocked at postings on social media cuz some ppl knew but we're posting information that they knew to be false.

Kamina Johnson-Smith is Jamaica's Minister of Foreign Affairs. At a press briefing on the evening of February 26, she reaffirmed the government's support for the students:

There is no requirement to pay anything back. There is no loan currently on the table. No loan.

The minister confirmed that 23 of the 42 students registered at different institutions in Ukraine were in Lviv, not far from the Polish border. She committed to underwriting subsistence costs for the students in Lviv and in Poland, as well as the costs of air travel back to Jamaica. The Jamaican Embassy in Berlin, she noted, had been in touch with the students since January, advising them of the ministry's recommendation that they should be prepared to evacuate if necessary.

One Jamaican student did just that, but refused to leave her cat, Victoria, behind:

However, controversy lingers, and one Jamaican journalist challenged on Twitter:

So let me ask … if you were overseas studying & war or a hurricane for instance threatened the country you elected to study, would you feel entitled to tax payers money being used to bring you home free of cost ?

On February 26, Irina Bruce, a Ukrainian citizen and tourism entrepreneur living in Montego Bay, posted an update on some students via her YouTube channel. She also defended the Jamaican government’s actions, pointing out that road transportation within Ukraine is impossible due to the absence of drivers, vehicles, and fuel shortages. She had personally tried calling various organisations — including funeral homes — to assist with transport, without success. “When you hear for seven years that Putin is about to invade Ukraine and then he doesn’t, you just don’t take another warning as seriously as you should,” she said, adding in her YouTube comments section:

The only person responsible for ALL [that is] happening right now in Ukraine is PUTIN and PUTIN alone. The scale of this attack is a historical event which we have not seen for 81 years and thought we would never see again. If somebody told me last week this would be happening, I would have never believed. […] Big up Ukrainians 🇺🇦 Big up Jamaicans 🇯🇲 Big up Ukrainian Armed Forces 🇺🇦 who ARE protecting Jamaicans 🇯🇲 in Ukraine during their evacuation. Big up Ministry of Foreign Affairs and Foreign Trade of Jamaica 🇯🇲 Big up the Embassy of Jamaica 🇯🇲 in Germany 🇩🇪 Big up POLAND 🇵🇱 the people of POLAND 🇵🇱 – they are the true brothers and sisters of UKRAINE 🇺🇦

Noting that Jamaicans in Ukraine, like thousands of others seeking to flee, still face difficulties, Minister Johnson-Smith stressed:

Many are making this journey on foot, so challenges abound.

This might be an understatement for some Jamaicans, including a businessman, his Ukrainian wife and their five children who, after having walked for 20 kilometres, found themselves stranded in a bus station after an unsuccessful attempt to cross the border to Poland. His account of their experience and the scenes he witnessed at the border were so distressing that the family subsequently turned back:

This is the experience of a Ukrainian refugee, as told by Jamaican businessman, William Massias.https://t.co/FNqu2ysXcy

The Foreign Affairs Minister, however, promised to follow up with the family:

The Government of Jamaica says it’s making arrangements that could see a Jamaican man and his family, turned refugees, be evacuated from Ukraine.

Jamaican businessman, William Massias, his wife and five children are stranded in the Ukraine city of L’viv.https://t.co/16viqoM0zA

Updates from the Massias family were being widely circulated via WhatsApp. On February 27, he wrote:

God’s angels allowed us to meet a Good Samaritan last night at the bus depot in Ukraine and she would not let us sleep there as there were no rooms at the inn, so she brought us and another family to her restaurant and converted it with beds. We were fed an amazing dinner and we all slept deeply after not sleeping for over 36 hours. We had breakfast and we are ready and rested to begin another journey towards Poland. I have been in touch with our Prime Minster Holness and our Minister of Foreign Affairs Kamina Johnson, who are [both] doing everything to help us. Your prayers and concern [have] encouraged us so much and my soul is in joy and peace despite all the pain and sadness I have encountered here in Ukraine.

The same day, the minister also provided an update on the student evacuation:

#UPDATE6A 24 Students left L'viv by bus towards an agreed Polish border crossing where we have made arrangements for them to be met. The journey by bus was however disrupted. I have explained below. Thankfully they are well and some are even in high spirits #indomitablespirit🇯🇲 https://t.co/501zKblKEX pic.twitter.com/MwEzJGHa4u

Despite communication glitches and controversy, the primary hope of Jamaicans at this point is for their fellow citizens to remain safe and to return home safely:

Praying for peace ☮️ that passeth all understanding.

Jamaica, along with the rest of the Caribbean Community (CARICOM) has condemned Russia's actions in Ukraine, saying they are in “clear violation of the United Nations Charter, particularly the obligation to respect the sovereign rights and the territorial integrity of States.”

Update: On February 28, 2022, it was confirmed that the Jamaican students had successfully crossed over into Poland.