Fleeing Kyiv: How we escaped the Ukrainian capital as war broke out

A group of friends escapes Kyiv after Russian army's attack 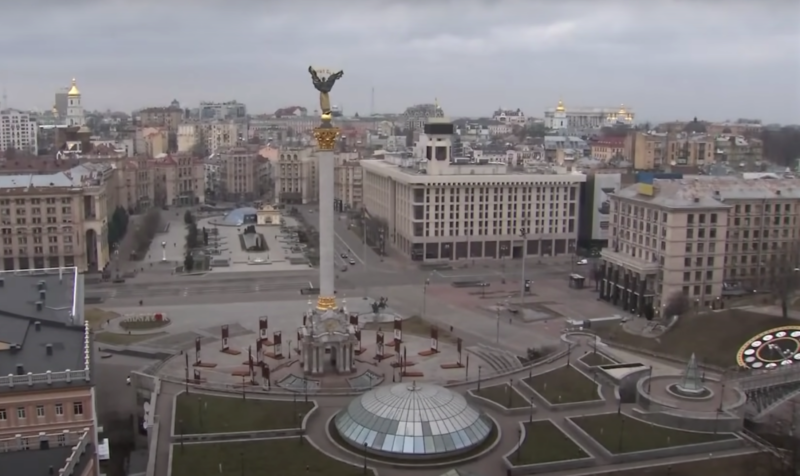 Kyiv, Ukraine on February 25, 2022. Screenshot from video by PBS Newshour on YouTube.

This article by Tetiana Bezruk appeared on OpenDemocracy on February 27, 2022. It is republished as part of a content-sharing partnership and has been edited to fit the GV style.

Eight years ago Sofia, Dima, Vika, Andriy and Maryna left their hometown in Ukraine's eastern Donbas region after Russia took control of it in 2014.

The group of friends moved to Kyiv. On February 25, they left the Ukrainian capital after the Russian army started shelling the city.

Tetiana Bezruk, a correspondent for openDemocracy, drove with them out of Kyiv to Khmelnytskyi — a town 350km to the west — to find out what it’s like to flee your home for the second time in eight years.

It’s six in the morning in a large house outside Kyiv. In a big room with a fireplace, which has not yet been lit, 12 people are asleep on the floor. The curtains are shut. There is absolute silence.

I get up. I hear something buzzing over the house — most likely an airplane. I remove my blanket, take my jacket and phone, and run out into the corridor. There are several people in front of me. We go down an iron staircase in single file to the basement. It is cold and damp there, but there are some wooden boards on the floor — the owners of the house prepared them so that there was something to sit on.

The phone connection is not very good, but you can read the news. The Russian military are shelling residential areas of Kyiv. On social media there are photos of the night sky riddled with glowing lines. It looks like fireworks, but it’s not. Sofia distributes warm blankets to everyone.

Little Diana* is in the basement with me. She is eight months old. She is very sleepy in her father’s arms. Diana is wearing a plush children’s blanket, with some kind of cartoon characters on it. She looks at me and smiles. Right here in the damp basement, the girl’s mother is trying to change her nappy. Diana is stoically silent and does not move.

A small distance away from Diana is Oleg*, six. He is wearing a green sweater and a jacket. Oleg is playing on his phone. Behind Oleg are two high school boys sharing a blanket and laughing. Diana, Oleg, and the other kids here are the children of parents who had to leave their hometown in Donbas. Some moved to Kyiv as children; Diana and Oleg were born here. Until February 2022, they did not remember or know the war.

Sofia and her friends left their hometown in 2014 after the city was occupied by pro-Russian militants in the wake of revolution. They got into a car and drove the 800km to Kyiv. That summer, they lived in a large apartment all together. Eight years on, they are on the road again.

We get in the cars. We are going to leave the Kyiv region. As we approach the car, we hear a loud sound just as we get to the doors. An airplane? We look at each other. Then it comes again. The strong, loud sound of an aircraft overhead. We can’t see where it is. It’s unclear how close it is. We get in the car and go.

There are a lot of cars on the roads. Some drivers move into the opposite lane to overtake. In the evening, the sky is overcast with an orange-pink colour. For the first time, I feel able to look at the sky — not to listen to the sounds coming from it, not to look for a plane, but to look at the sunset. Behind us are several dozen cars. Everyone is leaving.

“We need a rope,” Dima* says. Oil has begun leaking from one car and we have to either look for new transport in the middle of nowhere, or pull the car with a rope. We decide on the latter. Two multi-colored lines are tied to one of the cars and then hooked on to the second, and we set off.

We arrive in a village in the Khmelnytskyi region late at night. My friend has relatives here. She has not seen them for more than 15 years. They have agreed to let us spend the night as our drivers are tired after a day of driving.

The woman who has agreed to give us shelter is called Lyudmyla*. She meets us at the entrance to the village. We park our cars in the yard outside her house and go in. It’s warm. The stone stove is lit. Lyudmila has cooked us soup but I just don’t want to eat — I want to sleep.

We start getting ready for bed. The children and their mothers sleep on the beds, the rest are on the floor. Someone spreads the camping mats they brought with them.

Our host gives us warm blankets. I take one and lay it on the floor. I put my hat on. There’s a draught from the window. I cover myself with my winter jacket, dusty from the road. I don’t remember how the evening ends. I fall asleep in about two minutes.

In the morning, the room looks almost like a beach with people relaxing on it. But there is no time to relax.

“We’re going,” Vika* says to little Oleg, who is lying down comfortably on the bed covered in a blanket.

“Mum, where are we going again?” sleepy Oleg starts crying.

“OK, OK. I’ll tell you,” Vika answers and begins to explain to her son where they are going and why. The boy calms down and puts on his jacket.

Lyudmyla begins handing out apples to us. “Can I give you some salo [a traditional food of cured pork fat]? Does anyone want milk?” she asks. We decline and ask only for matches, if possible, because we have not seen a single shop along the way. Lyudmila gives us several boxes.

We are just leaving when some other residents arrive at the house. One man has brought us a canister of gasoline. It will come in handy for us, as you can’t fill up at all of the stations — they’ve run out of fuel. Finally, Andriy*, who also left Donbas in 2014, hugs and thanked all the women who have gathered outside the house. We move on.

We arrive in Khmelnytskyi. The staff at a restaurant have removed the tables on the second floor and laid mattresses out so people can rest from the road. My companions drive on. “See you soon,” we say to one another. And I hope we do. I hardly read the news that day, and open my phone only in the evening. The Russians have shelled residential areas in Kyiv again. My friends are hiding in basements and shelters in the capital. Some journalists I know have signed up for the territorial defence.

Later on at night, when I am about to go to bed, I try to work out what day it is. Friday? I can’t tell. It’s Saturday. The fourth day of the war, when Russian tanks began shelling towns all over Ukraine. 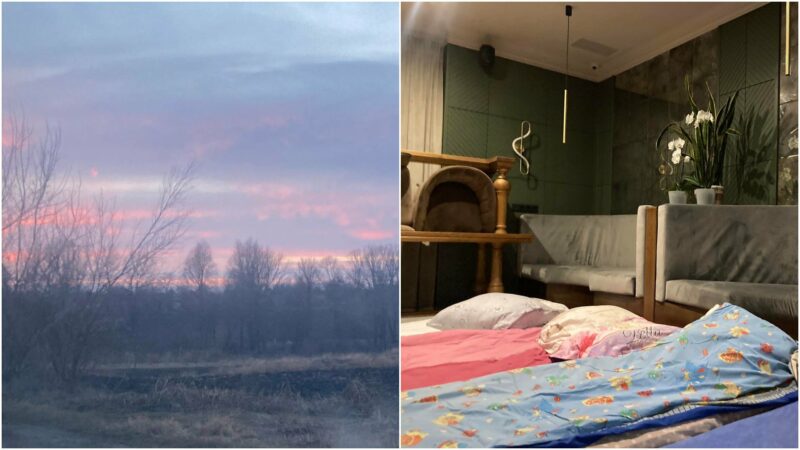 * Names have been changed to protect the individuals in this report.